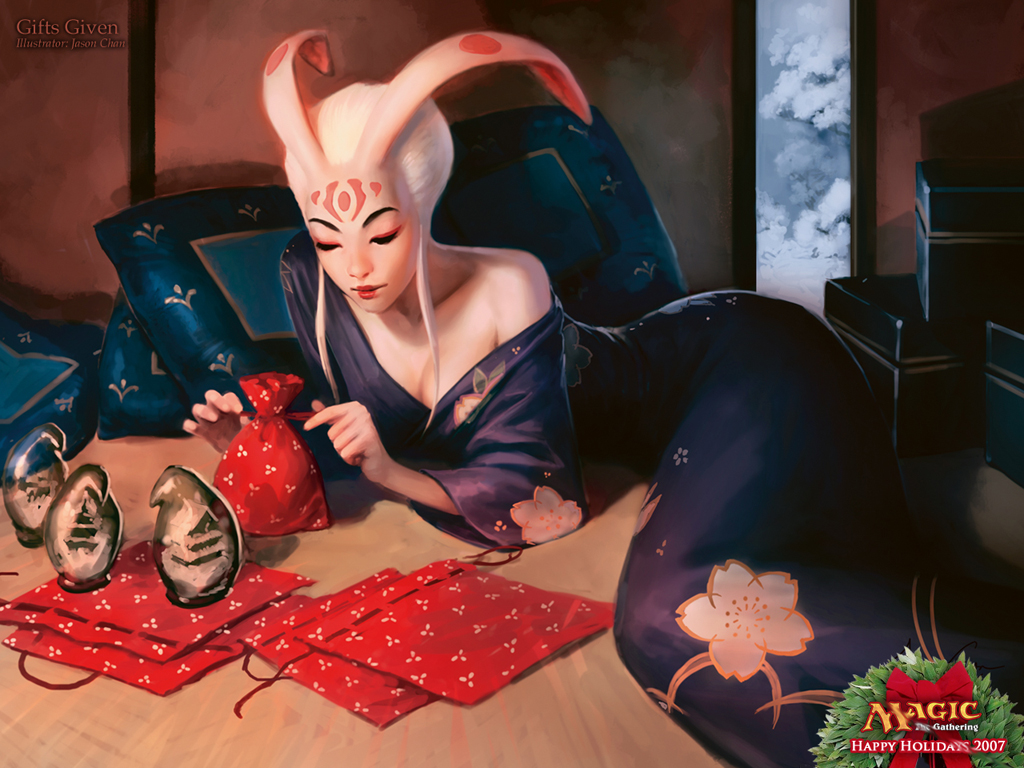 Happy Holidays! I hope everyone is enjoying this holiday season with family, friends, or at least a few days off from work. I myself will enjoy eleven consecutive days off from work—probably one of the top five longest times off in my entire career. When this combines with some wintry weather, it truly becomes my favorite time of the year.

But just because I’m off from my day job doesn’t mean I’m taking a break from writing! No way! There is still so much to discuss when it comes to MTG finance. That being said, in light of the holiday spirit I am going to shift topics a bit. I had originally planned on writing a very serious piece about risk tolerance, life circumstances, and why it’s critical to get some other areas of life in order first before going deep on MTG finance. Such a topic, however, seems way too serious given the timing.

One of my favorite sets growing up playing Magic was Ice Age. These booster packs were still readily available when I started playing. I love the snowy, wintry theme of the set too because winter is my favorite season of the year.

Sadly there aren’t many cards worth speculating on from the set. It is simply too underpowered. If someone insisted to me that they wanted an Ice Age target, I’d probably pick one of the fifty Reserved List cards from the set. Just look at what’s low in stock on TCGplayer and pick up a few copies.

Fortunately there are far more interesting targets outside of Ice Age block. For starters, did anyone notice the buyout on Winter Mishra's Factory?

The Winter printing of this popular card has always demanded a premium, but it looks like that premium is about to grow even further. This feels like market manipulation to me, but given the rarity and popularity of this card, I do expect the price to linger higher going forward.

Want a more recent winter card that I think has some real potential over the long term? How about the winter version of Extremely Slow Zombie, in foil? 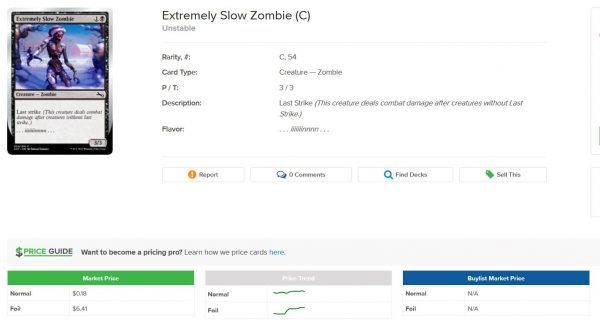 I can’t advocate buying into nonfoils—not yet, anyways. This is just a common, after all. But in time these will likely grab casual collectors’ attention because of the fun seasonal theme of this card. I predict foils of the winter version will be the most valuable in the long run.

When the holiday promos initially launched, I thought they were brilliant and exciting. Fun, holiday-themed cards printed in rare quantity? Sign me up!

It all started with Fruitcake Elemental back in 2006. 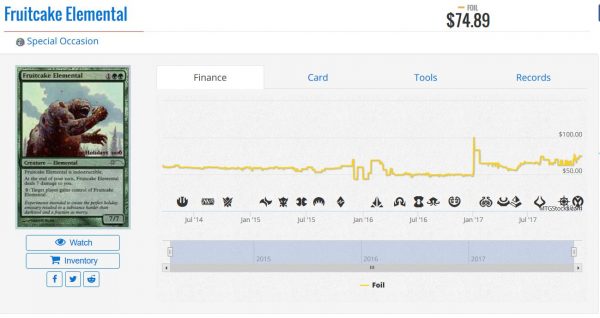 While a novelty at first, we’ve now seen twelve of these printed, one each year since inception. As you can see in the chart above, some of these would have been dead money had you speculated on numerous copies. Though, I suppose like fruitcake, these specs won’t ever be reprinted and “go bad.”

Bad jokes aside, there is one of these that is a little more in-demand than the rest. My personal favorite (and the only one I own a copy of) is Gifts Given. This is a popular cube card and has crept up from $120 to $150 over the last few years. This is hardly an exciting game to write home about, but the upward momentum is at least there.

Some of the other holiday promos may also be worth looking at, but it appears most of them have seen a downward price trajectory over the past few years. I think with the printing of a new holiday card each year, the allure of these promos is starting to wear off. As usual, Wizards tends to overdo things and this may be yet another example of how they tend to saturate markets after discovering a novel idea.

If you want a Gifts Given or Fruitcake Elemental for your collection, I don’t think you’ll lose money on them. But as for the newer holiday promos, I think you can take your time completing the collection.

Digging a little deeper into obscurity, one idea that I have a personal appreciation for is sealed Coldsnap product. Why, you ask? Because Coldsnap was tremendously unpopular when it was released; it was undersold, and therefore underprinted. The set also came out before Magic’s most recent boom, so the amount of product relative to the player base is way below par.

I would recommend having a look at Coldsnap booster boxes. It’s a steep investment to pay $365 for a box of this set, but take a quick look at the box prices I see on eBay. The curve is very steep:

Now, looking at eBay completed listings I see only one box has sold over the past few months. So this is going to be an extremely slow mover. Probably not the ideal investment vehicle given the opportunity cost. But you can see that once the cheapest few boxes dry up, you’re looking at some real movement. It’s also worth noting the cheapest box on TCGplayer is $420. If you’re the type who enjoys collecting old product and investing in sealed boxes, don’t overlook this set.

Speaking of Coldsnap, here’s a fun fact. Did you know that the Coldsnap Fat Pack came with the first book of the Ice Age series, The Gathering Dark? This book, originally printed in 1999, was essentially reprinted for these Coldnsap Fat Packs.

This was a terrific book written by my favorite Magic author, Jeff Grubb. He did a phenomenal job capturing the feel of the Ice Age lore in Magic. For nostalgic fans of this set, I’d highly recommend it.

But I must warn you of something before you make the commitment. You see, after reading The Gathering Dark you are likely going to want to read books two and three of this series: The Eternal Ice and The Shattered Alliance. Both of these books are also written by Jeff Grubb, and are therefore excellent reads. They even have my all-time favorite Magic character, Jaya Ballard!

Here’s the problem: Wizards may have increased supply on The Gathering Dark by putting these in Coldsnap Fat Packs, but they didn’t reprint the second and third books of the series! Therefore there is far more demand for the books than there is supply, leading to strangely high prices for mass-market paperback books.

The Eternal Ice, the second book in the series, will cost you around $20 for a fairly used copy. Given that most brand-new fantasy paperbacks tend to retail in the $8-$10 range, you're already going to have to hold your nose to purchase this 17-year-old book. But that’s nothing compared to the rarest, third book in the series. Take a look at some recently completed eBay listings for The Shattered Alliance. 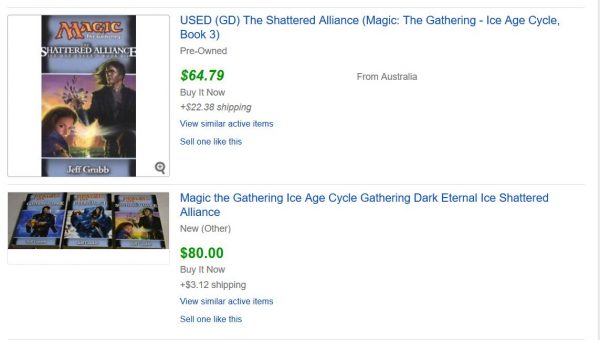 That’s right, the third book of the series is worth over $60. In fact I see two copies on eBay in the $60 range, and then the next cheapest jumps to $80. For that price you’d expect to receive a collectible hard-covered copy signed by Jeff Grubb himself! But instead all you get is a used paperback fantasy novel.

Now you may think this is far too niche to speculate on, and you’re probably right. But here’s what I’ll leave you with: check out your local used book stores the next time you have a chance. I have found two copies of The Shattered Alliance at my local Half Price Books in the four years I’ve been going to the used book store.

These books are out there: in moms’ basements, in boxes of old library books, and everywhere in between. Every once in a while one will surface, and being completely ignorant of this market it will be priced at just a few bucks as most used fantasy paperbacks should be. That’s your chance to get a copy, enjoy a wonderful story about Magic’s earliest block, and make a few bucks along the way!

Or you could just buyout the market of this book to prey upon completists who need to know how the series concludes [maniacal laugh].

While lighthearted, the prospect of speculating on winter-themed cards isn’t so far-fetched. After seeing the winter printing of Mishra's Factory get bought out just two days before Christmas, I realized that Magic speculators aren’t taking the holiday season off. Neither am I. I genuinely think investing in some of the ideas presented above will make you money over the long term.

Are these the most exciting targets for 2018? I highly doubt it. There will be plenty of new ideas as next year unfolds, and you won’t want a ton of capital tied up on these slow-moving assets. But if you appreciate the winter and its holiday season as much as I do, you may get some appreciation from these ideas along the way. What better way is there to speculate on something than to enjoy it for a few years first before selling for profits? That’s the way I like to do Magic finance a lot of the time, and it may prove attractive to you as well.

Especially the books. Don’t write those off because they really are quite good.