Below are the total set prices for all redeemable sets on MTGO. All prices are current as of January 8, 2018. The TCGplayer low and TCGplayer mid prices are the sum of each set's individual card prices on TCGplayer, either the low price or the mid price respectively.

Standard prices are lower this week in advance of the release of Rivals of Ixalan (RIX), with the exception of Ixalan (XLN), which has seen a nice bump up in the past month. XLN and RIX are the next two targets for full set purchases in Standard, and the recent price strength for XLN has got me wondering whether or not the best buying opportunity on this set is behind us.

To further my research, I pulled up the data for Battle for Zendikar (BFZ), Shadows Over Innistrad (SOI), Kaladesh (KLD), and Amonkhet (AKH) to see how the prices of these sets fared before and after the release of their accompanying small set. Week zero is the date of the release of the small set of the block. Have a look below to see the trends. 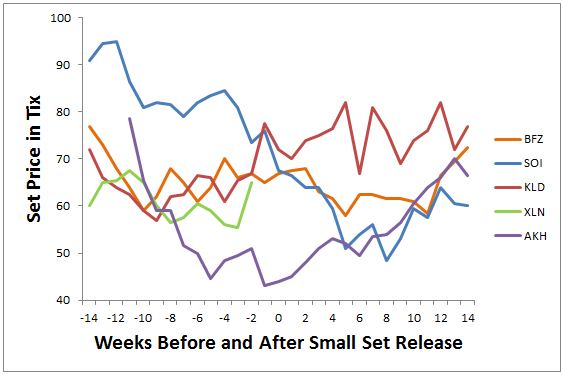 SOI has a persistent down trend that occurs before and after the release of Eldritch Moon (EMN). SOI doesn't bottom in price until it stops being opened in draft in the fall of that year. It would have been correct to wait until early October to be a buyer of that set. KLD is almost the opposite, in that a price bottom occurs almost two months prior to the release of Aether Revolt (AER). AKH finds a price bottom almost perfectly coincident with the release of Hour of Devastation (HOU). Lastly, BFZ doesn't have a real clear trend or bottom, as it bounced around before and after the release of Oath of the Gatewatch (OGW).

For XLN's future price, I don't think that it will follow in KLD's footsteps with a continuous rising trend. KLD has turned out to be one of the most overpowered Standard sets in recent memory, and XLN is just not on that level. I also don't think XLN will be heading below 50 tix anytime soon, like AKH did when it found its price bottom. Unlike AKH, XLN has no masterpieces, which means that the value of the set accrues to the cards of that set and not to reprints. All things being equal, a set without masterpieces will hold a higher average card price than a set with masterpieces.

I will be monitoring XLN prices for an opportunity to be a buyer of full sets. A dip into the 55- to 60-tix price range will be my signal to start accumulating this set.

On the topic of the upcoming banned and restricted announcement, I believe that Standard will get the benefit of the doubt and that there will be no bans this time. The reason to do this is to keep the focus on Modern in advance of the Pro Tour and to give RIX a chance to impact the metagame. If energy-based decks continue to dominate, I would look for a ban in the weeks after the Pro Tour. Regardless, the market is anticipating a ban that will hurt Temur Energy decks with Botanical Sanctum and Spirebluff Canal at three-month lows.

This week, it's important to consider the twenty-four hour "preview" event for Rivals of Ixalan (RIX). Although it's not being called a prerelease, it's actually an unprecedented event on MTGO. Never before have you been able to play with the new set on MTGO in advance of the paper prerelease events.

Examining this one event would give you the idea that it's a big shift in terms of strategy for WotC. Previously they had been very cautious around prereleases and MTGO, always not wanting to take away from paper events around a set's release. In recent years, though, they have been moving up the release dates, allowing pros to use MTGO for Pro Tour testing, and this is another move in that direction. All that being said, the official release date on MTGO is unchanged, that being the Monday after paper prereleases.

Clearly, Wizards of the Coast has abandoned the notion that an early release on MTGO damages paper prerelease attendance, or at least they have decided it's a net benefit to their own interests. I fall on the side that the people who play MTGO and the people who play paper do not overlap to a great extent. This preview event is just not going to noticeably affect paper attendance in my books. There might even be a net increase in attendance as MTGO players seek to press their short-term advantage and head to their local game store to play in the prereleases this weekend. Now, if you want to play RIX next Saturday, you will only be able to do this at your local game store.

WotC is finally embracing the potential of a digital strategy in a meaningful way with this advanced look at RIX Sealed as well as the attempts to incorporate and popularize streaming. Of course, there is also the push towards Magic Arena as another marker of their intents. I still believe that Magic Arena and MTGO will be catering to two very different markets and that the two products will be able to coexist.

This week, demand for XLN boosters is going to be cut down by the release of RIX as drafting goes from triple XLN to RIX-RIX-XLN. With the price of an XLN booster on the secondary market at around 2.5 tix currently, there is an excess supply of this booster and prices are bound to fall when the preview events hit on Thursday, and then fall again with the proper release of RIX on Monday. There is no buying opportunity in XLN boosters pending, but there is a short-term opportunity on RIX boosters that speculators and players should be aware of. See more below in the Trade of the Week.

There is a great trade available this week for those with the time to grind a few tix. The RIX preview events are tix-only events that pay out in RIX boosters only. Anyone who wants to complete multiple leagues will be tempted to sell there prizes for tix in order to play again. With no way to use the boosters in the short term to enter events except through selling them for tix, there are going to be "useless" RIX boosters entering the market. Once Monday hits and RIX is actually released, those boosters will become more valuable as you can then use them for drafting and Sealed Deck leagues.

A good speculator and prudent players will realize this and do the exact opposite of what the impatient or tix-constrained players are doing. On Thursday, buy any RIX boosters that are 3.5 tix or less. Once RIX hits on Monday, the price of a RIX booster will get to around 4.0 tix. You'll be restricted in this trade by the number of transactions you can complete, so it's really grindy in that sense. But for those with a little extra time or just the curiosity about how markets can be distorted in the short term, it's a great exercise.

I'll be playing in the preview events, and in between matches I'll be looking for any RIX boosters on sale that I can find. As long as they are around 3.5 tix or lower, I'll be a happy buyer.