Hi, guys! The full spoiler for Rivals of Ixalan is out.

This week, we are going to discuss several singles that will be affected by the new release. We'll especially be on the lookout for possible synergies between existing cards and new cards from Rivals of Ixalan. As usual, it's very hard to get new cards at good prices when they are freshly released on MTGO, so I will be focusing mainly on existing cards that will be impacted by the release of the new cards. 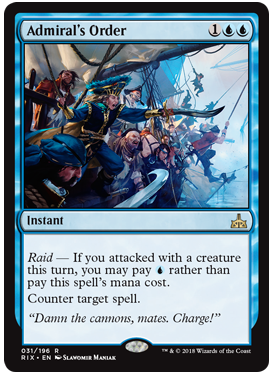 Admiral's Order is my favorite card from the set. Nowadays in Standard, we are paying (1UU) for unconditional counter spells like Cancel and Disallow. With raid, Admiral's Order can counter a spell at U, which is a very good thing in creature decks. I'm speculating that Temur or Sultai Energy variants will play this card in their 75s. The discounted cost lets us have more mana remaining to deploy our other threats as well as defend those threats from being countered or destroyed on our turn. This card is especially good against Settle the Wreckage.

So what to do? Put your attention toward components of Sultai and Temur Energy decks. For example, Bristling Hydra, Glint-Sleeve Siphoner and Glorybringer are the pillars of the various Energy builds and are pretty likely to go up in price if Admiral's Order does indeed make these decks better.

If you look at the price trend of the above cards, they are all at respective low points right now on MTGO. My suggestion is to watch these cards closely and make your move when you think their prices are at the absolute bottom. 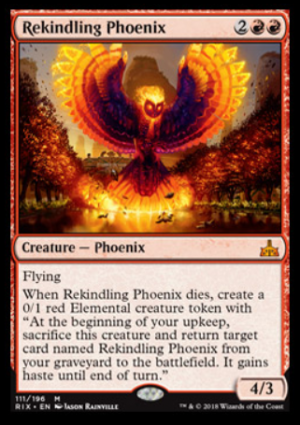 Next up, we have a Phoenix that has everything a Phoenix should have: flying, sometimes haste, recursion.

The first thing that comes to my mind when I see this card: Big Red. In recent weeks, Standard Red Aggro and Ramunap Red have gone more towards a more midrange build by having big spells like Chandra, Pyromaster, Glorybringer and Sand Strangler. I think Rekindling Phoenix is good in terms of card advantage and the ability to attack and defend. Card advantage is something we always get from Phoenix creatures like Chandra's Pheonix and Ashcloud Pheonix, as the opponent needs to spend more resources or specific answers to deal with them permanently.

As for the ability to both attack and defend, first, Rekindling Pheonix has a reasonable body at four mana, where it can trade with most creatures in the format. And because it returns with haste, you can play it, block and trade with it, and have it return on your next upkeep ready to attack. I believe [card]Rekindling Pheonix can bring Ramunap Red to the next level by out-midranging other decks in the format.

The cards I would suggest investing in related to the Phoenix is Bomat Courier and Glorybringer (the latter of which was of course already recommended earlier in this article). If you look at Bomat Courier's price, it fluctuates a lot between 0.5 and 1.4. Despite being a cyclical pattern with a range of less than 1 ticket, we can generate plenty of revenue by buying and selling at optimal times. And if Big Red with Phoenix really becomes a thing, potentially Bomat Courier will also increase in price along with the rest of the deck. 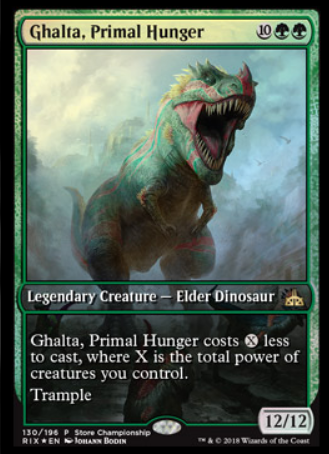 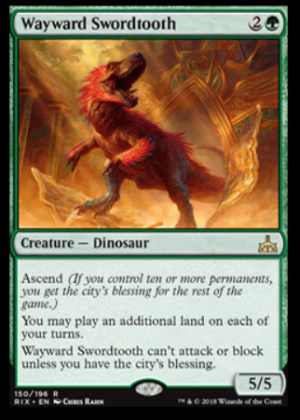 Dinosaurs? Oh yeah, how did Dinosaurs do when Ixalan released? If I'm not mistaken, we only saw a few green-red builds that did well in the early season, and then we never saw them again. Now in Rivals, we have even more Dinosaurs. Let's have a look at Ghalta, Primal Hunger and Wayward Swordtooth. Both of them seem designed to be played in a ramp deck that aims to cast Ghalta as soon as possible. This may or may not end up being any good, but for now, let's look at the forgotten dinosaurs from Ixalan.

Here we have all the big creatures that fit our "ramp into a 12/12 trampling dinosaur" deck. Assuming we play Servant of the Conduit or another mana dork, then either Rhonas or Swordtooth on the next turn, it's possible to cast Ghalta on turn four! Maybe an early 12/12 trampler is not as broken as Aetherworks Marvel into Ulamog or Emrakul, but that is still very hard to deal with.

I suggest you guys to give Dinosaurs another chance by buying them where you think their price is reasonable. For example, Ripjaw Raptor and Rhonas, the Indomitable both seem reasonably priced right now, each at a respective low point.

If you think Green-Red dinosaurs is a better build, you would have more options like Regisaur Alpha and Hazoret, the Fervent.

Next there's a very interesting enchantment cycle in the new set:

There are tons of possibilities in this cycle of enchantments. I will give some examples, and I'm pretty sure you guys can think of more! 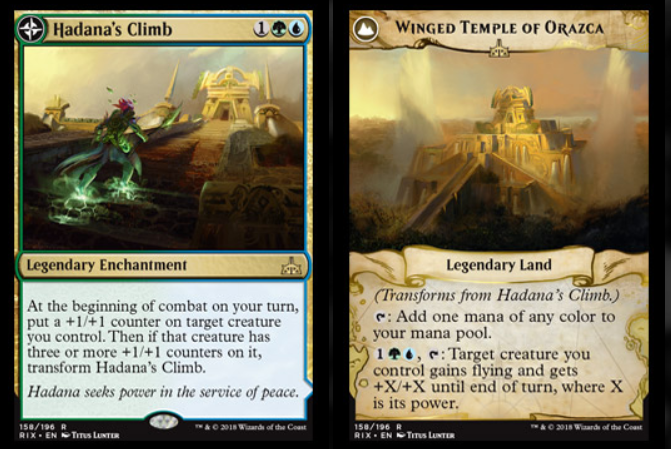 This enchantment is designed to strengthen Blue-Green Merfolk and Sultai Energy. There is a chance that this card is even Modern playable in decks like Bant Knightfall. And, if you haven't notice yet, this cycle of enchantments allows us to splash/fix colorsm as the transformed side produces mana of any color. Right now, I can only suggest investing in Blue-Green Merfolk and Sultai Energy pieces, as I'm still unsure of how good this might be in Modern. 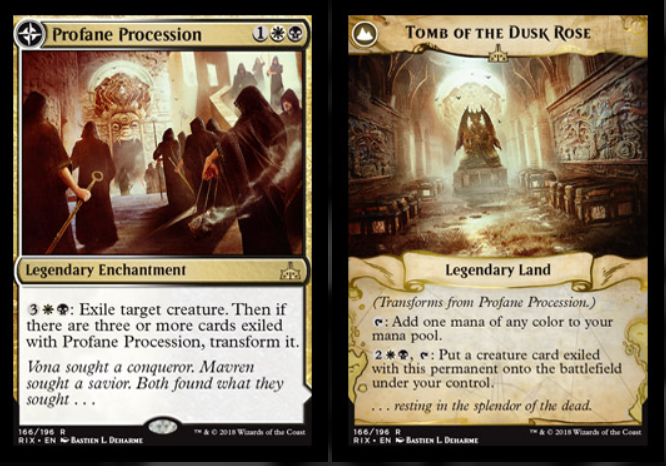 At first glance, this card is definitely a bomb in Limited, as unconditional removal is very rare, even more so of the repeating variety.

In Standard, if I were to play this card, it would definitely be in either Esper Approach or Esper Gifts. Both of these decks don't play good creatures and rely on either Approach of the Second Sun or God-Pharaoh's Gift to win. With Profane Procession // Tomb of the Dusk Rose, these decks have yet another way to win, in case said win conditions are exiled or somehow can't quite get there.

Furthermore, both of the decks have Champion of Wits and Search for Azcanta // Azcanta, the Sunken Ruin to filter draws. That way, if this enchantment is not needed, they can just throw it into the graveyard. With the ideas mentioned, I suggest investing in cards from these decks; for example, Champion of Wits, Fumigate and the blue-white lands.

Alright, that’s all for the week. Thank you all for reading, good luck picking singles to invest in and I will see you guys again soon!

One thought on “Insider: MTGO Opportunities in Light of Rivals of Ixalan”