Hey, guys, and welcome back!

Last week, we talked about how Rivals of Ixalan will potentially affect Standard. Today, we are going to talk about the set as it relates to Modern – which happens to be the format of the Rivals Pro Tour.

A very obvious archetype that Rivals of Ixalan will boost is Merfolk. With plenty of blue-green Merfolk creatures printed in this and last set, this green-splash version of the tribal deck will definitely be on every player's radar. Furthermore, with green in its mana base, there might  be a version of the deck with Collected Company. 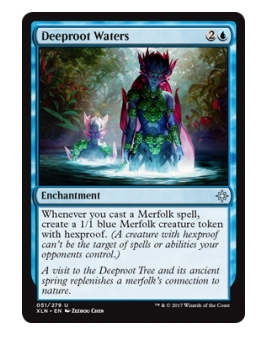 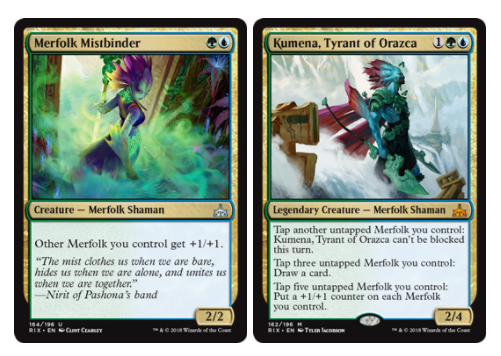 Above are some of the cards that might see play in Modern Merfolk tribal, but let's focus especially on Kumena. This three-mana Merfolk lord provides incremental advantage as we accumulate more fish in play. The second ability of Kumena reminds me of Cryptbreaker from past Standard, and giving a deck the ability to draw cards is especially good for an aggro deck. Currently in the metagame, we rarely see Merfolk players, although the deck is good, so I'm not sure why it's not popular.

Assuming that popularity increases after the upcoming Pro Tour, what are some existing Modern cards that we can take a look at? As a baseline today, we will only look at cards that are priced at more than 1 ticket per playset:

Master of Waves and Lord of Atlantis are already at their respective high points, which is not a recommended buy-in scenario.

As for Cursecatcher, this card is the must-have one-drop in the deck (besides Aether Vial). Looking at its trend line, currently the price per copy is still below 1 ticket, and is beginning to dip after a small increase last month. I think this is our chance to buy in to playsets of Cursecatcher for investment. This card has potential increase to 2 tickets, as it went up to 2.5 tickets in January 2017 and 2 tickets in April 2017. Now consider the very real possibility that with the Rivals of Ixalan release, Blue-Green Merfolk will make Cursecatcher spike again.

Another card here is Master of the Pearl Trident. It does basically the same thing as Lord of Atlantis except that the market has more supply of this card than the other. Interestingly, Master of the Pearl Trident spiked at different times compared to Cursecatcher; in Master's case, in February 2017 and July 2017. So we know if one of these spike, the other might not, and vise versa. According to the trend, the last times Master peaked at 4 and 3 tickets, respectively. Therefore, at the current price of 1.28 tix, picking up copies as speculation in anticipation of Blue-Green Merfolk making an impact in Modern is a move I advise.

Besides all the fishes, lets look at some other cards that are potentially being played in Blue-Green Merfolk.

Fast lands are among the most commonly played lands in Modern. As Standard is slowing down, and there's a potential that Standard Energy deck might get a nerf in the next B&R, Botanical Sanctum's price is going downhill. When the price reaches the bottom, do remember to buy in playsets for the deck we've already discussed so much.

Collected Company decks were very popular last year, although there are a few different versions of the deck in the metagame. As we can see in the graph, the price can easily go above 20 tickets when the deck's variants are heavily played. Thus, I can say now is the golden opportunity to get your playsets, either for your own use or as speculations. A four-mana spell to put six mana's worth of permanents into play is just too strong in Modern. I don't think the price will decrease much from 17 tickets. With Collected Company, we have the opportunity to use Kumena's abilities after the spell resolves, so this might also affects how the opponent play against you. For example, whether they should kill Kumena or keep their removal up for another threat, like the lords. 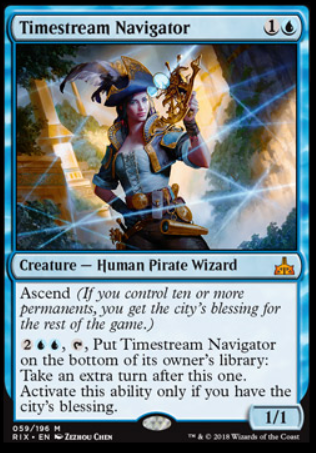 Timestream Navigator seems like it will be able to fit into the mono-blue Turns deck. The Turns deck can hit Ascend pretty easily in my opinion, between Howling Mine, Dictate of Kruphix and lands. In my opinion, this card might be added to the deck to increase the consistency of the combo. Since the Turns deck is not that popular right now, we can see this potential addition to the archetype as an opportunity to invest in other pieces of the deck.

Dictate of Kruphix and Howling Mine are the engines of the Mono-Blue Turns combo deck. The effect is one-sided when the extra turns spells are chained together. The deck usually plays six to eight copies total of the two cards to facilitate drawing into extra-turn spells and the lands to play them. Both these cards are very cheap right now, at 0.03 ticket and 0.4 ticket, respectively. Even if you don't see Timestream Navigator as potential addition and boost for the deck, these are still pretty good investments, especially Howling Mine. These seem reasonable to buy for speculative purposes.

Part the Waterveil is the cheapest extra-turns piece in the entire deck, but it's also the win condition. The deck wouldn't be as good without this card. If we look at the history of this card, it peaked at 10 tickets while it was still Standard legal. After rotation, the price dropped very quickly, but immediately reversed and the hit 5-tickets mark. Currently at 0.25 ticket, I think there's a big chance that we can earn plenty of tickets by investing in this card right now. The Modern metagame shifts very quickly, so the more decks we see from week to week, the higher chance we will see the return of the Mono-Blue Turns deck, and that is when our specs will pay off for us.

Whenever we talk about blue, I always want to highlight this card: