I normally prefer waiting until spoiler season is over to begin publishing think pieces on the upcoming cards, but had to make an exception this week. The announcement of Merfolk Mistbinder in Rivals of Ixalan has profound implications for my Modern deck of choice. 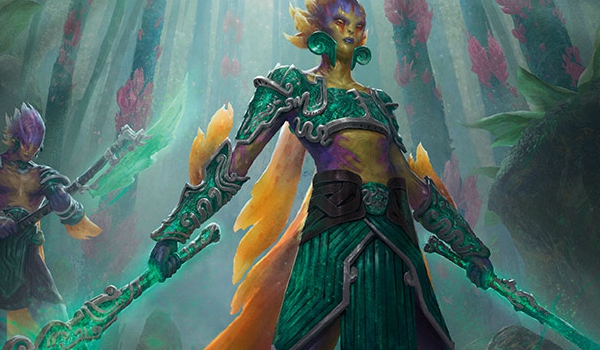 While adding green to Merfolk is something pilots of the deck have experimented with since the release of Kumena's Speaker and Merfolk Branchwalker in Ixalan, this card’s release imparts a degree of legitimacy I believe the splash lacked until now. In this article, I will provide a brief summary of Merfolk’s dalliance with green thus far, cover the splash's strengths and weaknesses, and analyze the boost Mistbinder offers the archetype.

While Merfolk has existed in Modern for most of the format's lifespan, UG Merfolk came about when Ixalan brought us Kumena's Speaker and Merfolk Branchwalker. The support structure afforded to these cards by Merfolk’s lord effects and Aether Vial made the green splash appealing in ways no other variant has been before them; while some players have dipped their toes in white, black, or even red, none of those variants have stuck. With these Merfolk and the promise of further support in green to come, UG oozed with potential.

In order to incorporate Speaker and Branchwalker, UG pilots shaved the top end of the deck’s curve—high-cost cards like Master of Waves and Merrow Reejerey were trimmed or outright cut from the list in order to make room for the green newcomers. The switch streamlined the deck and make it more consistently aggressive in the early game, all while responding to a newfound dissatisfaction with the pricier creatures—Master of Waves especially took a hit when Fatal Push emerged to compete with Lightning Bolt as Modern’s one-mana removal spell of choice, though the extent of how much Push usurped Bolt is debatable. I still consider the Master a very potent card in the Merfolk arsenal, due to Bolt still topping the format staples chart; Jordan's not quite as bullish on the card. Because of this protean landscape, some Merfolk pilots decided to test whether Master would be a necessary component of a winning Merfolk list, as it was prominently featured in the lists of the two Grand Prix winners.

On the subject of high-profile tournaments, UG Merfolk got off to a roaring start, posting Top 8 finishes at the first two major Modern tournaments after Ixalan’s release. Here’s the list that made its way to the top tables at October’s Open in Charlotte, spawned a think piece from longtime Merfolk advocate Corbin Hosler, and set many a Merfolk pilot’s mind racing:

While some of Alan's card choices would eventually be dropped from later iterations of the deck, the list's goal is clear: lower the curve, be more aggressive, and run some sideboard tech for tough matchups that mono-blue Merfolk lacks access to. Swapping three and four drops for Branchwalker and Speaker lower the deck's curve enough that running 19 lands (typically a dicey proposition in Merfolk) is feasible, and Natural State is a sneaky-sweet addition to the deck. It zaps Ensnaring Bridge, Cranial Plating, Ghostly Prison, and other problem cards Merfolk has classically had a hard time with. The fact that this high finish was immediately followed by another Top 8 finish at an SCG Open made a strong case for the variant’s viability.

At first glance, the switch from mono-blue to UG seems to have nothing but upside: the gameplan is more streamlined and proactive (important features of Modern decks); the sideboard toolbox got deeper; the early returns were good. So, what’s the catch?

UG Merfolk is a promising variant, but one in need of reinforcements from future sets in order to be considered a legitimate alternative to mono-blue Merfolk. While this view is somewhat controversial, I am far from the only Merfolk pilot to hold it, and consensus has increasingly leaned that way over the past month or so.

The first problem it faces: the manabase is now more complicated and less reliable. One of the big draws to Merfolk has always been that it takes no damage from its lands, which incidentally hates on decks such as Burn. The lack of reliance on nonbasic lands also buffers the deck against the effects of land disruption like Blood Moon and Ghost Quarter/Leonin Arbiter. These buffers are gone in UG, which means the deck must get off to fast starts to avoid falling prey to hosers.

Another problem with the two-colored manabase is that cards like Mutavault become more of a gamble when you’re trying to hit two specific colors of mana. As described by Frank Karsten's seminal article on manabases, you need a certain number of mana sources for a given color in order to see them at a high probability, which is a critical component of getting off to a fast start. Aether Vial helps in this regard, but it does not entirely fix the problem, as we also run noncreature cards, especially in postboard games. Leaning heavily on Vial also forces us to keep it in for midrange matchups, against which siding out Vial was previously optimal and beneficial.

Secondly, Lightning Bolt is far from gone: decks like UR Breach, Titanshift, Jeskai Tempo, and Burn have kept Bolt’s stock high; up-and-comers like BR Discard Aggro and Mardu Reveler also employ it, and even Grixis Shadow occasionally dabbles in Bolt as a way to down Push-proof targets like Mirran Crusader. All these Bolts make for a very welcoming environment for Master of Waves, thus tipping the scales back in favor of the classic version of Merfolk, which also recently received a new toy in Kopala, Warden of Waves.

As an example of a list better-suited to handling the red-heavy field described above, here's a list I've been piloting to good success on Magic Online:

Lastly, UG has proven more susceptible than mono-blue Merfolk to one of the classic weaknesses of Aether Vial decks: running out of gas. Not only does the deck have little use for excess mana outside of Mutavault (which is played in fewer numbers thanks to the new manabase), but it also struggles more than mono-blue when playing from behind. A Master of Waves army-in-a-can is often the perfect tonic to an underwhelming Merfolk board state, and UG has no such haymaker to turn to. Add to that the fact that UG results tailed off pretty quickly after its fast start, and it seems like the variant is close, but not quite there.

But enough burying the lede. How does Merfolk Mistbinder figure into all of this? I believe this two-mana lord provides UG with an important advantage, and that is the ability to streamline even further when compared to the mono-blue version. Having access to eight one-drops and 12 two-drop lords makes it very easy to find the adequate numbers of creatures to threaten a Turn 4 kill, thus making the aggro aspect of Merfolk even more dangerous, and perhaps at last making UG a legitimate alternative to classic Merfolk. Increased efficiency and consistency generally lead to good results in Modern, as we most recently saw with the respective emergences of Shadow decks as the premier rock strategies in the format, and of Storm decks after the release of Baral, Chief of Compliance.

Furthermore, this card makes a build of Merfolk that tops out its mana curve at CMC 2 a possibility. Such a build has positive implications for cards like Aether Vial; never needing to add more than two charge counters means that an open Vial on two represents most creatures in the deck, and players will rarely run the risk of ticking Vial up to awkward numbers. That minor but occasionally bothersome detail can sometimes result in hands that stumble out of the gate, which can spell doom for such a tempo-oriented deck. It can also result in less-than-ideal topdecks, such as when Silvergill Adept (otherwise excellent in topdeck situations) is rendered uncastable due to the lack of Merfolk in hand or lands on the battlefield. Capping at CMC 2 also opens up the possibility of lowering the land count even further than most versions of UG do.

The next logical question to ask: what to replace? The first swap I would test is to bring in Mistbinders at the expense of three-drops such as Merrow Reejerey and Kopala, Warden of Waves. While these cards have served me and other Merfolk pilots well for some time now, I don’t believe their ancillary benefits outweigh more consistent early-game pressure. Alternatively, if the effects of something like Reejerey are deemed too important to part from, support cards such as Merfolk Branchwalker, Phantasmal Image, or Smuggler's Copter can be trimmed or cut to make room for Mistbinder. The loss of Branchwalker in particular will affect the deck’s resilience a bit (since it is a conditional source of card advantage), but increase the deck’s explosiveness, as it will now have up to 16 copies of a +1/+1 effect, 12 of which cost two mana. This is the UG list I intend to start testing once Rivals of Ixalan releases:

To play devil's advocate to myself, it's possible that Mistbinder fails to make a significant impact in UG, due to the fact that improving the deck’s straight-line aggro speed may not cause a major shift in Merfolk’s matchup profile. Decks like Affinity, Elves, and Storm will still be faster, and the deck will still need to disrupt them in order to win. Slower types such as UW Control will still seek to answer Merfolk's threats and slam win conditions they can't beat. The matchups where goldfishing fast kills more consistently are most likely to benefit the deck are medium-speed combo decks like Ad Nauseam or Titanshift, and the creature pseudo-mirror matches in Death & Taxes or Humans. These decks may not represent enough of the metagame to tangibly reward UG pilots for their deck choice. 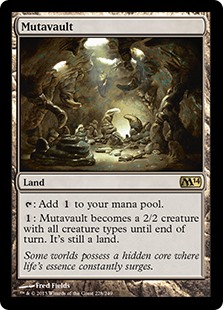 It’s also worth noting that Mistbinder provides no means to evade blockers, which can occasionally stymie the deck’s ability to pressure the opponent’s life total. Increased reliance on green mana can make the inclusion of cards like Mutavault more difficult (especially if it’s accompanied by a lower land count), and curving out at two makes the deck more susceptible to hosers such as Engineered Explosives and Ratchet Bomb. Lastly, Mistbinder may simply provide too marginal a boost for UG to outright overtake mono-blue in the Merfolk power rankings.

Despite these concerns, I believe that Mistbinder has the potential to be a net upgrade for UG Merfolk, and bolster it to the point where it’s both a serious Merfolk variant and a player in the Modern metagame. But only testing will tell! If anyone has some thoughts to share on these or other Merfolk spoilers for Rivals of Ixalan (none of which seem particularly attractive to me so far), drop a line in the comments.

2 thoughts on “Walking on Water: Merfolk After Rivals”