This week we are going to study the most recent Grand Prix in Phoenix and its impact on the online metagame. GP Phoenix was taken down by 5-Colors Humans, piloted by Steve Locke. First, let's start with some statistics of cards played at the GP.

Before GP Phoenix, the top four decks on Magic Online were (from most to less popular) Mono-Green Tron, Humans, Jund, and Burn. Jund seemed like it would be the most popular deck at the Grand Prix, but as it turned out there were only two copies of Jund in Top 32. Let's have a look at the decks played in Top 8 and Top 32.

Decks appearing at least twice in the Top 32:

From here, we can tell that the Modern format is still pretty diverse even after the unbanning of Bloodbraid Elf and Jace, the Mind Sculptor, as there's no single deck that can dominate the entire metagame. Humans has been good since the Pro Tour and remains strong after the unbanning of two powerful cards. Jund seems like a very good deck from MTGO results but it seems like paper events didn't go the same way. From the Grand Prix results, I can see that blue decks and Affinity are doing quite well.

Both UW Control and Bring to Light decks play Supreme Verdict, one of the best sweepers in Modern. The uncounterability on Verdict is good against Grixis Death's Shadow and other creature decks that play counterspells. This card has increased in price by at least 1 ticket and still has no sign of slowing down.

Seeing UW Control reminds me of the UW Midrange/Control deck played by Yuuya Watanabe at Worlds 2015. This deck is the perfect deck to bring back to Modern at this moment to combat Jund and Humans. 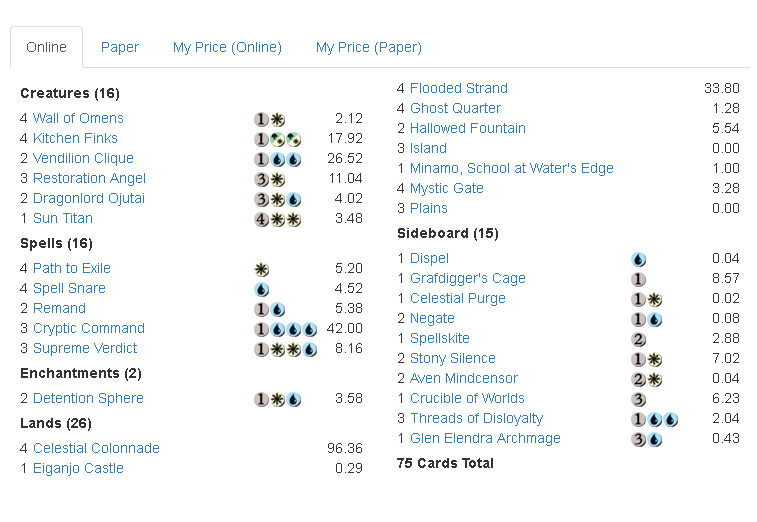 After the unbanning, Jace could also fit into this deck as it has a bunch of creatures that can curve into Jace and protect it. After Jace, the five-drop Dragonlord Ojutai is also pretty strong right now because Jund doesn't have much card that can deal with it except Terminate. Even if they have good removal against Ojutai, this blue-white deck will have cards to counter those spells.

These creatures are rarely played in Modern nowadays but I do feel they have some potential. Kitchen Finks can be played in many green decks, be it creature combo like Counters Company or midrange like Jund, so it's surprising to see its price at only 4.5 tickets. This is a good short-term spec, as I think the price has a high chance of increasing in the next couple weeks.

Another card in the UW decks I recommend buying is Restoration Angel. This is one of the best cards in the deck, although now it has to fight for a spot with Jace at the four-mana slot. Restoration Angel acts like a counterspell by flickering a creature the opponent is trying to kill, which can also generate card advantage when the creatures being flickered are either Kitchen Finks or Wall of Omens.

Moving forward, I suggest keeping an eye on the creature cards in Yuuya's deck. There's a good chance that players will bring this deck back to the online metagame, as it can easily out-value the midrange decks available.

Elves used to be a dominant deck in Modern and I'm not sure why it disappeared. I still think this deck is pretty explosive. The good news is that someone made it to Top 32 of the Grand Prix using Elves, with the addition of Bloodbraid Elf. Let's have a look at the list: 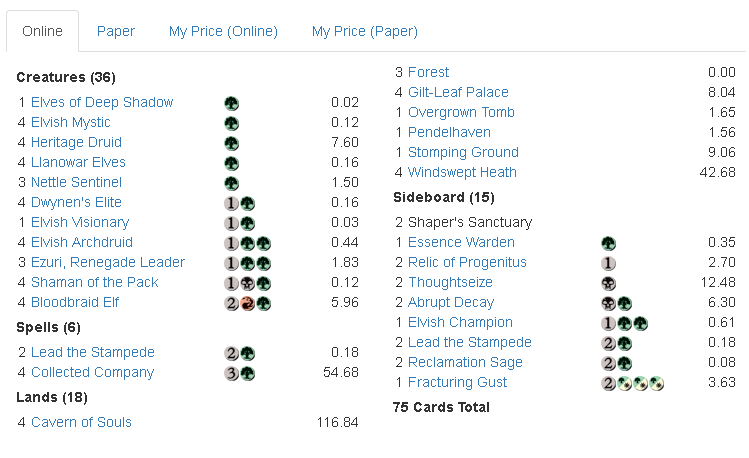 The cards I'm most interested in here are mostly unique to the Elves deck.

Nettle Sentinel and Pendelhaven got reprinted in Masters 25, which isn't good news. This probably means Nettle Sentinel will struggle to break the 2-ticket mark anytime soon.

As for Pendelhaven, there's still a chance if Infect makes a comeback. I think the Masters 25 version of Pendelhaven is low enough to buy some copies for investment. Bloodbraid Elf increases the explosiveness of this deck, and that may be enough to bring back its popularity.

Gilt-Leaf Palace is only played in the BG version of Elves. I'm guessing many of you didn't notice the price increase until seeing the Elves deck in the Top 32 of GP Phoenix. I'm surprised too, but it's probably too late to get some copies.

Heritage Druid was reprinted in Iconic Masters last year, and the price was affected. Now that Elves is seeing the light again in Modern, I think this will be the golden opportunity to invest in some Elf cards like this. Although Heritage Druid is just an uncommon, it's an important piece in the deck, as the three mana it generates can easily let the pilot combo off by spitting out their entire hand. I strongly recommend buying playsets of Druid just in case.

Last but not least, Collected Company. I have a feeling that this card is low in price because there weren't many Company decks running around recently. That is probably because players online have focused on Bloodbraid and Jace, and the unban hype has overshadowed Company decks. At its current price, I think it's worth investing in playsets—the card can easily go up to 20 tickets when the appropriate decks become good again.

One thought on “Insider: GP Phoenix’s Impact on the MTGO Metagame”