Below are the total set prices for all redeemable sets on MTGO. All prices are current as of April 3, 2018. The TCGplayer low and TCGplayer mid prices are the sum of each set's individual card prices on TCGplayer, either the low or mid price respectively.

Ixalan (XLN) and Rivals of Ixalan (RIX) continue to be good value as they sit in the low 60 tix price range. With about two weeks left to go to draft this format, I am getting comfortable predicting a target price range that these two sets will reach. Below is a chart of the last five large sets and the price path they took before and after they were the main draft set. XLN is tracking the price path of Amonkhet (AKH) and I think it will continue to follow this path, ultimately reaching the 70 to 80 tix range by the middle of May or four weeks after drafting ends. 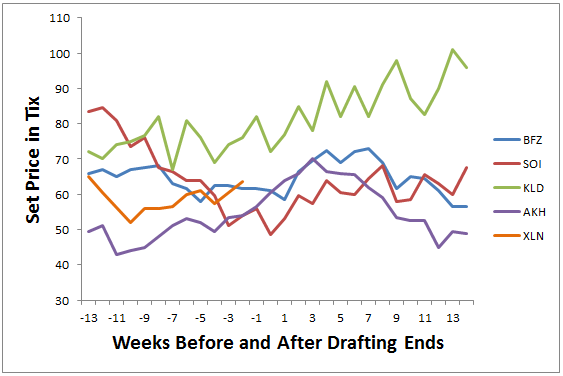 Next up is a similar chart but for the corresponding small sets from the two set block era. We are clearly in the flat price range that most of these sets experience in the final few weeks of heavy drafting before the release of the next draft format. I think for RIX that a price peak similar to Hour of Devastation (HOU) is most likely, hitting the 70 to 90 tix range by the middle of May. 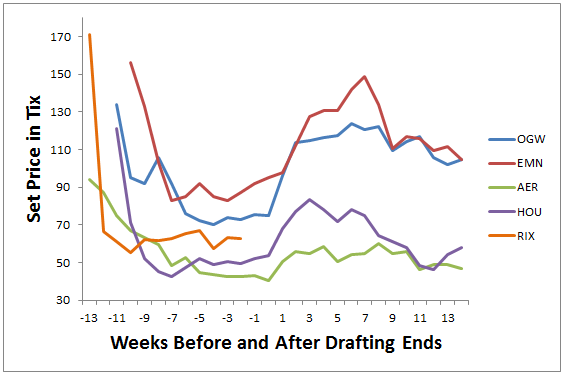 I've been a heavy buyer of both of these sets in the past few weeks and I plan to continue buying both sets. With a low-end price target for both sets of 70 tix, as well as accounting for a ten percent spread between buy and sell prices, the safe buying threshold is 63 tix. This means current prices present a low chance for a loss and an excellent chance of being profitable.

On the singles front, Heart of Kiran from Aether Revolt (AER) is bumping up from 4 tix to over 5 tix this week. It's not clear to me if there is a catalyst for this move, but this card is one of the most powerful cards in Standard currently without a home in a top deck. The release of Dominaria (DOM) in a few weeks shake up the format and players might be thinking of brewing with this card.

Speaking of DOM, we haven't yet heard how it will be released on MTGO. For RIX, there were preview events just prior to the paper pre-releases. That set up a period of huge demand for the new cards with little supply to satisfy that demand and prices spiked over that weekend before coming back down to earth by Monday. A similar situation could unfold soon and it will be worth watching.

Announced this week is that Brawl is coming to MTGO on April 18. If you haven't heard, this is a new Commander format that uses only cards in Standard and sixty-card decks. This is going to be a popular format on MTGO, unlike the 1 v 1 Commander format which failed due to the density of powerful blue cards and tutors. That density led to a stale format dominated by base blue decks. Brawl will not face the same issues since it is Standard only. 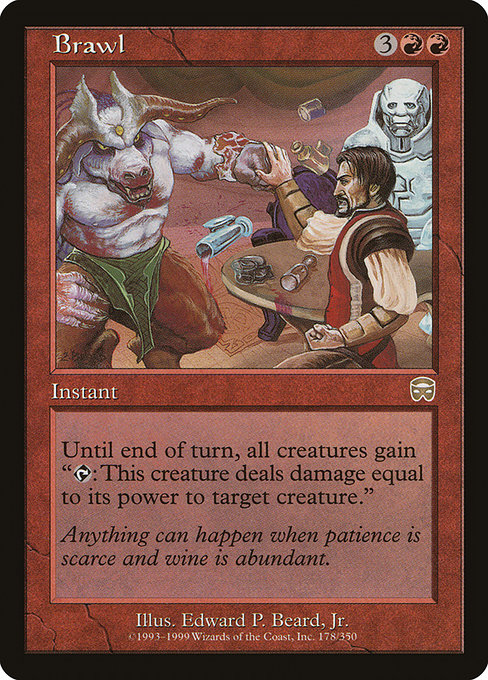 On top of that, Block constructed used to be quite popular online and this new format will have a chance to fill that role of a format where brewers and players get to build and play lower power decks for prizes. The addition of new sets and Fall rotation will mean the format gets refreshed regularly, generating a new puzzle to delve into and solve.

In terms of actionable advice, I don't think there is anything to do at the moment. The singleton restriction will mean even a dominant Brawl deck won't have a big impact on demand for singles, at least initially. If the format takes off in popularity then fringe Standard cards will get a second life and could see a lift

After peaking at 116 tix at the end of February, Eldritch Moon (EMN) is down over twenty percent and sits at 89 tix. This type of drop is worth investigating for a potential rebound, especially while the set is still available for redemption. With only three weeks left before redemption goes offline, EMN is cheap but risky. I expect a rebound in the price as we approach the redemption cutoff date of April 25, but I don't think speculating on full sets over such a short time frame is a good idea. There's no guarantee that there's a wave of demand from redeemers still to come. Nevertheless, a further decline into the 70 to 80 tix range would be very enticing for them. If a price drop like this occurs in the next two weeks I would buy a few sets with an eye to reselling just before the end of redemption.

Elsewhere on the redemption front, Shadows Over Innistrad (SOI) has not seen a similar drop and remains in the mid 30 tix range. If you have held onto your SOI sets this long, there should be another price peak over the next couple of weeks. Unlike EMN, I would not be looking at SOI from a speculative standpoint though.

The end of Masters 25 (A25) drafting means we are seeing a recovery in some of the cards reprinted in this set. Blood Moon has gone back over 20 tix, while Ensnaring Bridge looks like it will try to break the 25 tix level in the next couple of weeks. One of the biggest gainers percentage wise is sideboard staple Rest in Peace, more than doubling from its initial low of 2 tix to now sit close to 5 tix.

Speaking of A25, look for boosters to drop in price over the next little while. At some point, these will become oversold since they will no longer be usable for Draft. Basically, these will be good targets when nobody else wants them. They've already dropped below 5 tix and I would be looking to buy somewhere below 4 tix.

For a complete look at my recent trades, please check out the portfolio. This week I've been paring down a couple of Modern positions in Domri Rade and Collected Company. Both have reached profitable levels but are having trouble jumping to outsized gains. I'm still in defensive mode for speculating on Modern as we approach the release of DOM so my overall bias is to be a seller. I want to have some tix on hand to be able to scoop up good deals so it's perfectly reasonable to be trimming the portfolio at this time.