Today, I will be shifting gears and diving into another area of Magic. We have a new format in our midst, one that is both casual and competitive levels of friendly: Brawl!

Brawl is a format similar to Commander, except with only Standard-legal cards. A 60-card deck is formed, 59 cards in the library plus the legendary creature or planeswalker, which is a change from traditional Commander. Players start at 30 life, as opposed to 40 life in Commander, and only singletons of any non-basic land are permitted in the deck.

Similar to Commander, this format allows a player who enjoys a specific legendary creature or planeswalker that they were lucky enough to obtain to build a deck around their card. It is an incredibly casual-friendly format, as oftentimes new players will open packs or other products and have their “best card,” which they want the opportunity to play with.

How is the future looking for the Brawl format? Let’s dive right in!

The initial financial changes that could occur from Brawl increasing in popularity center around the cheaper legendary creatures and planeswalkers, particularly in the $0.50-$5 range.

Cards will often get printed with inherent power and a place in the occasional sideboard or rogue deck, but their prices will not increase due to their overall lack of play throughout formats. An example of this in the past is Ruric Thar, the Unbowed, which has never been above a dollar despite being a nearly-unanswerable card for combo decks in eternal formats and having seen fringe play in Legacy sideboards. Of course, Ruric Thar, the Unbowed is no longer Standard-legal and will never get to see Brawl, but it would have been quite a popular general in the Brawl format.

We have a number of cards with the possibility of play that could see increases from their low (or even bulk) rates as the format progresses. Depala, Pilot Exemplar is less than a quarter apiece; Samut, Voice of Dissent is a mythic rare with great value and several positive keywords that is under a dollar apiece; and Saheeli Rai was part of a banned Standard combo that also sees Modern play, and is under four dollars apiece. All of these cards could see potential increases and have powerful possibilities in the Brawl format.

Demand from players building Brawl decks could cause pricier uncommons to appreciate as well. Standard staples like Abrade or Field of Ruin could easily cost far more than the general of their own decks. Field of Ruin and Unclaimed Territory are seeing ample Modern play as well, so any reason for these cards to have more demand potentially causes an increase in price.

Commander has already shown that a commander that only sees play in the casual-centric format can still maintain a higher price tag. Brawl creates the same potential, and mythic rares are always larger targets. The aforementioned Samut, Voice of Dissent, as well as Admiral Beckett Brass, are strong cards with unrealized potential that maintain small price tags.

Lately, we have seen a stronger influx of legendary creatures between Rivals of Ixalan and Dominaria. As mythic rares go, Multani, Yavimaya's Avatar is the cheapest mythic rare in Dominaria as of prerelease weekend, but easily has a home in Brawl as it has deck construction implications similar to any Commander deck. Since Brawl is new and fresh, it could cause an increase in the cheaper mythic rares upon release alongside any amount of Standard play, should play be seen.

Other rares are generally cheaper upon release day due to being overshadowed by cards in older Standard sets (in this case, Kaladesh and Aether Revolt). Aryel, Knight of Windgrace seems excellent in Brawl with the ability to generate several tokens and force multiple removal spells out of the opponent’s hand because of its own ability to remove creatures every turn. But in Standard, the WB Tokens decks are already quite well established and do not currently need a four-drop creature with an additional turn of setup. Over time, this is an example of a card to look at between both Brawl and Standard.

Similar to Commander, it is difficult to create a consistent deck within a singleton format. However, there are routes to take when constructing these decks, and the best place to start is with the commander.

I’m going to look at a deck concept that was introduced to me by one of Quiet Speculation’s owners, Kelly Reid. The deck, built around Kambal, Consul of Allocation, has been christened by Kelly with the awesome name of Kambrawl. 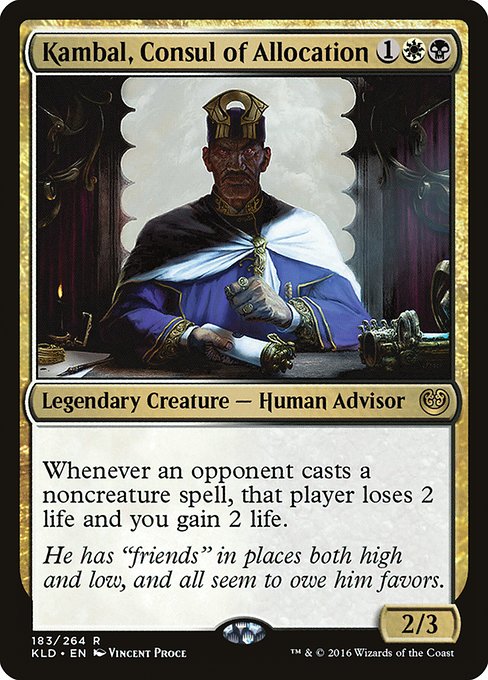 When discussing the construction of a Brawl or Commander deck, every deck will be unique because of the options granted by any given format. The knowledge that stays the same is the overall math on any mana curve. This will usually fall between 18-21 lands for an aggressive deck, or up to 26-27 lands maximum for a hard control deck, and the vast majority of decks fall somewhere in between, like a bell curve. For Kambal, Consul of Allocation as a three-drop, this deck will likely fall in the 23-25 land range.

Kambal, Consul of Allocation gives this deck a white-black base. It helps put pressure on any opponents not playing creature-based decks, but the other 59 cards can meld very well together.

There are two powerful possibilities for white-black in current Standard: WB Tokens, and WB Control. Given the context of the general, WB Control makes more sense, as it punishes any opposing planeswalker commanders and can produce multiple removal spells for any creature commanders.

The list of must-include cards for removal options would be these:

While there are several possibilities still within Standard today, these are the cards that are strong and efficient enough to see play consistently. Brawl is a format where you have to find additional options beyond the first few spells, but this is a good beginning point.

One thing to keep in mind is that Brawl games will often go a little bit longer than the average Standard game, but currently have fewer combo options than Commander games, so it is important to look at every available card in the Standard pool when making a Brawl deck. Cards that would usually be sideboard cards such as Authority of the Consuls, Lost Legacy, and Fragmentize would likely make their way into the 60-card main deck for some additional versatility.

Beyond the general, there needs to be additional possible ways to win the game that the opponent cannot consistently prepare for. WB Control has some unique options beyond some of the more obvious auto-includes in the deck, such as Liliana, Death's Majesty and Elenda, the Dusk Rose. Cards that are overlooked like Gideon, Martial Paragon can combo well with Gideon of the Trials as a sub-theme, and other strong Vampires like Legion Lieutenant go well with Elenda, the Dusk Rose.

One of the most overlooked things to do in these casual formats is to have some options that are low to the ground. Cards like Legion's Landing // Adanto, the First Fort are inherently strong and are often included in these scenarios, but other cards that appear weaker such as Night Market Lookout can chunk large amounts of damage while the opponent is getting their feet on the ground. Even a control deck can apply tempo pressure in a singleton format.

For this particular deck, one of the nicest pieces is the life gain that comes as part of Kambal’s ability. Being able to place cards such as Arguel's Blood Fast // Temple of Aclazotz and Orazca Relic can create a strong late-game influx of card draw that opponents will have difficulty playing around or suppressing. 30 life is a lot to begin with. Without insane combinations of early-game cards, the life gain can be too much to overcome over time, especially with an efficiently-costed general like Kambal.

Lastly, if you want to add some inexpensive cards to a list like this in lieu of some of the more expensive planeswalkers or removal spells, there are plenty of options since we are in a seven-set Standard. Deadeye Harpooner kills creatures situationally; Saving Grace can make your commander much more difficult to deal with; Grind // Dust works in the Brawl setting given the additional time; and even Cruel Finality can help get the deck to late game when options are limited.

Here is a sample decklist for a Kambal, Consul of Allocation deck:

Get Ready to Brawl

These are only a few possibilities out of hundreds, and with Dominaria just now joining the fray, this example is only one possibility out of dozens of archetypes. Brawl is in its infancy, and has a lot of potential across the board, so keep an eye on it.

Do you have a Brawl deck idea that you would like me to write about next week? Let me know in the comments!