All MTGO set prices this week are taken from GoatBot's website, and all weekly changes are now calculated relative to GoatBot's "full set" prices from the previous week. All monthly changes are also relative to the previous month's prices, taken from GoatBot's website at that time. Occasionally, full set prices are not available, and so estimated set prices are used instead. Although Hour of Devastation (HOU), Amonkhet (AKH), Aether Revolt (AER), and Kaladesh (KLD) are no longer available for redemption, their prices will continue to be tracked while they are in Standard. Core Set 2019 (M19) prices start this week, though TCG prices are not yet available.

Prices rebounded strongly this week for all sets except the currently being drafted Core Set 2019 (M19). Have a look below at a chart of weekly prices for all recent large sets after their release. Compared to the last six large sets, M19 has started at the lowest price and is on a similar price path as Amonkhet (AKH). If M19 continues to closely track AKH, then a price bottom in five to eight weeks at a little under 50 tix is expected. 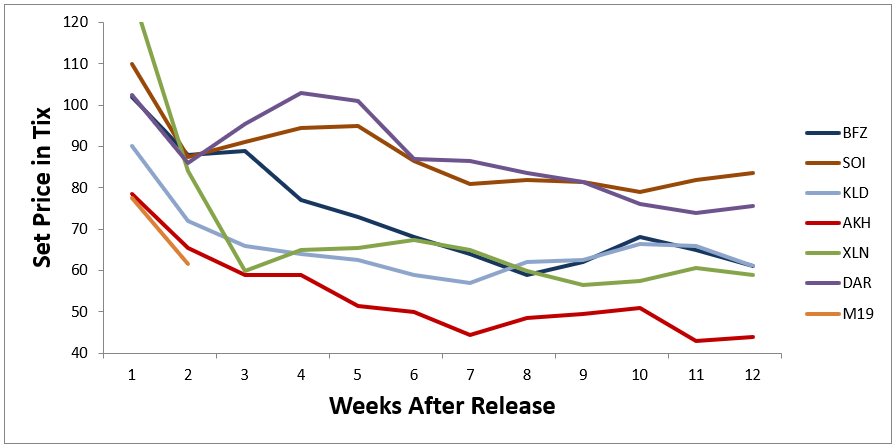 Although both of these sets are large, summer sets, there are some differences. First of all, AKH is a set from the two set block era, while M19 is the first core set in years. The reprints such as Scapeshift, Crucible of Worlds and Death Baron constrain the starting price of this set as there is already a ready supply of these cards online.

The next major difference is the lack of Masterpieces in M19. Their presence in AKH meant that some of the value in paper boosters came from the Invocations. But for MTGO, they did not add any value to boosters as they were generated in Treasure Chests. Furthermore, if a paper set is cheaper as a result of boosters inserts, then all things being equal, the digital version will end up with a lower price through the redemption channel. With no Masterpieces weighing on the price of M19 a price path that diverges from AKH is a strong possibility. It will be useful to keep an eye on how M19 evolves over the coming weeks to see if a divergence occurs.

The other interesting aspect of the large set price chart above is the price path of Dominaria (DAR). It closely tracked the path of Shadows Over Innistrad (SOI) with a slightly more expensive bias for most of its drafting window before dipping below it in the last three weeks.

If it continues to roughly track SOI, then profits on the full set strategy will be minimal. Standard rotation in the fall has a very long reach and major price movements on existing Standard sets happen only after rotation. Thus it will be prudent to consider the benefits and risks of holding onto sets of DAR past their redemption guarantee date in early September. Fortunately, the cutoff date extends into October. Unfortunately, DAR is the first set printed after the end of the two set block era so there are no examples of how sets like DAR have fared vis-à-vis the available supply of redemption sets.

Speaking of redeemable sets, the promised print run of Ixalan (XLN) and Rivals of Ixalan (RIX) has yet to make it into the MTGO store. DAR remains the only set currently available for redemption.

Spirit decks are seeing a boost in Modern with the addition of the efficient Supreme Phantom from M19. Here is an example of a new Spirit deck that fared well in the Modern Challenge on MTGO this past weekend, going 7-0. The market is reacting by bidding up the price of key components like Spell Queller and Aether Vial.

Note that Aether Vial is a staple in multiple archetypes while Spell Queller has shown up in Jeskai control decks from time to time, so both of these cards get an extra boost from already being represented in the Modern metagame, unlike a card like Rattlechains.

The rest of the decks from the Modern Challenge represent a diverse and stable metagame. Without major shifts in the metagame, prices will remain fairly stable except for flavor-of-the-week decks that trigger a bunch of buying interest like Spirits has done. The next best buying opportunity in Modern will come with fall rotation in October as players refocus on Standard and sell their Modern decks in order to fund their draft of the new set. If you are holding Modern specs over the coming weeks, be sure to unwind your positions by early September in order to get liquid in advance of October. I definitely want to have some tix on hand to deploy into depressed Modern staples at that time.

DAR boosters have crested over 2 tix for the first time since the release of M19. This is a good sign that DAR boosters will continue to trend higher over the next six weeks. Helping to confirm this is the regular number of Swiss drafts that are firing on MTGO. Checking in an at any given time reveals two to four drafts in progress. This steady demand will only increase as players tire of M19 draft and also look for better value from cheaper DAR drafts.

XLN and RIX boosters haven't dropped to a good buying level and remain over 1 tix. At this point, it's doubtful that a strong buying opportunity will emerge on these. It's possible that fall rotation will trigger a substantial increase in XLN and RIX cards, which in turn would filter down to the price of boosters. If you are not willing to bet on singles when rotation comes, then using boosters will be a good, diversified substitute if prices remain in the 1.0 to 1.3 tix range.

For a complete look at my recent trades, please check out the portfolio. This week I have been continuing to buy DAR draft sets. At this point, I have over one hundred draft sets all purchased at a price under 6 tix, or below 2 tix per booster. There is still an opportunity in these as the market will grind higher over the coming weeks, but the best buying window has passed.

The next macro opportunity will be in full sets of M19, M19 boosters and Guilds of Ravnica foil mythic rares. The buying window for these will be at the end of September and into early October. With this in mind, the plan is to exit on the existing macro trades by the middle of September. This will mean selling DAR boosters, DAR full sets and the M19 foil mythic rares that I have purchased over the past two weeks.

The beauty of this process is being able to roll profits into the next trade in a seamless way, allowing for compounding of tix over time. It also helps that each of the strategies has strong economic fundamentals and a history of success. The challenge of this type of trading is the patience required and the low returns relative to catching a hot Modern or Standard single on the rise. Knowing the style of trading that works for you is important in deciding on how to deploy your tix, but having some portion of your portfolio in these macro strategies will allow you to ride out the ups and downs of singles prices.