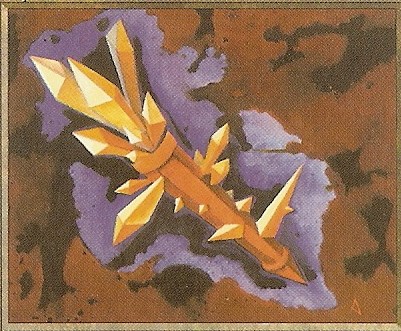 It would appear we entering the summer doldrums of MTG finance. There are fewer crazy moves on MTG Stocks lately as the buyout craze settles a bit. Things aren’t all bad though, and prices have remained fairly robust despite the annual cool-off in buying that usually takes place around this time. All in all, I think the market will remain relatively strong compared to summers in the past.

But I don’t think the rampant buyouts have disappeared altogether. In fact, I have some data to suggest they’re still going strong, but in a subtle way that may be escaping some people’s radar.

For example, if I filter MTG Stocks to show the Interests for today (Sunday) that moved by at least 4% and $1, I get a fairly short list of some uninspiring movement. But when I login to my MTG Stocks account and I activate some additional sets, I see a completely different picture.

This is very reminiscent of the Reserved List buyouts we saw over the past few months. Huge chunks of some of Magic’s oldest sets were spiking in lockstep.

But is this movement real? What are the implications? Are there other trends underneath the surface? This week I will investigate the latest round of buyouts that nobody’s talking about.

There’s a good reason MTG Stocks doesn’t show movement in CE and IE cards by default. Their volume is so low and their stock so unreliable that it can create some artificial price movement. I guarantee most of the increases above don’t reflect a true increase in demand.

That said, these are extremely hot right now among certain communities. And while I highly doubt a CE Regeneration is now a $55 card, some of the more playable Collectors’ Edition cards have increased significantly. For example, check out the Market Price curve for CE Fastbond. 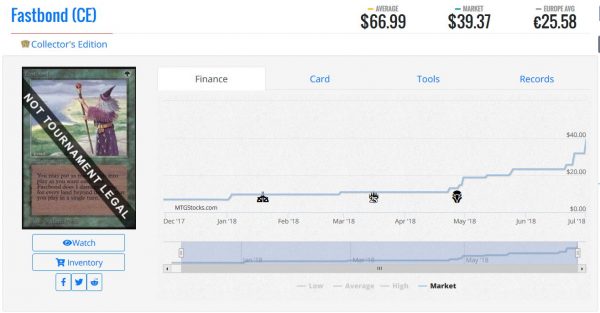 The data only goes back to December of 2017, but you don’t need more than that to see the movement from $7 to $40. You can see that sometime in May there was a surge in demand as more expensive copies continued selling on TCGplayer.

Beyond just TCGplayer, there’s evidence of strong CE demand at major online retailers. I swear just six months ago you could buy a CE Mox for around $100-$150. Now they are three to four times more expensive, and buylists on Moxes range from $300-$560. Black Lotus buylist is $1400 at Card Kingdom! Some CE dual lands even buylist to Card Kingdom for more than Revised!

Then there’s the little stuff. The Collectors’ Edition cards that used to have no demand at under a buck are suddenly worth a decent amount of money. For example, check out this order I placed back in December 2015. If I still owned these cards, it would be a major humble-brag. But alas, all of these are gone and I didn’t get anywhere near what their market value is today.

Of course, my actual profit was probably around 1/100 of that, but the fact of the matter is that CE stuff has exploded lately. Prices are much higher, matched by a stronger demand profile. MTG Stocks may not get the numbers exactly right, but I urge you to pay closer attention to these explosive, highly desirable cards. Even if they’re only fancy proxies.

When I run a search on market price movement with MTG Stocks and include a wider basket of sets, I see two Alpha cards take the top spots on the list. Crystal Rod's market price went from $5.88 to $39.99 over the weekend. This means a copy had sold for under $6 and then the next copy sold for $40. What’s up with that?

Next on the list is Throne of Bone from Alpha, which went from $12.95 to $50. Another crazy move for a virtually unplayable card, even in Old School. Why is Alpha selling at significantly higher prices all of a sudden?

The answer is simple: retailers have finally caught up with the crazy move in prices that I’ve been talking about for the past six months. And while it’s awesome to see some of the chase Alpha cards finally get the pricing they deserve, what baffles me most is the aggressive buy prices vendors have on the bulkiest of the bulk. Browsing ABUGames for their lowest Alpha buy price, I see that outside of HP basic lands, the lowest number they have listed is $7.25. That’s what they’re offering, in cash, for HP Fear and Firebreathing. From there it increases.

And ABUGames’ definition of “HP” is fairly liberal. Take a look at this HP Beta Mox Sapphire they have in stock. 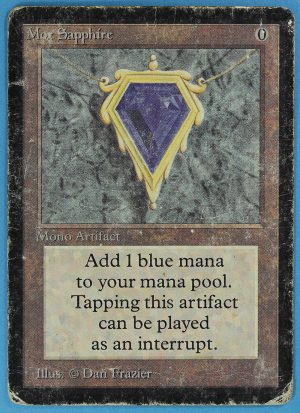 If this is acceptable at HP, then I’m fairly confident nearly every HP card you purchase from TCGplayer labeled as such would be acceptable. Probably some Damaged copies would also meet the criteria.

When you look towards nicer-condition Alpha cards, the buylist floor is even crazier. Fear is one of the two cards that ABUGames pays least on. But their Near Mint buy price is still $18.25 cash. Buy prices on uncommons are even more aggressive. For example, remember that Crystal Rod spike? Well ABUGames pays $43.20 for Near Mint copies. So whoever bought that $39.99 copy actually did fine because they can flip for a quick $3.21 profit!

Card Kingdom has also increased their pricing on Alpha lately, though they are lagging behind. It used to be they had plenty of low-end Alpha commons on their buylist for as low as a few bucks. Now the cheapest buy price on their list is $10 for a Circle of Protection: Blue and a Samite Healer. Their lowest buy price on an uncommon is $21. So clearly they are nowhere near as aggressive as ABUGames, but they are starting to give Magic’s first set some respect.

Despite a potential cool-down in MTG finance this summer, I see little reason why Alpha cards can drop in price with such aggressive vendor action. Maybe if someone buylisted a ton of Alpha cards to ABUGames all at once they’d adjust some pricing. But with so few copies out there, that seems unlikely to happen.

Ratios Out of Whack?

So now we have some bizarre scenarios afoot. Collectors’ Edition cards are buylisting for more than Revised counterparts—even with dual lands. Alpha cards are blowing up in price, yet Alpha Power hasn’t really moved as much. We’re starting to see Revised cards spike, such as Royal Assassin and Contract from Below. And where does that leave Beta and Unlimited?

It seems like ratios we used to rely upon between Revised, Unlimited, Beta, and Alpha prices are somewhat out of whack. These should all be moving in step, but because the market was jolted so suddenly, I think there may be some room for moving in and out of certain cards based on their relative movement.

To me, these mismatches in ratios have some opportunity weaved within. Because there are so many cards to look at, it’s hard to pinpoint the single best targets. I would encourage you to investigate further if this is an area that interests you. As a general rule of thumb, I suspect the recent surge in Alpha and Collectors’ Edition pricing means Beta and Unlimited aren’t getting the love they deserve.

With just a quick glance at MTG Stocks, you may conclude the market has cooled off a little bit. But if you look one layer deeper on MTG Stocks, you’ll find there is still a very hot market out there in the form of A/B/U and CE/IE cards. While some of the numbers aren’t exactly real, the trend is very significant.

I know my eBay sales have fallen off a cliff, but this is a misleading data point. Rather than try to ship some extra Alpha and Unlimited cards on eBay, I’ve just been shipping them to ABUGames’s buylist. Their buy prices are so aggressive that it’s worth the instantaneous sale even if I am sacrificing a tiny bit of value.

There’s also a new wave of arbitrage opportunities thanks to the newfound respect Magic’s oldest core sets are now getting from vendors. This is resulting in some major market price movement on TCGplayer—these are actual sales that are happening because of the sudden gap between TCG low pricing and vendor buylists.

And with this sudden shock to the market, I believe ratios have become a little out of whack. I can’t pinpoint a single strategy, but I suspect Beta and Unlimited cards are undervalued relative to Alpha and Collectors’ Edition, respectively. Because I have a personal preference for Alpha I probably won’t make any moves based on this observation. But if you’ve been waiting for a good time to downgrade (or upgrade, depending on your point of view) from Alpha to Beta, now may be the best time to do so. The gap between the two seems fairly large right now, and it should be closing over time.

When the gap does close, I can almost guarantee it won’t be Alpha cards getting cheaper. I’m fairly certain the Beta cards will have to rise to catch up. But time will tell.