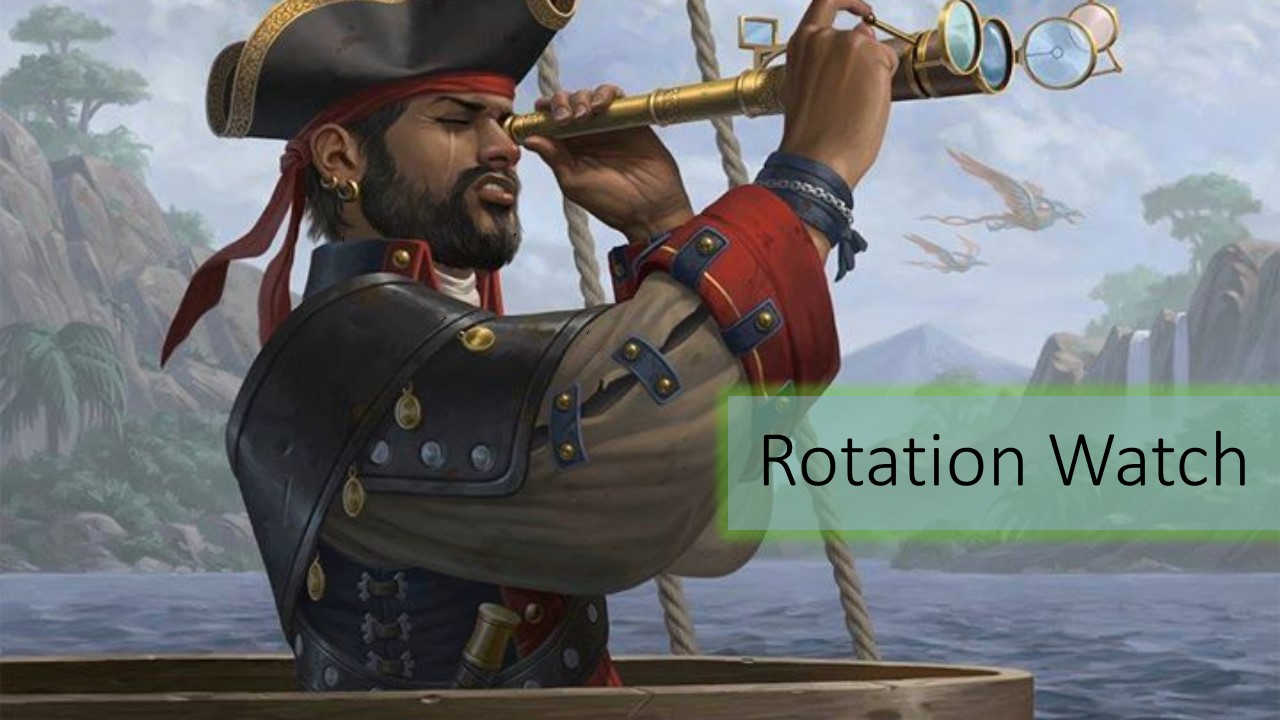 Welcome back, folks. I hope y’all enjoyed my Core 19 Financial Power Rankings series, and I’m eager to hear in the comments and on the QS Discord what recent investment choices you have decided to make.

Speaking of the QS Discord, I can tell there is interest surrounding Standard’s most expensive cards. What is going to happen to Karn? Nicol Bolas is low, should I invest in it? How high will Teferi and Rekindling Phoenix go? Will Carnage Tyrant make a comeback? Read below for my answers to these and other questions surrounding Standard’s most valuable cards. It’s exciting that we now have access to the full spoiler for Guilds of Ravnica to better inform our discussion. 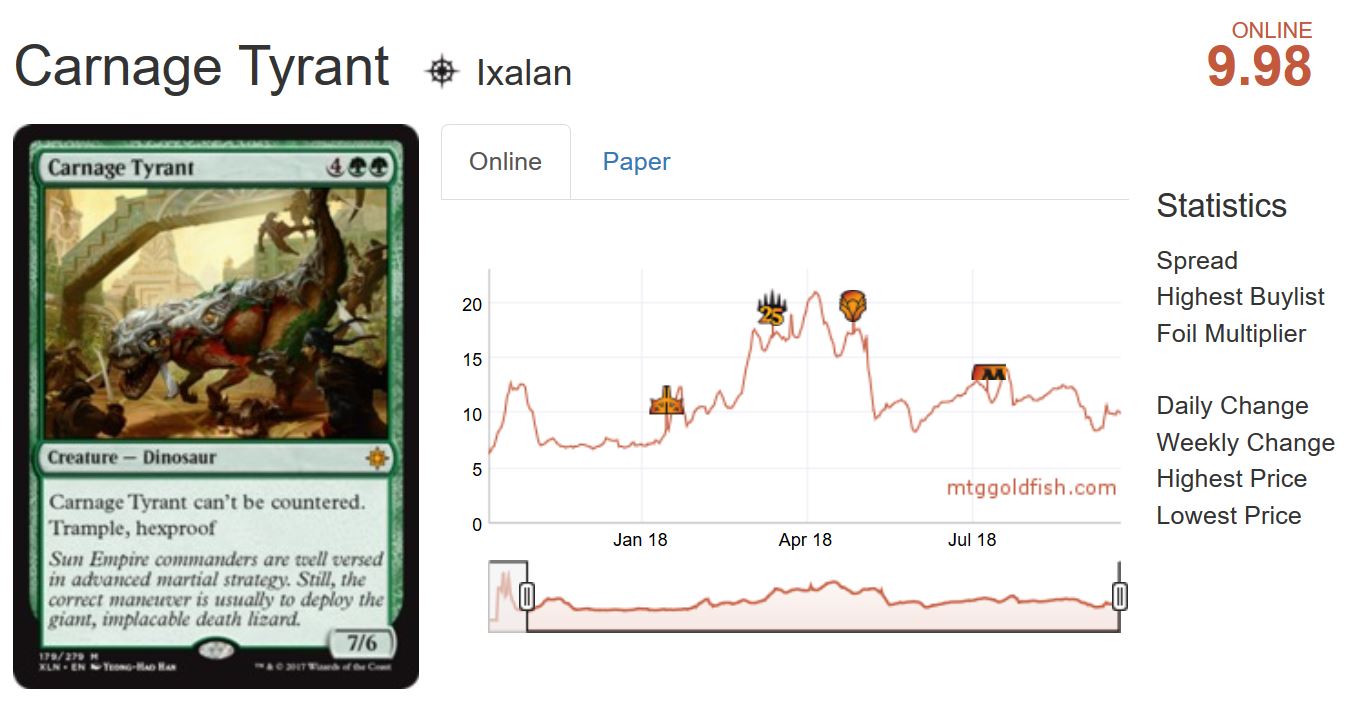 Green decks have the tools to compete at the top levels of Standard after rotation. With the addition of Nullhide Ferox and Assassin’s Trophy to the Standard card pool, Mono Green and Golgari decks look poised to improve their metagame share going forward, and Carnage Tyrant should be a direct beneficiary. Vraska, Relic Seeker has already doubled in price, and I’m surprised Carnage Tyrant hasn’t already seen more movement.

Financial Outlook: Buy Now. A high of 20 tix is likely, with the possibility to reach 25 tix. Teferi-anchored UW Control decks would have to become virtually irrelevant for Carnage Tyrant to dip in price, and that strikes me as highly unlikely. Carnage Tyrant’s price is low enough right now to invest in; if you plan to run green in Standard, I think you should pick up your playset now. 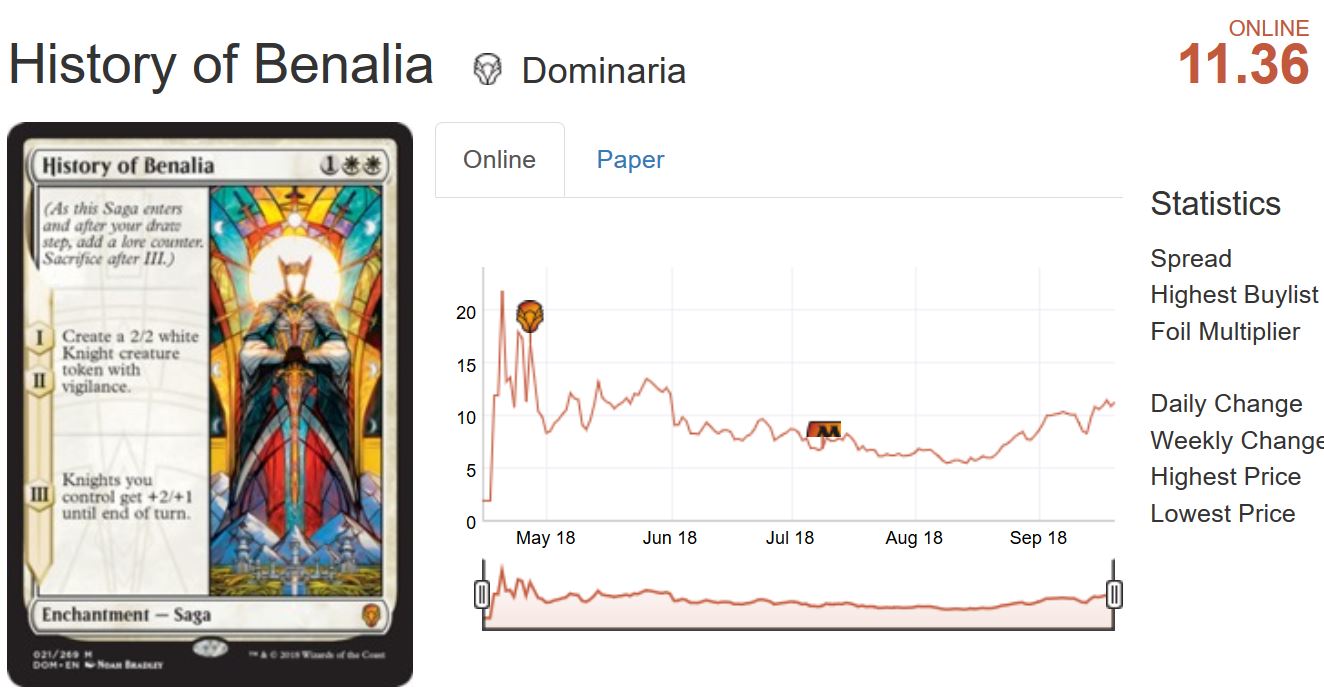 History of Benalia looks poised to see heavy Standard play after rotation. I have tried and tried to build a good Goblin Chainwhirler deck, but every single one looks weak (I’m currently working on a controlling Jeskai variant that looks promising). White rares and mythics will be the direct financial beneficiaries of Goblin Chainwhirler’s diminished play, and I predict that the baseline aggressive decks of the format will be white, not red. Legion’s Landing and History of Benalia have already doubled in price over the past month, and I expect that trend to continue.

Financial Outlook: Buy Now. I’m not exaggerating when I say that History of Benalia could become a 40-tix card. It is a near auto-include in most white aggro and midrange strategies and sees widespread inclusion in Teferi decks’ sideboards. Its high will likely land between 17 tix and 25 tix. If you want to play with them, buy now. If you want to invest in them, don’t beat yourself up over missing out when it was 5 tix and invest now. 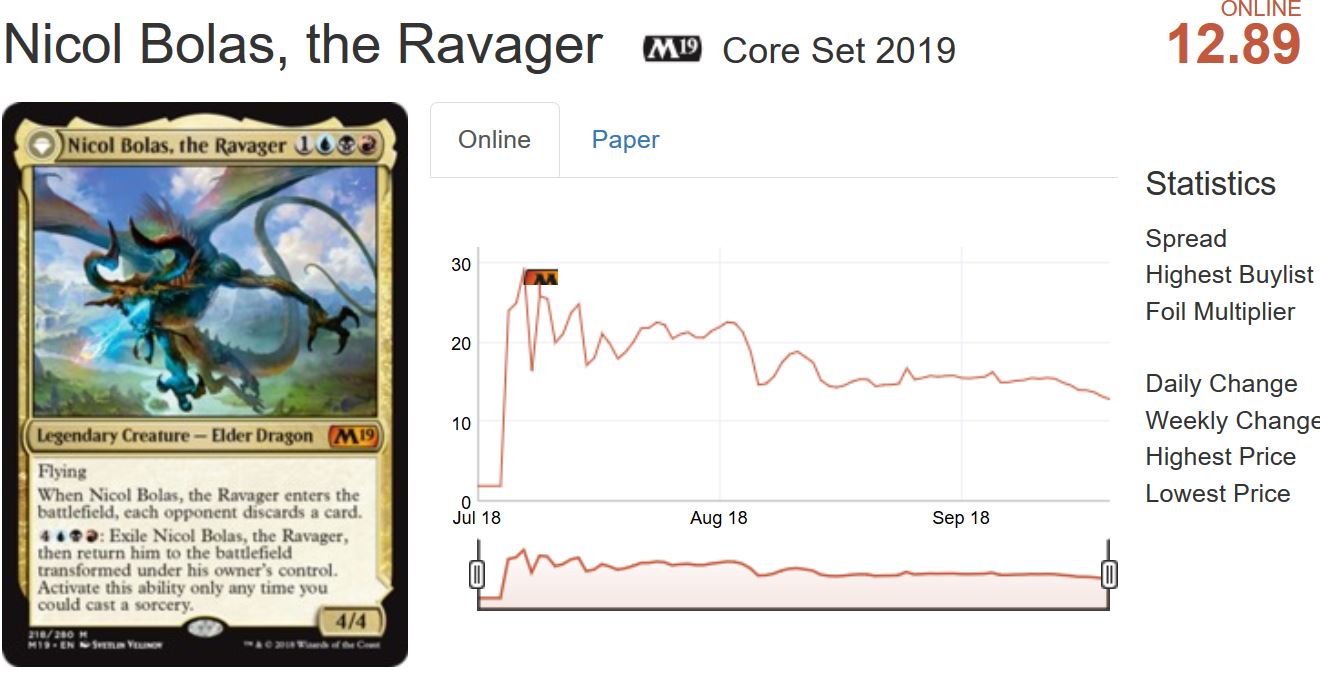 Nicol Bolas decks will have to be base-blue in Guilds of Ravnica Standard, given the mana bases available. I expressed deep skepticism in my Core 19 Power Rankings article that a shell for Bolas would materialize so quickly, and the market now seems to share that skepticism. Bolas’s financial trajectory this Standard season depends upon this ragtag group‘s ability to complement him, a group that looks too much like the band of brigands in Augustine’s City of God for me to take seriously.

Financial Outlook: Don’t Buy. For the next several months, it seems unlikely that Nicol Bolas will sustain enough demand to command a value of 15 tix, and likely will spend time below 10 tix. As more cards get added to the Standard card pool Nicol Bolas will become a stronger option, so I’d look to buy sometime between November and February. In the grand scheme of things, there’s not much harm in buying your playset now if you plan to hold onto them for the next 9 to 12 months.

The last day of spoilers delivered for Bant Nexus of Fate aficionados all around the world. Pause for Reflection will replace Haze of Pollen as Fog numbers five through eight for the deck should it need that many Fogs.  The good news for everyone else is that this particular Fog variant is perhaps the worst possible variant Bant Nexus could receive since it doesn’t play creatures. Nevertheless, I expect the deck to march forward as a competitive tier 1 or tier 1.5 option. Bant Nexus will lose less than every other competitive archetype at rotation.

Financial Outlook: Don’t Buy. Nexus of Fate will have a high treasure chest curated frequency going forward. Since this card will likely go in one deck and one deck alone, I can’t imagine it increasing in price. A trend down toward the 3 to 5 tix range is likely. 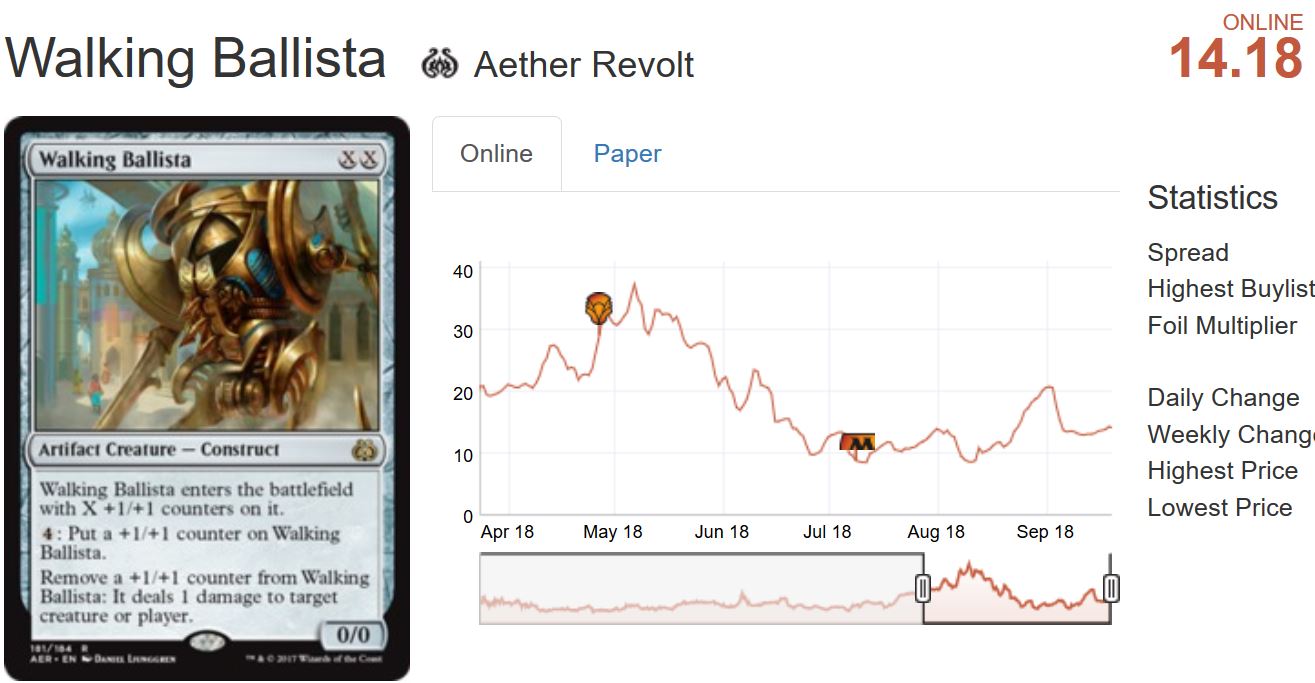 Speculating on Modern is something I’m growing more and more reluctant to do. Most of Walking Ballista’s demand comes from Modern, Legacy, Vintage, and Commander, so it’s not going to crater in price next week. Walking Ballista is a centerpiece for certain Tron and Affinity decks, and that will keep its value high.

Financial Outlook: Buy at Rotation. Walking Ballista is a known quantity, making it less likely to skyrocket in value than other recent additions to Modern that took a bit of time to catch on and find their place, cards like Collective Brutality or Liliana, the Last Hope. I think it highly unlikely that Walking Ballista will fall below 10 tix or rise above 30 tix over the next year. It should gradually uptick in value, with significant fluctuations probable as the metagame develops. 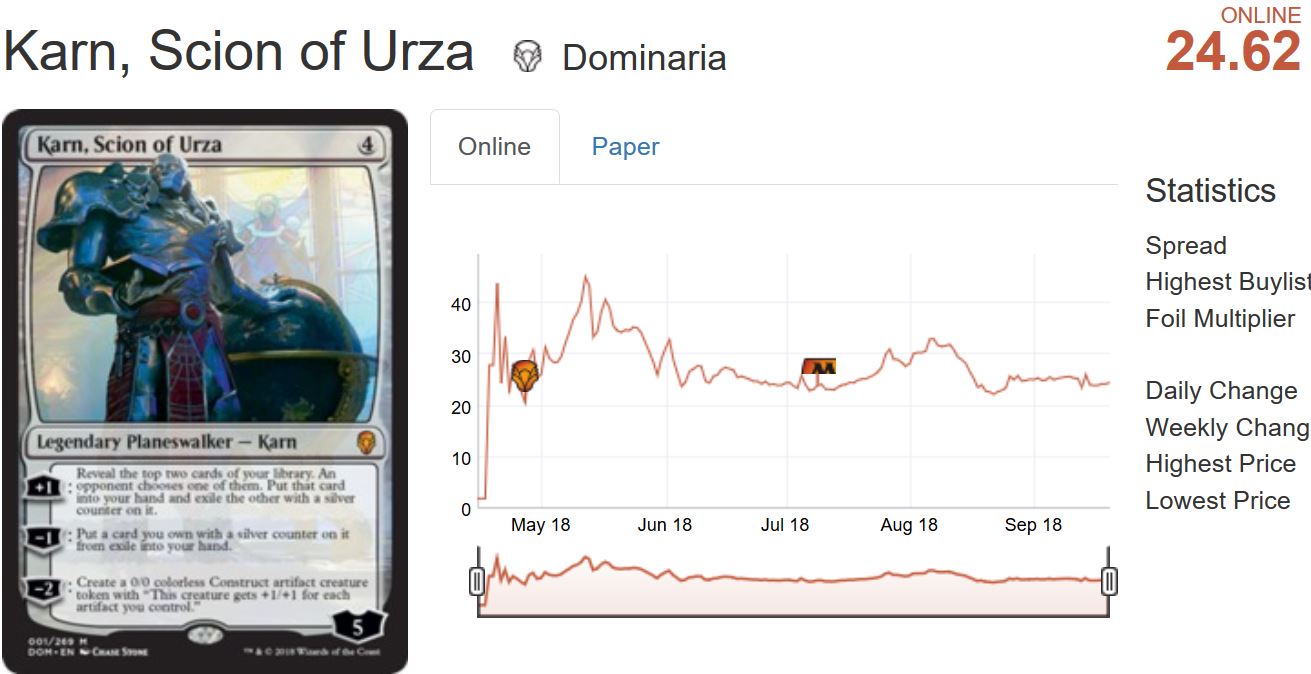 Karn is going to get a lot worse at rotation when colorless all-stars Heart of Kiran and Scrapheap Scrounger leave the format. I expect it still to see play because it is a good card advantage engine, but overall demand will decline. It is impossible to pinpoint exactly how much play Karn because of its generic nature. Some of its value is coming from Modern demand, and that is unlikely to change.

Financial Outlook: Buy to Play. This one has a low floor and a high ceiling. My gut tells me that Karn will be viewed more like something you have to play if you don’t have a better option instead of something you actively desire to carve room for in your deck. If that prediction pans out, Karn will likely be a 15-tix card in Guilds of Ravnica Standard. If, however, multiple decks want copies of Karn somewhere in their 75, expect Karn to maintain a 25- to 30-tix price tag. I don’t think the card is good enough to get higher than that absent colorless synergy.

With Hazoret, the Fervent and Chandra, Torch of  Defiance leaving the format, Rekindling Phoenix will now become the unquestioned premier midrange threat for red decks. Only four removal spells deal cleanly with it, and so I expect it to remain a major reason to play red going forward. While red will likely lose metagame share, Rekindling Phoenix should be a playset in every red deck.

Financial Outlook: Buy to Play. Over the past nine months, Rekindling Phoenix has had a floor of 20 to 25 tix while experiencing sustained price spikes up to 40 tix. I expect that trend to continue, perhaps with future peaks closer to 32 to 35 tix. The only way this card falls lower than 20 tix is if red is shut out of the metagame, a phenomenon that I think is possible but unlikely, especially as new red cards are added to Standard that make bringing Chainwhirler back into the maindeck a possibility. I’d probably only buy as an investor if it dipped closer to 20 tix, but as a player, I’m more than content to pick up my playset now.

Teferi will continue to be a Standard-defining card. Every deck Teferi is in now survives rotation, and both absolute sweepers (Settle the Wreckage and Cleansing Nova) are white. Guilds of Ravnica mana will make Jeskai Control a good home for Teferi, although Chromium, the Mutable might keep the deck mostly UW splashing Black.

Financial Outlook: Buy Now. Teferi will be a 40- to 50-tix card in the future. If that seems high, remember that both Modern and Standard have significant demand on MTGO. We’re definitely past the point where investing in Teferi is a smart play, but those looking to play Standard over the next year should go ahead and bite the bullet now, lest they have to pay more in the future.