I continue to browse MTG Stocks every day, checking out the Interests page to identify top movers and shakers. On the surface, the market appears to remain calm. In fact many Old School staples have had a steady, downward trajectory these past few months.

It comes as no surprise that various Standard cards are lighting up the charts, however. Star of Extinction was the latest card to spike, but there are plenty of other cards that offered solid return on investment as the new metagame unfolds. Despite having no interest in the format, even I managed to blunder into some profits on Runaway Steam-Kin.

But if we dig a little deeper—beyond Standard and beyond MTG Stocks—I believe there are some tectonic shifts taking place in the market. This week I want to examine some very recent shifts in vendor buylists that may be an indication of what’s to come.

The Trees are Singing

There continue to be market forces that drive demand (maybe artificial, maybe real) for cards from Magic’s earliest sets. I was fairly convinced we would see sideways to downward motion on prices for at least a few more months. After spiking pretty hard, the pullback on cards that are rare but not very playable is easy to see on a chart. Look at Singing Tree, for example.

I was fully expecting to see this card continue a listless move sideways with little catalyst on the horizon. Then a couple of things caught my eye out of nowhere. 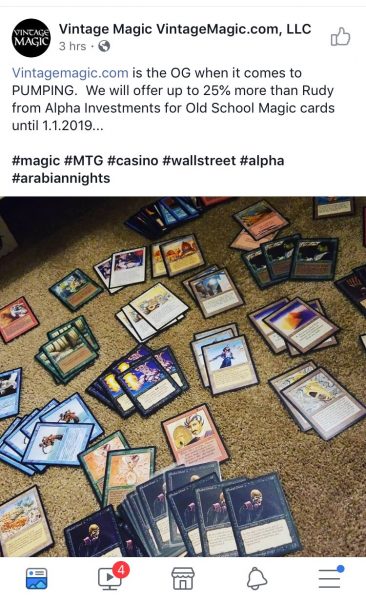 We all know how much Daniel Chang and Rudy of Alpha Investments have catalyzed higher prices for these cards. They’ve become controversial figures in the community for being so open about purchasing many copies of the same old cards. Let’s put judgment aside for a moment. Whether we like it or not, posts like these can catalyze panic-buying and higher demand.

But we don’t need to seek out boogie men to find a reason for climbing Arabian Nights prices. Recently, Card Kingdom has been displaying some fairly aggressive buy prices on certain cards. In fact, check out this buylist I just submitted this past week!

This is an extremely aggressive buy price, especially given how generous Card Kingdom is when paying a downgrade percentage. I predict my copy will be EX, which means I should net just over $85 for my copy. That’s about $7 below market price on TCGplayer—after fees there’s no way I could have made that much selling on eBay.

While We’re at Card Kingdom…

For a couple months, I’ve been watching Card Kingdom’s buylist prices on Old School cards drop steadily. Then, out of nowhere, it appears Card Kingdom decided to suddenly jack up buy prices on certain cards. I watched them up their buy price on Singing Tree from $55 to $75 to $95 over the course of a couple days.

I observe these trends because I literally browse their buylist at least twice a day. Obsessed? Possibly. But when prices move so quickly (they already dropped Singing Tree down to $85 for example), catching the peak can mean an extra bit of cash in my account.

These sudden buylist bumps go beyond just green creatures from Arabian Nights, too. For a hot minute they had a $1400 buylist on Library of Alexandria. That lasted about a day until they presumably got more copies back in stock. They also had a buy price on Bazaar of Baghdad of around $1200 but that didn’t last either.

Funny enough, Star City Games currently has a $1200 buy price on Near Mint Bazaars. If you’ve got a minty copy you want to buylist, ship to SCG. If your copy has any wear whatsoever, you will be better off sticking to Card Kingdom because their downgrade percentage is more generous.

Most recently, Card Kingdom has upped their buy price on Arabian Nights City of Brass.

They were paying less and less over the past couple months, then suddenly they upped their buy price to $315. That’s quite aggressive. And it’s not like they’re out of stock and eagerly trying to replenish. That was the case for Library of Alexandria, where they were down to just a single played copy in stock at one point. CK has ten Cities in stock, four being VG and six G. While I’m sure they’d prefer some minty copies in stock, they aren’t exactly out of the card.

Before moving on, here are some other aggressive Card Kingdom numbers worth your consideration:

If you are wondering why Card Kingdom has zero NM Arabian Nights City of Brass in stock, you may not have to look very far for a reason. ABU Games currently has a $351 buy price on the card. Cash! Their ridiculous credit number is up to $802.50! But their played buy prices aren’t as generous as Card Kingdom’s, hence why CK probably has only played copies in stock.

In fact, ABU Games continues to have best-in-class buy prices on near mint Arabian Nights cards. And I’m not even referring to their crazy credit offers (more on that in a sec). We’re talking cash. $92.14 for Singing Tree and $113.10 for Ifh-Biff Efreet are two other best-in-class cash buy prices on the site.

Admittedly, they aren’t paying that great on other Arabian Nights cards. And I suspect the same can be said for Legends and Antiquities. There are probably a few stand-outs, but no noteworthy trend.

Then you look at their Alpha, Beta, and Unlimited numbers and all bets are off.

ABU Games pays an exorbitant amount of store credit for cards from Magic’s first three sets. I know I’ve written about this in the past, but I need to bring this up again because just this past week they increased their numbers even further! Seriously! I have a few random Alpha uncommons I’ve been thinking of unloading now that prices have settled, and I was shocked to find out that I could get $85.50 in store credit for my played Fire Elemental.

That’s an impressive number. But if you really want to have your socks knocked off, you have to examine numbers for some of the more playable Old School cards. A played Unlimited Chaos Orb will only fetch you $412.42 in cash, but you can get a whopping $1282.50 in store credit! That puts Card Kingdom’s and Star City Games’s numbers far behind, even with credit bonuses. A played, Unlimited Underground Sea will net you $1425 in store credit. If you prefer cash, you’re better off shipping to Card Kingdom, but this is a crazily high store credit number.

Don’t even get me started on Power (a played Unlimited Black Lotus fetches you $9975 in store credit). Across the board, ABU Games is offering even more in store credit for your desirable Alpha, Beta, and Unlimited cards. This in addition to their occasionally aggressive numbers on Near Mint stuff from Magic’s earliest expansions.

Who is more to-blame here for inflated prices now? Daniel Chang for his goofy post, which was likely a friendly jab at Rudy, or ABU Games for their inflationary practices on Old School cards?

Before you start planning your retirement on Alpha Glasses of Urzas, however, you need to be aware of a couple things. First and foremost, ABU Games increased both their buylist credit numbers and their sell prices. The two move together in tandem (naturally), so while $1200 sounds like a huge number, it really isn’t convertible to cash so easily.

In reality, I would assume 60-70% value when trading into ABU Games. In other words, $1200 in trade credit should net you cards that you could sell for $720-$840. This still beats their cash pricing most of the time, but it does represent an inefficiency when dealing with ABU Games.

Even Card Kingdom has higher prices on most cards now, when compared to TCGplayer. At one point in time, you could acquire “Good” Beta and Unlimited cards for below TCG low pricing because of Card Kigndom’s aggressive downgrade on “Good” pricing. But recently their prices have caught up with the rest of the market—they have plenty in stock now, but the pricing isn’t as much of a steal as it once was. Keep this in mind when trading into Card Kingdom for store credit. Lately I’ve been sticking to cash.

Lastly, keep in mind that these strengthening buylists are somewhat isolated. ABU Games may be offering a load of credit for Alpha, Beta, and Unlimited cards, but their cash prices from those sets are unexciting. Their numbers are very inconsistent from the early expansions. Card Kingdom is the same way—pockets of aggressive numbers, but at the same time they also have many weaker numbers. For example, their buy prices on Legends cards are all much lower than they were a couple months ago.

Put simply, we need to continue monitoring these movements closely. There are some opportunities that could arise (such as Singing Tree) and we need to be prepared. But by no means can we declare that we’re out of the woods yet on this pullback. But with the way some big time market movers are behaving, you never know.

I felt obligated to return to the subject of Old School buylist prices because the market has been so dynamic lately. ABU Games made some dramatic changes to their trade credit numbers just this past week, and these should be flagged. This is yet another move by the large retailer that furthers their inflationary problems.

If you have any store credit with ABU Games, I encourage you to spend it all immediately. At the rate things are going, they could one day be dealing solely in store credit rather than cash because of the large divide in value between the two. Keep this in mind.

Card Kingdom’s credit is far more stable, but their sell prices aren’t as attractive as they once were either. At least, not on Old School stuff. I’m sure you can find opportunities on their site—well priced cards from other sets. I’m just reacting to the market I track most closely. And from this vantage point, things are very much in flux right now. Other than Standard, this is probably the most interesting market at this moment. And since I know so little about Standard, I will stick to reporting on the news as I see it from the Old School vantage point.

3 thoughts on “Latest Changes to Buylists”