Welcome to the MTGO Market Report as compiled by Matthew Lewis. The report covers the fundamental speculative strategies that anyone can use to build an MTGO portfolio and harvest tix from the digital Magic economy. The three fundamental strategies involve foil mythic rares, and then boosters and sets of the most recent draft format.

The ordinary application of this strategy is to buy each of the foil mythic rares from the new set and hold them for a couple of months before selling them. Value flows to the redemption choke point of mythic rares and doubly so for the foil versions. With GRN foil mythic rares though, there was a substantial curveball thrown by Wizards of the Coast (WotC).

Identifying the mythic rares to avoid was tricky. There was no official information to go by, and MTGO events were starting before paper prerelease events so there was no word-of-mouth information either. The starting point I chose for this strategy then was to avoid any mythic rare with a guild watermark. My assumption was that the watermarked mythic rares would be showing up as a foil in the seeded boosters.

This meant I would target Thousand-Year Storm, Ral, Izzet Viceroy, Vraska, Golgari Queen, Arclight Phoenix, Nullhide Ferox, and Divine Visitation. Check out the price evolution of a foil version of Ral, Izzet Viceroy with a chart courtesy of Goatbots. 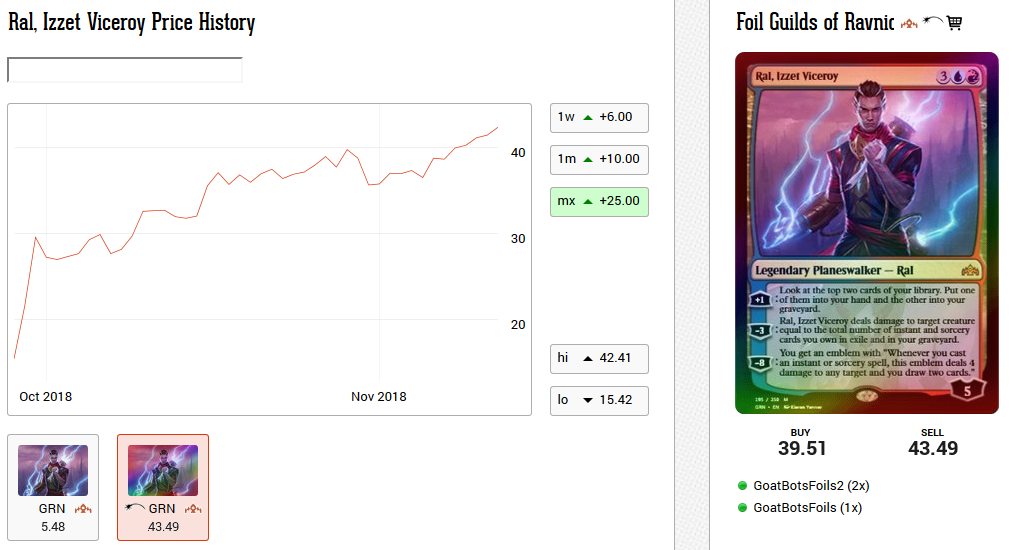 With this short list in place, I began buying as many of these as possible. Almost all of my transactions were with GoatBots, as they are the most visible of the major bots when it comes to foils. Even still, the availability of these foils was low. It took steady monitoring of the market and multiple transactions, sometimes just buying a single copy.

Purchases were spread out over the first days of the release window, but by the weekend I had a nagging feeling that my list of "safe" mythic rares to target wasn't quite right. It seemed like it was quite easy to buy Thousand-Year Storm relative to the other mythic rares on my list, but I couldn't quite figure out why.

By the weekend, Foilbot (the Cardbot bot chain dumping ground for foils of all kinds) was well stocked with multiple copies of Lazav, the Multifarious, Trostani Discordant, Aurelia, Exemplar of Justice, Underrealm Lich, and Thousand-Year Storm. The rest of the mythic rares were nowhere to be seen, but full playsets of each of these were available to purchase.

This is when I realized that my initial assumption about the seeded boosters was incorrect. It was only possible to open one mythic rare from each guild in the seeded boosters, and the evidence was that the widely available ones were the ones being opened.

This is when I went into the next stage. I added Doom Whisperer, Dream Eater, Mnemonic Betrayal, Chance for Glory, and March of the Multitudes to my buy list, while removing Thousand-Year Storm. This meant I had to sell all the copies of Thousand-Year Storm that I had already purchased, even at a loss. 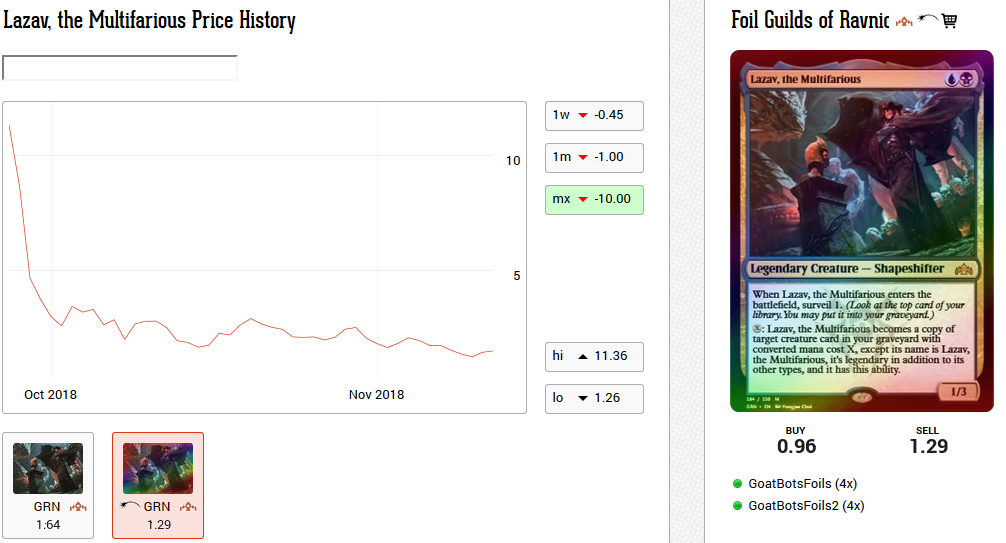 The strategy got me into 105 copies of foil mythic rares at an average price of 20.4 tix per copy. This includes the false start I had with Thousand-Year Storm. The current average buy price of the eleven mythic rares not in the seeded boosters is 25.5 tix, and I expect total returns to be in the 30- to 40-percent range after exiting the strategy. Foil sets of GRN have just entered the store for redemption, so the selling window on foil mythic rares is now open. I'll be unwinding this trade over the next couple of weeks as long as prices remain fairly stable.

Realizing the nature of the seeded boosters was essential to successfully implementing the foil mythic rare strategy this time around. For speculators, this is great news: if you can identify which ones show up in the seeded boosters, you can avoid these and load up on the rest.

The next buying window for foil mythic rares will occur with the start of RNA limited events on MTGO. This strategy is quite a crowded trade these days, so implementing it requires  more leg work than the other two strategies. If you have time, check in periodically with the foil bots in the first week of RNA's availability and buy up any of the foil mythic rares that are not in the seeded boosters. If you can't tell which is which, don't buy any RNA foil mythic rare for less than 10 tix. This is a good rule of thumb that should keep speculators out of trouble.

This time around, I was targeting full sets of M19. Between September 19 and October 1, I bought forty sets of M19 for an average price of 61.4 tix. The lowest price was 58.0 tix and the highest price was 64.1 tix. The current sell price is 75 tix; if we assume a ten-percent spread between buy and sell prices, then the current profit is a net gain of ten percent, or about 6 tix per set.

I have not yet sold any M19 sets as I am waiting for the store to restock regular M19 sets for redemption. They are technically available for redemption until December 4. When the store gets restocked, I would expect a surge in demand for M19 sets to result in a price peak in the 80- to 90-tix range. That's when I anticipate unwinding my position in M19 sets.

For GRN, the buy window will open sometime over the last week of December and into the first week of January. With RNA paper prereleases set for January 19, 2019, you will want to be done with your purchases by this time. It's a little early to predict what the price low will be for GRN, but my early guess is that it will be in the 70 to 75 tix range.

I was a heavy buyer of M19 boosters as soon as GRN events went live on MTGO. I was able to buy 190 draft sets for an average price of 5.9 tix, with 5.8 tix the lowest price and 6.0 tix the highest price. Currently, a draft set is selling for 6.7 tix and the buy price is 6.5 tix. The implied net profit is ten percent or 0.6 tix per draft set.

I have not yet sold any M19 draft sets. The set will be available to draft right up until the release of RNA, so the best time to sell these has not yet occurred. Ulimate Masters is set for release in early December, followed by the usual round of Holiday Cube. Given this, it's important not to get caught with too many M19 draft sets as we get into December, as these events can impact the demand for M19 draft.

Returns so far have not matched up to the returns on Dominaria (DOM) draft sets from the summer, which is understandable as that was widely felt to be the best draft format in a long time. With all of this in mind, I will begin to unwind my position in M19 draft sets in coming weeks.

The buy window for GRN draft sets will open after the release of RNA in January. Six tix seems to be a reasonable price for draft sets, so I will be looking to buy up to 200 sets of GRN at that price. Do not start buying until RNA limited events begin, as that is when players really start selling their extra boosters.