Every day we are bombarded with numerous choices.

Magic finance is yet another realm where we have to be cognizant of the plethora of choices available. We all have monetary limitations, even if they may vary dramatically person to person. Every spec carries with it an opportunity cost—so how do we choose which potential specs to pursue?

First off we need to know our limitations. In this instance it is likely best to write down your financial restrictions, though admittedly I've been willing to bend said limitations in the past if a really good opportunity arose. The reason you write it down is because when you write something down your brain "encodes" it and has a better likelihood of remembering it. This same thing occurs for goals, which is why experts tell you to write down your goals, as those who do tend to reach them considerably more often.

Now that we have our financial restriction written, we will want to move on to writing down our MTG financial goals. Doing so in this order is important because it provides us with a parameter of which to help us define our goals. When I'm faced with a large project at work, the first thing I look for is a list of requirements for the project to be considered a success. In the Magic finance realm this would be your goals and restrictions.

For example; let's say we would like the costs of playing Magic to be net-zero over the year, which means that we make back all that we spend. However, we are also limited in what we can spend each month, thanks to typically being paid on a weekly, bi-weekly, or twice-a-month payscale at most places of employment and having additional living expenses to be concerned about.

So let's restrict our Magic expenses to $200 a month. This means that throughout the year we can only spend $2400 on Magic, but we also need to make $2400 through sales opportunities and tournament winnings.

I can't help much when it comes to money made through tournament winnings, as my success at tournaments is rather limited. I tend to look at most as having a bad Return on Investment (ROI), because the likelihood that you make a profit is typically lower than that you will lose money. For example, SCG Cleveland costs $60 to enter—if you don't make top 64 you lose $60. If you make it to anywhere between 64th and 33rd place you make $40. From 32nd to 17th place you make $140. All that for two days of grueling grinding.

Selling cards is where I shine. The most important thing to remember is that the definition of profit is the difference between what you paid for something and what you net after you sell it, which includes all marketplace fees, shipping fees, etc. I bring this up because it's easy to get greedy and always try to sell at the peak. Unfortunately, nobody knows where the peak is until it's already passed, and the number of buyers at the peak price is typically minimal—hence why the price drops to entice more buyers.

It's also easy to forget that the cheaper a card retails for, the more the marketplace and shipping fees cut into any potential profits. If we assume TCGplayer is your marketplace of choice, then here is a handy table showing the flat fees per transaction. Those fees include: the flat $0.3 fee for every payment; a shipping fee associated with a plain white envelope; and the supplies to properly ship a card, including top loader, envelope, and stamp (which amount to $0.6).

As you can see, the smaller the sale the bigger the flat fee eats into any potential profits. You can't buy less than $2 worth of cards from a vendor on TCGplayer, but I included the $1 item to show you how much they can eat into profits.

When you are evaluating an opportunity, understanding these costs can be critical. For example, say we see some hot new Standard rare show up as a two-of in the sideboard of the winning deck at the Mythic Championship. If that card's current value is $1, then even if it triples in price to $3, your profit could be as low as $0.75 after factoring in all the selling fees. In this case, that probably wouldn't be worth the effort.

Now the good news is that because shipping is by far the biggest flat fee cost with each transaction, if cards are purchased in multiples then your profit loss is spread out over that number of cards. This means that it might be worth it to jump onto that spec train if you think you'll sell them in groups of more than one, which is especially relevant for maindeck four-ofs. Whereas there's a bit more risk in sideboard cards typically played as one- or two-ofs.

One thing we do at the company I work for is called a Risk Burn Down. The basic premise is to think of all the things that can go wrong with a build, and then work your way back to eliminating the risk associated with those concerns. With Magic cards there are fewer types of risk than with building large machinery, but there are still plenty.

We have very little control over metagame shifts. Mitigating this type of risk requires constant vigilance of deck performance, and sifting through a lot of data. This is one area that benefits from the group hivemind of the QS Discord channel, as members will often bring this information to light as soon as it's available.

While gathering this data is still cumbersome, you can find much of it in just a few locations. Other places I like to check are MTGGoldfish and MTGTop8.

Luckily, WotC usually does a good job of letting its customers know what products are on the horizon (except for UMA—that one surprised most of us). Knowing the products in the pipeline, we can make educated guesses regarding any particular card's likelihood of reprint, though again it's important to stress that none of us has perfect information and even the hivemind can be wrong.

This one can be tricky if only because we've seen a lot of power creep from WotC card design over the years. It is likely that a fair number of currently powerful cards will be eclipsed, eventually. However, that creep isn't exponential year-to-year—risk is minimized as long as your planned selling time frame isn't extremely far out into the future.

However, with a set like Modern Horizons on the...horizon (the pun was too easy and I couldn't resist), this risk may actually take a front seat for the near future. We should start expecting more spoilers after War of the Spark releases.

After the latest Banned and Restricted update, which announced no changes, Faithless Looting has gone on to dominate most large events. Many people think the card's time in Modern is coming to an end. Because of this fear, we are seeing the cards most often paired with it start to slip in value, despite putting up such solid performances. 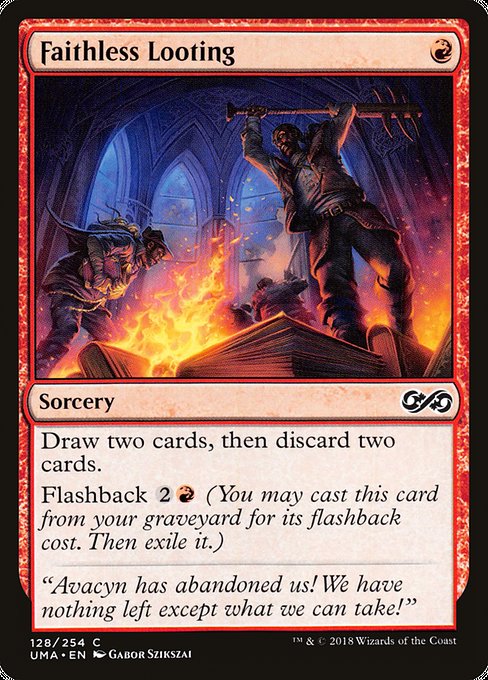 I expect this trend to continue at least until the next B&R announcement, which will likely decide Looting's ultimate fate. Either it dodges the next B&R and WotC decides they are okay with it, or it gets the banhammer and the metagame shifts.

The point here is that when cards are banned, the cards they are most often played with also tend to take a financial hit. Thus your speculation target may not get banned, but if its partner in crime is, it still loses value.

Join me for my next article where I'll discuss some more factors to consider when evaluating speculation opportunities.