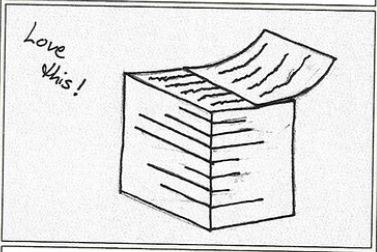 Here’s a riddle for you: what cards can be obtained from tournaments but aren’t tournament legal, and are still in print yet are rarer than an Alpha rare?

Despite its paradoxical nature, the answer is probably obvious to most: Mystery Edition Test Print cards, of course!

I’m not sure how closely the community is tracking these cards, but their prices are a bit all over the place. Many of these cards have both limited supply as well as limited demand—some are not all that interesting, while others are a casual player’s dream. 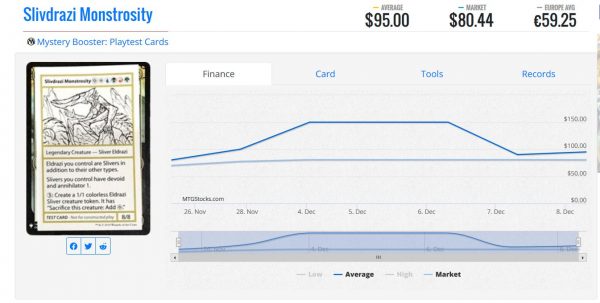 This week I’m doing a deep dive into these interesting cards, explaining my current approach and dwelling on their potential trajectory.

Let’s track some assumptions and try to ballpark total market supply on these cards.

These playtest cards can only be obtained, one at a time, from special convention Mystery Booster packs. The packs are handed out during side events at MagicFests. A conservative estimate would be that 500 players, on average, participate in a Mystery Booster side event. At six packs per player in a sealed event, that equates to 3,000 boosters opened. Accounting for drafts and prize packs (are those a thing?) we can bump this to 4,000 boosters in total.

Each booster contains one playtest card. There are 121 unique playtest cards—assuming they all have the same rarity, that means each MagicFest event would introduce 33 complete sets of playtest cards. If we multiply this across 50 events over the year+ these will be in print, we get to around 1,700 copies of each playtest card entering the market. 1,700! Since these have only been out for a month now, the actual market supply today is a small fraction of that. Hence why these are far rarer than an Alpha rare at the moment.

After these boosters are done entering the market, I still estimate that each individual playtest card will be rarer than a Beta rare (~3,200 of each). Those are some rare cards! Don't forget even the most useless of Beta rares still sells for a pretty penny. 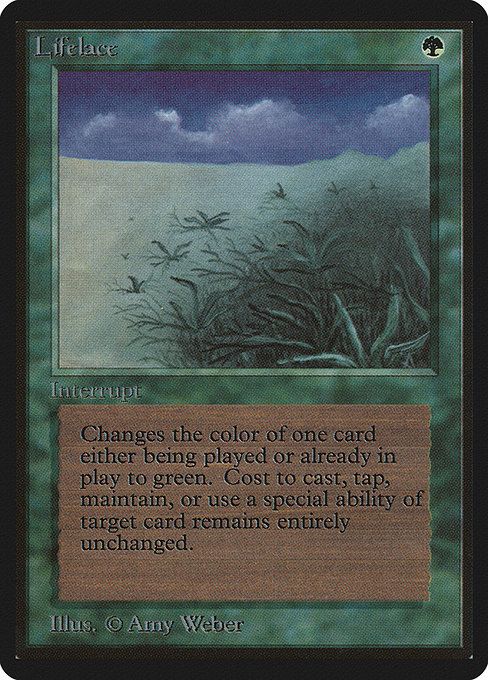 Pricing is All Over the Place

How does one go about pricing cards that are so rare, yet have such variable demand? To parallel the stock market, these playtest cards are almost trading like OTC (“over the counter”) stocks. OTC Stocks are only traded directly through a network of brokers and dealers; they aren’t traded on an exchange (e.g. New York Stock Exchange). Similarly, these cards are currently traded via peer-to-peer sites such as TCGPlayer and eBay. Card Kingdom is currently the only vendor that currently offers playtest cards for sale, and they’re out of stock on many of them. 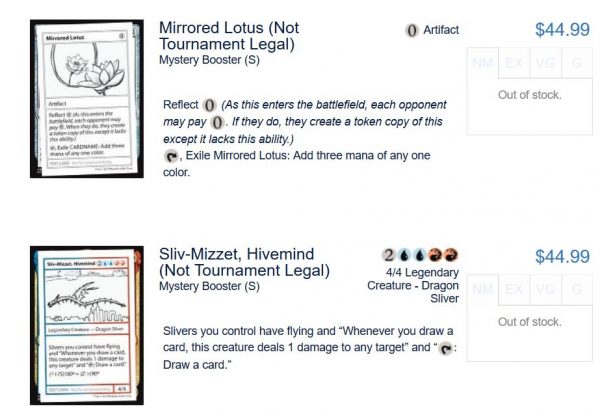 Because these aren’t well-stocked at major vendors, it’s difficult to identify an appropriate price for most of these cards. In true form, the right price for any given playtest card is simply “whatever someone is willing to pay for it.” Judging by eBay listings, that price is anything but consistent.

For example, how would you price a copy of Queue of Beetles to sell? Card Kingdom is currently sold out at (of course) with a $5.99 price tag. Their buylist is $4, so that’s the floor. How about the ceiling? Looking at eBay completed listings doesn’t help all that much: 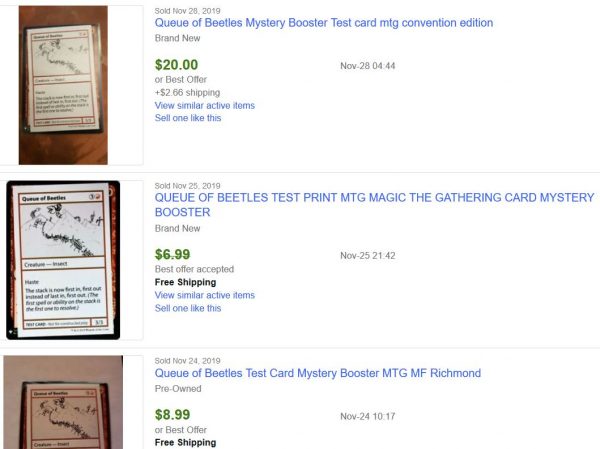 It seems a $7-$9 price point was appropriate, but what person was willing to pay $20 for this card back in late November? Is this really a $20 card?

Probably not, seeing as there’s a copy on TCGPlayer currently listed at $9.49. I am one of the few trying to sell a copy. At first, I priced my copy in the $20 range because of that completed listing and the fact that the cheapest available copy on eBay was listed at $37. Since then, I’ve dropped my price all the way down to $8.49 and I still haven’t made the sale.

On the other hand, you have a card like Animate Spell. So far I have purchased a few copies from Card Kingdom at their $5.99 price point. These have sold decently for me on eBay at a price around 3x that of Card Kingdom’s. 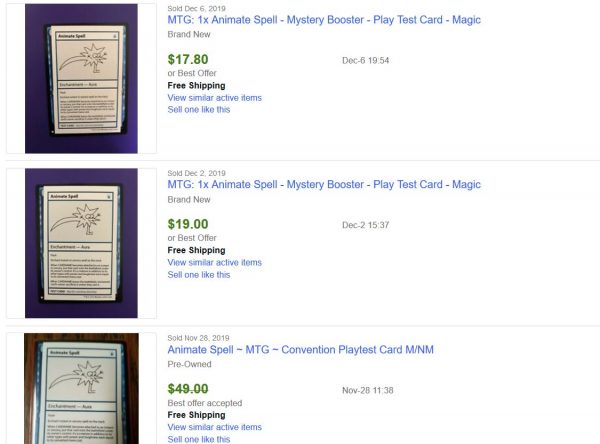 Those top two sales are mine. And while the price is on a downward trajectory, I’m optimistic that I’ll be able to sell another copy or two well north of $5.99 (my current listing is set at $15, TCG low is $17). But again, the key point is that these are priced all over the place depending on where you look.

Card Kingdom Pricing: Too High and Too Low

Since Card Kingdom is currently the only major online vendor with playtest cards for sale, it makes sense to spend some additional time examining their prices. (I see that Channel Fireball has prices for these cards but are currently 100% out of stock).

In keeping with a paradoxical theme this article, I consider Card Kingdom’s prices on playtest cards to be both too high and too low. Of course this doesn’t apply to a single card; instead, I’m describing the inconsistent nature of their pricing.

For the more desirable cards, their prices are well below eBay completed listings and TCGPlayer market price. They’re perpetually sold out of such cards. Examples include Mirrored Lotus, Slivdrazi Monstrosity, and Generated Horizons. In my opinion, any playtest that Card Kingdom has for sale above $20 is priced too low relative to what the market will currently bear.

However, that doesn’t mean only their high-end playtests are underpriced. Card Kingdom remains perpetually sold out of casual favorites such as Banding Sliver and Animate Spell, priced at $7.99 and $5.99 respectively, because these sell for far more on eBay. Any time a copy comes up for sale, it gets purchased right away due to the low price point.

As you get to the less desirable playtest cards, Card Kingdom’s pricing suddenly becomes less attractive. One example is Siege Elemental, which is currently priced at $7.99. Recently sold copies on eBay have sold for between $5 and $10. So while $7.99 isn’t an offensively high price, it’s not one players are eager to buy.

Card Kingdom also has a floor on playtest prices right now—they won’t sell any playtest for less than $5.99. Therefore, they have a bunch of $5.99 playtests in stock. Until they drop the price, it may be tough for them to move certain cards. This includes Biting Remark, Enroll in the Coalition, and Memory Bank. On the other hand, they offer no less than $3 for a given playtest card on their buylist.

Eventually, they may get enough copies of the least interesting playtest cards that they’ll have to drop that floor. Until then, any playtest card can be considered worth at least a few bucks even if no player wants it.

Given the unique nature of these playtest cards and how they’re entering the market, there’s little to use as precedent in predicting their trajectory. A handful of copies of each playtest will gradually enter the market after each MagicFest, to either add to the market’s supply or else be absorbed by player demand.

As this unfolds, I predict two trends. First, the less desirable playtest cards will gradually accumulate on the open market. Supply will climb until there are dozens of copies for sale. The price point on the less interesting cards will fall towards a buck or two, but probably not drop much below that. I don’t expect any playtest card will become true “bulk”.

As for the more desirable playtest cards, these will probably be picked up by casual players as they become opened. Thus, their price will remain more stable. It seems like an eternity from now, but after 2020’s completion these will no longer be opened at events. Once that happens, they drumbeat of supply entering the market will cease, and that is when prices on the select few with the largest impact can truly rise. The group of playtest cards that can truly withstand a $100 price point will be tiny, but I expect there will be at least a couple.

Specifically, keep an eye on Slivdrazi Monstrosity, Mirrored Lotus, any of the Planeswalkers, Puresteel Angel, and Sliv-Mizzet, Hivemind. These strike me as the most desirable from a casual player standpoint, and should, therefore, be the most attractive acquisitions as supply inevitably dries up next year.

Until then, I don’t advocate speculating on these at this stage. If there are certain copies you want to own—especially the casual favorites—then there’s no harm in grabbing them sooner rather than later. But until the faucet of supply is turned off late next year, there will always be new copies entering the market.

Recently I have shifted some focus away from Old School cards (not completely) towards the Mystery Booster playtest cards. With Card Kingdom’s early pricing, I’ve been able to buy and sell different cards profitably while slowly accumulating a few cards for my own personal collection. I’m not breaking the bank with this approach, but it has worked out favorably so far.

Whether enough supply enters to quench demand—or whether players will actually wait for more supply to enter the market before buying—is yet to be seen. As long as players are impatient to acquire cards, though, the buying-to-flip strategy will work. I have to imagine Card Kingdom will gradually shift their buy and sell prices to reflect the market’s movement. Cards that are perpetually out of stock will increase in price, while cards that don’t move will decrease in price. Until then, the best approach is to frequently refresh Card Kingdom’s stock of playtest cards in the hopes of grabbing some underpriced copies.

It may seem like a waste of time, but if you enjoy these casual gems anyway it won’t feel so much like work. Any time I can put effort into Magic finance without feeling like I’m working is a win in my book!