Safety is central to much of what we do at work. The mantra, “Nothing we do is worth getting hurt” comes to mind. Because of this focus, many lines of defense are implemented to avoid injury. People will wear protective equipment such as safety glasses and steel-toed boots. There are safety trainings in place to remind people of safe operating procedures.

The first line of defense, however, is to develop a process where these safety procedures and protective equipment aren’t needed at all. This can be done by engineering the risk out of the system altogether.

In a way, this parallels with counterfeits in Magic. There are many resources out there to help you identify fakes. David Schumann wrote about this back in 2014, and Apathy House contains some of the fundamentals of fake spotting. While these resources will always be highly valuable (fakes can never be avoided completely), we can still implement some buying strategies to help us reduce the risk of receiving a fake in the first place.

With social media touching on counterfeit cards more often lately—and as people may be planning larger Magic purchases with tax returns—I wanted to share my strategy for avoiding counterfeit cards. While not foolproof, I have never received a fake when purchasing a Magic card. I hope to keep that streak going for years to come.

I wish I could say that counterfeit Magic cards could only be obtained from sellers overseas. Many are produced overseas, so this is a reasonable assumption. Unfortunately, it’s incorrect.

If you want to shop around for fake Magic cards, there are always some to be found on eBay. This morning I googled “MTG Black Lotus” and the second listing down appears highly questionable.

At first glance, I didn’t like the coloring on this lotus. It almost seems too bright. The card may look like it has been shuffled in play for 27 years, but I suspect otherwise. But the biggest red flag for me is under “Seller Information”. I blacked out the name, but I left behind the only thing you need to see: the seller’s feedback rating. This seller hasn’t done an eBay transaction in over a year, has just two feedback, and is now deciding out of the blue to sell Magic’s most coveted card?

This is exactly the kind of listing I avoid at all costs to minimize odds of receiving a fake. The only time I’ll purchase high-end cards from eBay is if a major vendor is selling it. I stick with the PWCC auctions, Kid Icarus, Card Kingdom, and ABUGames as my favorite eBay sellers. Other safe eBay sellers include MTG Seattle, Strike Zone, and Power 9 (Dan Bock). In general, any eBay seller with 10,000’s or 100,000’s of feedback is probably safe.

I wish I could tell you that all you have to do is stick to this set list of eBay sellers and you’re guaranteed to dodge fakes. Unfortunately, that’s not the case. While sticking to the major sellers will drastically reduce your chance of receiving a fake, there’s still another layer of complexity that needs to be navigated.

When shopping from these sellers on eBay, you still need to be very careful. You see, many of these sellers place their store name in their listings, making them easy to find and identify. But imposters have caught on. Kid Icarus is a top-rated seller, so all his listings contain the “Top Rated Plus” Ribbon. That is one thing an imposter can’t fake, but they still use the Kid Icarus name to deceive buyers: 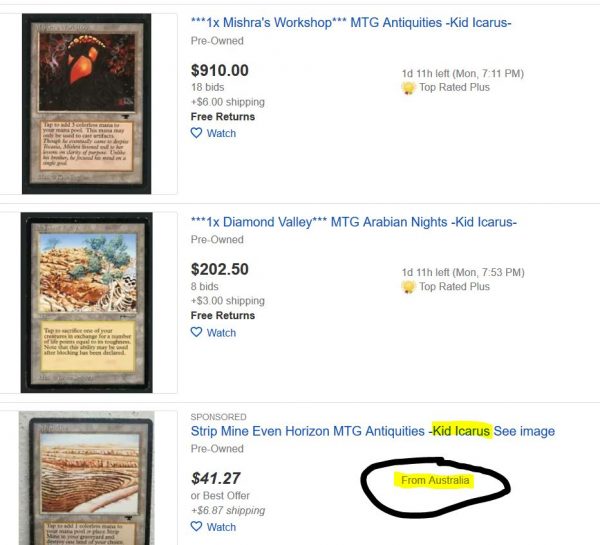 These three listings all contain “Kid Icarus” in the name. But one is not like the others—that last listing is an imposter. The “From Australia” is a dead giveaway.

Imposters aren’t only international, too. Check out this listing from Kentucky:

This seller at least has 781 feedback, so these Wastelands are probably real. But check out that feedback score: 97.9%. That’s dismal in the world of eBay, especially when you have hundreds of transactions to your name. Kid Icarus, this is not. Don’t be fooled by these imposters—always check the seller information before making a purchase.

Another seller with imposters is PWCC: 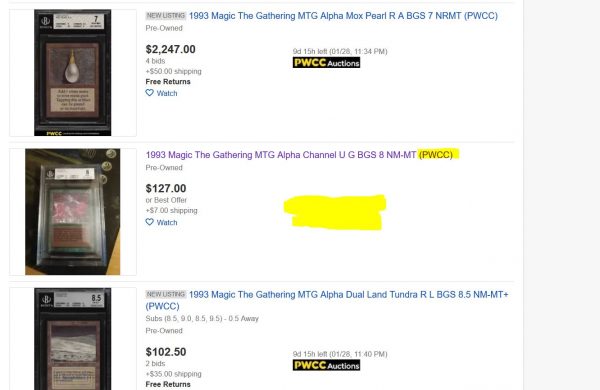 Then there’s the subtle Card Kingdom imposter. Card Kingdom only sells “Below Good” cards on eBay. You can watch for their new listings by saving “MTG Below Good” because that shows up in any of their eBay listings. Unfortunately, others have caught on to this trend—while they’re not stealing Card Kingdom’s name directly, one could be deceived by this subtle (maybe unintentional?) impersonation.

You may bid on this auction thinking you’re getting a card from Card Kingdom, one of the most trusted Magic sellers on the net. Instead, you’d be getting a copy from a small shop in Portland, Oregon. Does this Portland shop have the same staff and expertise to confirm cards are not counterfeit? Doubtful. This card may be 100% legitimate (judging by this seller’s feedback rating, it probably is) but this is the kind of listing I eschew in favor of a more reliable seller.

Reapplying to Other Platforms

It’s difficult to perform the same blatant impersonation when selling on TCGPlayer. Unless you upload pictures, there’s no open field where one can pretend to be a seller they are not. All sellers’ feedback ratings are more prevalently visible too—there’s no chance of purchasing from a Channel Fireball imposter.

That said, there are still large sellers with 10,000+ feedback and smaller sellers with under 10 feedback. Which would you rather buy your Dual Lands from? It’s possible all these sellers with low feedback are selling nothing but genuine cards. But when spending $100’s or $1000’s, is it worth the risk?

For example, check out the listings for Revised Underground Sea: 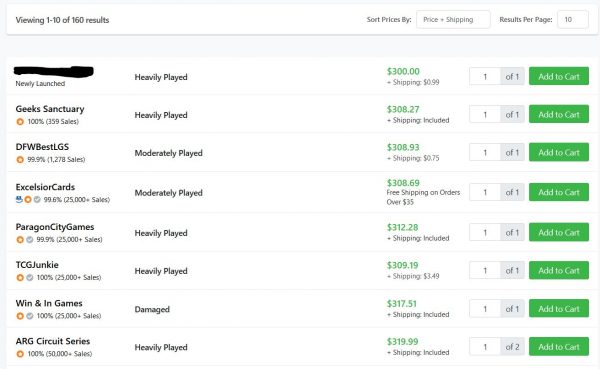 There are a couple hundred copies for sale from over 100 sellers. As is often the case, the new seller lists at a slightly lower price point to try and build up feedback. But would you want a $300 purchase to be this seller’s first sale? Without any feedback, it’s impossible to buy with confidence. TCGPlayer will protect you the buyer from counterfeits, of course, but is that a hassle you’re willing to endure to save 3%? If I were shopping for this card, I’d be more inclined to grab those two MP copies—they’re just $9 more and are sold by stores with 1,000+ and 25,000+ feedback.

This isn’t a blanket statement to knock new sellers. Everyone has to start somewhere. I’m merely cautioning you the buyer when shopping for high-end cards on popular platforms. The newly launched seller may be 100% legitimate—I’m not saying otherwise. All I’m insisting is that sellers with less feedback are, by definition, less vetted by the community for their customer service, card quality, and ability to spot fakes.

TCGPlayer and eBay have customer service teams to protect buyers from counterfeits. If you receive a card you suspect is fake and the seller isn’t cooperating, you can contact their support staff for help.

When buying cards peer to peer through social media like Facebook, Twitter, and Discord, this becomes much trickier. Your recourse could involve much more effort. Or in the worst case, you may have no recourse other than involving the police (talk about a hassle!).

Therefore, one needs to be more cautious when dealing in peer-to-peer transactions. To minimize risk of receiving counterfeits, I have three tips:

None of these tips are breakthrough or eye-opening. But they’re all really important when trying to avoid counterfeit sellers online.

None of the advice in this article can guarantee a card’s authenticity. Any time you purchase a high dollar card, you should scrutinize it closely. I’m sure even major sellers make mistakes once in a while; nobody is perfect.

Instead, this article is geared more towards risk reduction. It really comes down to playing the odds—there are certainly deals to be had out there when buying from new, inexperienced sellers. But you have to ask yourself if it’s worth the risk. Saving 3% may seem inconsequential if it means a higher risk of receiving a counterfeit.

Even some experienced sellers should be scrutinized closely—these are the imposters on eBay posing as other large vendors. They may still be selling legitimate cards, but I don’t like how they’re using deceptive listing titles. It leaves a sour taste in my mouth, and I won’t support such action with my dollars.

I’m sure there are other safe avenues to purchase genuine cards. It’s not like the market for Power is controlled completely by Card Kingdom and ABUGames. Plenty of individuals have these cards for sale as well. In these cases, it’s best to vet sellers as much as possible by asking for references and cross-checking with said references. Usually, if the seller is a bad apple, this becomes apparent somewhat quickly. And as always, if there is any doubt, you are not obligated to complete the transaction.

By following these principles, I have avoided every receiving a counterfeit card. It could be that I’m still very lucky. But I believe that my strategy removes some of the counterfeit risk that’s out there, even though I may have to pay a couple percent more for my cards. This is a price I’m willing to pay to ensure I am receiving genuine cards.