Last week I was in Colombia and visited Bogotá and Villa de Leyva. While I was gone, Theros Beyond Death digital prices have continued to dip - Theros remains a popular draft format, and drafting is still slightly outpacing what I am told is a healthy redemption demand. Since Redemption begins Wednesday (February 12th), this will likely change, causing mythic prices to rise. So now that I've returned to the snow-laden ground of Canada, it's time to examine the financial potential of the Theros mythics.

The value these mythics have is largely located in three areas of demand: Redemption, Pioneer, and Modern. Standard and Legacy demand will have an impact, but nowhere near as much as the other three. We also need to keep in mind that Theros is a heavily drafted set whose final supply will likely be 80-100% of Eldraine's. 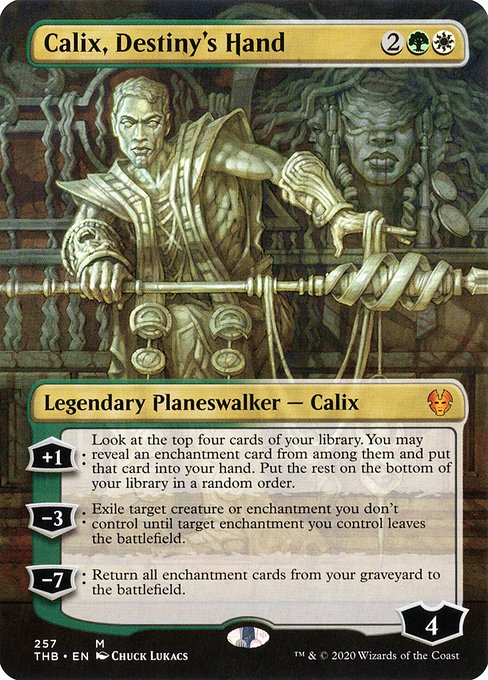 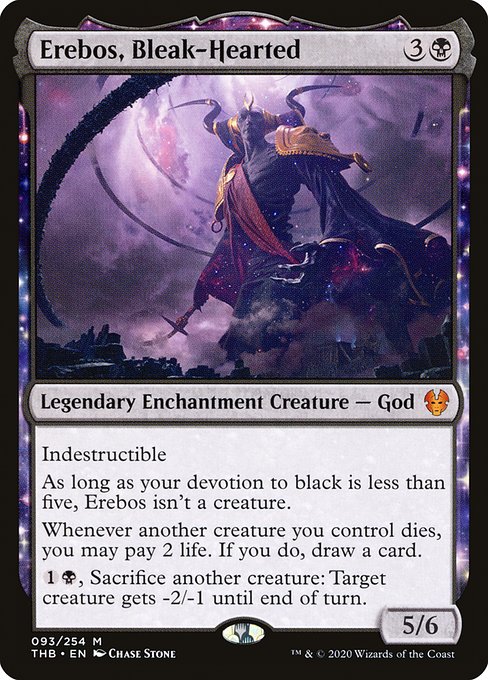 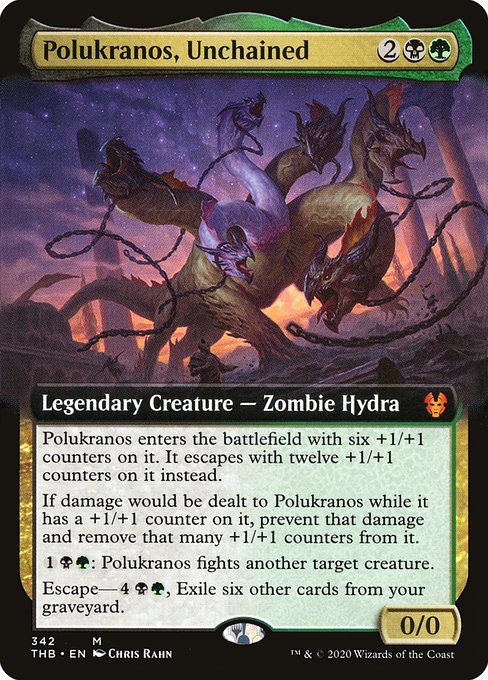 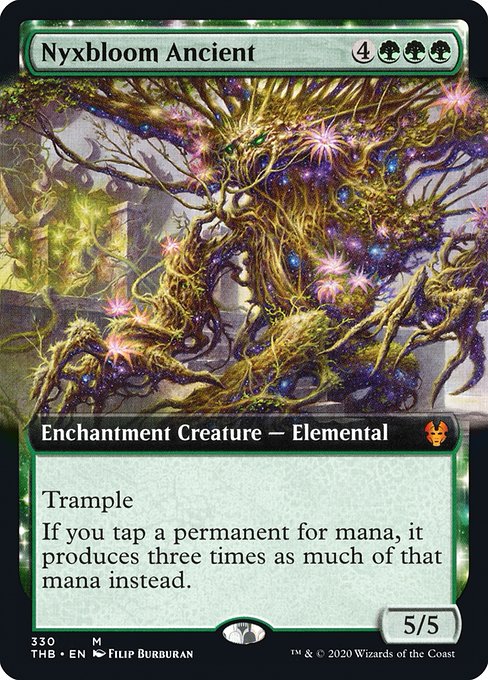 Theros has seven bulk mythics, ranging from Purphoros, Bronze-Blooded at $0.73 to Nyxbloom Ancient at $1.22. The reason these seven are so low is simple - they are seeing virtually no play in any format, and their value is tied entirely to redemption and Commander demand. 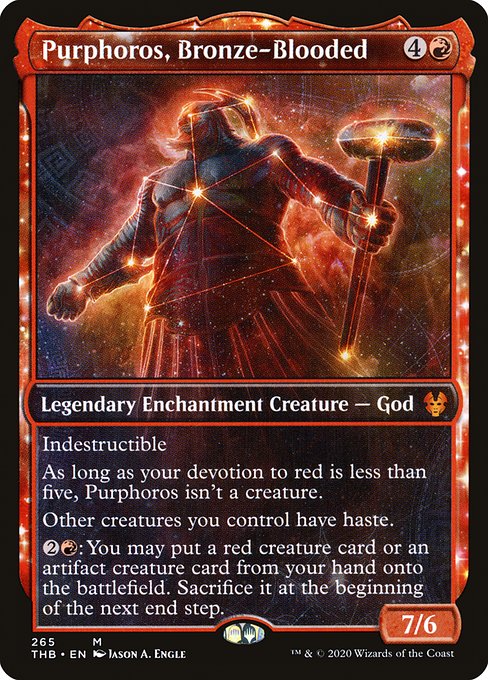 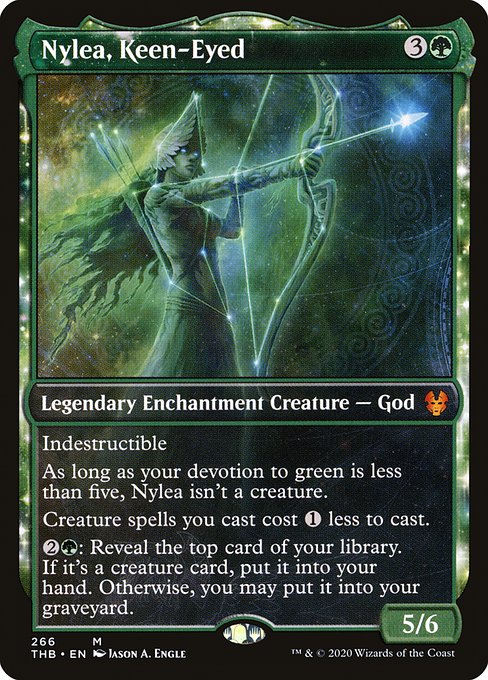 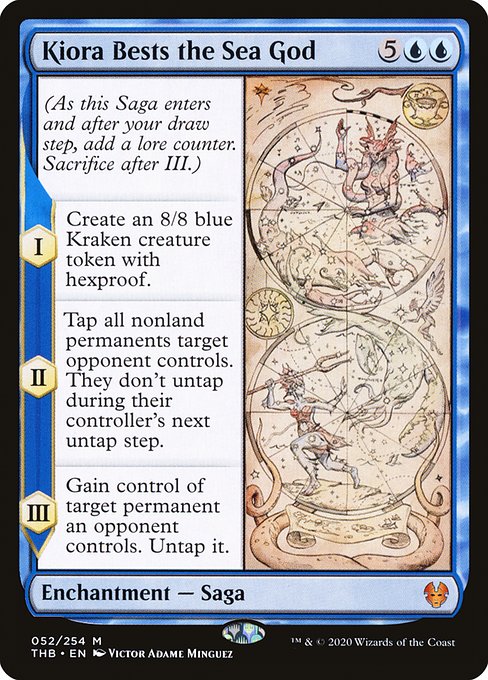 I do not consider any of these to be good speculations or investments. All have low potential to go up and will likely settle about 50% lower than they are now. The only ones that are viable Constructed cards are Nylea, Keen-Eyed and Kiora Bests the Sea God, and I think you will be able to buy both for under $0.50 in a few months if you want to do so.

Unlike those ranked beneath it, I expect Nyxbloom Ancient to maintain its value thanks to high demand amongst the Magic Online Commander community. I also believe there is a slight chance that Nyxbloom Ancient finds its way into Standard depending on what gets printed in future sets. With that said, this does not strike me as a card to invest in, as it is highly likely to remain stagnant.

Erebos is a powerful card and is the only bulk mythic from Theros I could see being an essential part of a tier 1 Standard deck in the future. I don't find it all that likely, however, and thus deem it a mediocre spec. I'd be much more excited about Erebos if it cost one less mana. If Erebos dips below $0.50 or $0.40 I'll grow more tempted.

Many of my favorite specs come in this class. All four of these cards have proven worthy of Constructed play to some extent, and therefore redemption removing many of these from the market will have a stronger effect on supply than for those in the bulk class.

Ashiok has definitely surprised me by seeing play across almost every format. The main reason to hold off on Ashiok is that a large source of its demand comes from the Inverter deck in Pioneer that will possibly be banned sooner than later.

Elspeth sees widespread play across Standard, Modern, and Pioneer because it is a persistent and stabilizing value engine for control players. While she will never be more than a one or two-of in Constructed decks, her role as a better Gift of Immortality is unique and will keep her in demand. I see modest room for growth longterm, but less so in the immediate future as drafting continues apace.

Thassa is a powerful card that is seeing play in Standard and Pioneer. An indestructible blink-engine is a unique tool for Constructed, and I expect competitive players to find new ways to abuse her as time goes on. Put differently, this is a card with high potential, and I like buying in at what will possibly be her floor.

An indestructible Sulfuric Vortex with lifelink and other upsides is insanely potent. Yet, the card hasn't broken out despite seeing play in all formats. Expect the needle on Klothys to move upwards as redemption eats up supply and as players get more time to play with Klothys. This card is just too versatile, and fits into too many shells, for it to remain at its current price going forward.

Of the mythics in this class, Kroxa is the one I least like as a speculation target. It takes significant demand to sustain an $8 price tag, and my worry is that Kroxa is just a little too derpy and inefficient to really breakout in any format. It's more of a potent filler piece than a card to build around, and that scares me a bit. The main argument in its favor is that its demand is highest in Modern, and Modern is due for a resurgence in the coming months. This might be one to revisit if its price declines.

As expected, Uro is the most widely used card from Theros. It has become a format staple Standard and Modern, and is seeing extensive play in Pioneer. In the decks that it goes in it tends to be a full playset, which is different than most of the cards in this article (I've noticed this trend among Theros cards). I also must confess that, once a card is worth more than $30, it's very hard to guess or estimate what the cost of the card should be. We all know the difference between a $10 and $20 card, but it's harder to discern what constitutes a $50 card versus a $60 card.

We have a few historical precedents to guide us. Jace, Vryn's Prodigy reached $90, as did Oko, Thief of Crowns. Uro will not be as dominant as either of those two cards and thus I would expect Uro to peak around $75 when drafting wanes. At its current price, Uro does not make for a great investment because the return as a percentage is too low for the risk incurred. But if you want to own your playset for playing, I don't think buying now is unwise.

Ox of Agonas is a powerful card that is really potent in select graveyard strategies like Dredge. I like that it is a three-of in Dredge, and I like that is room for its demand to grow -- it isn't seeing play in Standard or Pioneer right now. Ox of Agonas is one of those low to medium risk high reward cards that I like to speculate on. It might be a bit early to speculate on the Ox since it's predominantly a Modern card, but I think $5 is still a decent entry point.

I hope you enjoyed this latest installment in the financial power rankings series. Soon I will do the same for the rares and uncommons from Theros, but drafting needs to significantly slow before we even begin to look at investing in rares and uncommons from the set. I've thoroughly enjoyed drafting Theros and, although I couldn't draft while in Colombia, I hope to do some drafting this week. Which Theros cards are you most excited to invest in, either in paper or in digital? Would your rankings look different than mine? Let me know down in the comments below or on Discord. Have a good week and I'll see you next time!