Hello, everyone! I'm Adrian. I used to cover MTGO content here about two years back and am glad to be sharing new content with you all again – this time about Magic Arena!

Since this is the first week covering this new mode of gameplay, I want to talk more about the pros and cons of Arena itself before we move on to figure out how to best play the game on a budget.

Magic Arena, released back in September 2018, has quickly become the platform where the Magic players compete to become the very best in the world. Especially in 2020, where many events in real life have been postponed or canceled due to the pandemic, social distancing and online business have become even more important nowadays. Most Magic players are no longer able to go out and play paper Magic. Instead, they stay at home and play digital versions of the game.

MTGO used to be a big part of my life, and I invested lots of time and money into it. However, as time went on, I found it difficult to sustain my time and money investments in the game. I'll put it this way: it's not wise to put in so much focus in exchange for virtual items when the economy is affected by COVID-19, which is expected to cause the worst global recession since World War 2. So, I quit MTGO and started playing Arena this year.

First of all, Arena's model is free-to-play (FTP), although it does offer in-game purchases whereby you can choose to pay to speed up your collection progress. In Arena, it's fine to remain an FTP player – you will encounter a bunch of similar players like this in the game. Instead of winning prizes (i.e., tickets in MTGO), we earn gold and experience from wins to unlock rewards such as cards and packs. Players will only be receiving gold and experience for the first 15 wins daily, which means players cannot progress faster than everyone else by winning more than 15 games a day. Sounds fair in an FTP game model, right?

In Arena, there's no trading system like MTGO. In other words, your collection can only grow and its just a matter of time for players to collect everything they need. Many of you might ask, since there's no trading, why would Arena contents appear on QS? It's simple: we want to share ways to help you get the best returns out of the investment you're putting into the game. If you save $100 after reading articles here, that's an extra $100 in your pocket!

In every card game, having excess copies of a card past a playset is worthless unless you hope to generate value from it. In Arena, duplication protection is something important to be aware of in order to spend fewer resources while getting the same returns. Whenever you crack a pack on Arena, if you are about to open a rare or mythic that you already have, no matter from the same or a different set, the system will exchange it with another card of the same rarity. For example, if you have a playset of Fabled Passage from Throne of Eldraine and you happened to open the same card in M21 pack, you will get another rare insteaaad, until you eventually have playsets of all other rares.

Another feature of Arena that differs from MTGO is that players get wildcards of each rarity. Wildcards can be exchanged for any card of that particular rarity. When a player's vault progress meter reaches 100 percent, they get three uncommon wildcards, two rare wildcards, and one mythic wildcard. A very common strategy in Draft when one has no playables to choose from is to contribute more to one's vault progress by picking up uncommon chafe over common.

Players on Arena usually don't crack packs before they can guarantee full collections of at least all rares from the set in question. Note that the system only exchanges a card you owned with a card of the same rarity, meaning that if you have not collected all the mythics from the set, opening a rare card will not upgrade it to mythic! Instead, they turn into 20 gems (40 gems for duplicate mythics), which can be used to purchase various virtual items in the Arena store. In my future articles, I will compute the suggested amount of time to put into the game with the goal of collecting at least 98-percent of each set.

A ban is one of the most terrible things that can happen on MTGO. Why? Assume you are speculating that a certain card will be banned, say, Embercleave. So you sold off your sets of Embercleave before the B&R announcement, hoping to avoid losses. However, it turns out that Cleave is not banned and its online price went up by 3 tickets! Here, it's technically a loss of 12 tickets if we want to re-purchase a playset of the equipment.

Similar minor losses can happen the opposite way, where we fail to sell a card before B&R news. This is another nightmare scenario – without us even noticing it, the value of our collection might shrink over time to the competitive environment – we can lose a lot of money just from inaction!

None of this happens on Arena. If a card we own is banned, we get wildcards of the same rarity to replace it. If a really good card dodges a ban, it still costs the exact same one wildcard. How great is that? It means we don't need to think twice when we craft a card that we want to play!

The Arena team introduces new, fun formats from time to time, especially for FNM at-home events. Besides the normal formats such as Standard, Historic, and Limited, Arena also boasts: 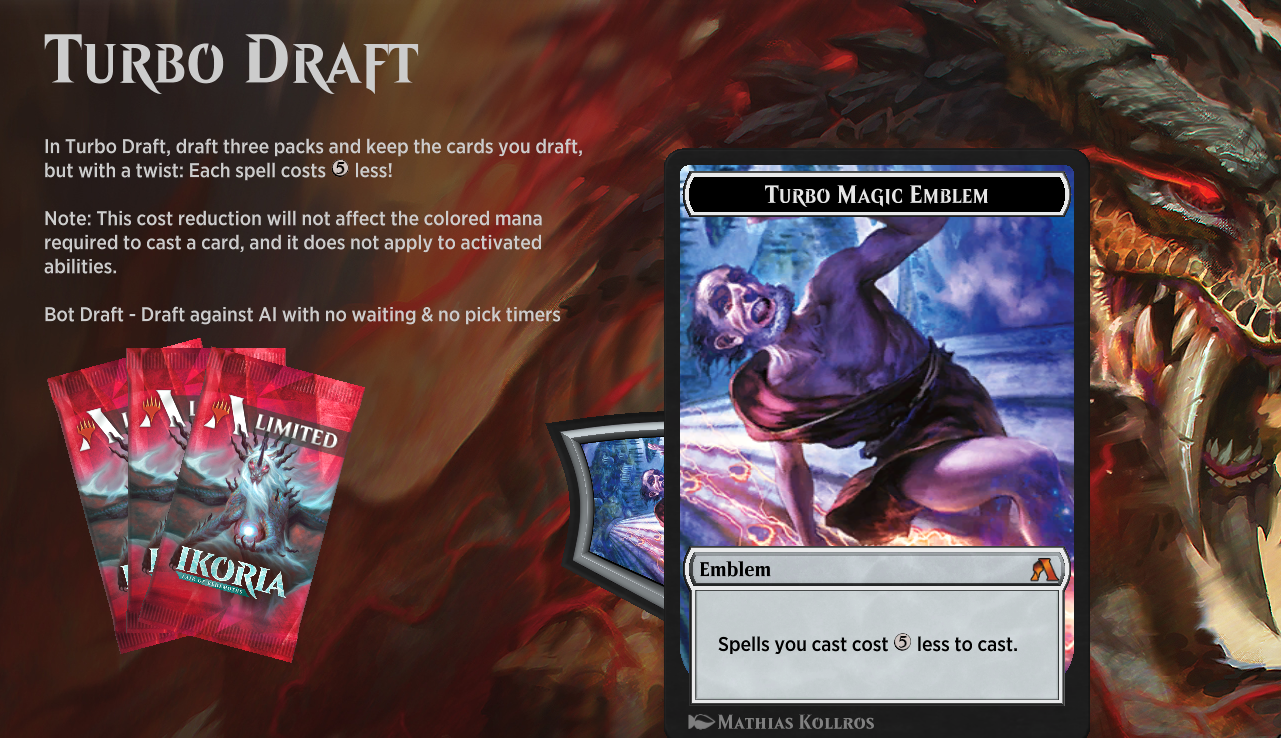 If you like Pioneer but you haven't had much chance to play, good news for you: WotC is constantly releasing sets which are Pioneer-legal into Magic Arena. Ideally, the Pioneer format will slowly but surely make its way to Arena.

Magic Arena saves me lots of money and time as a working adult, and I'm still able to have fun playing Magic! What else is more important than that as a Magic player?

Before I end this article, here are some Arena-related topics  items I'm planning to cover in the coming weeks:

Alright, that's all from me this week. Thanks for reading, and I'll see you again next week!