How’s everyone faring these wild Reserved List buyouts these days? Frankly, I’m baffled that the trend has extended to include unplayable cards from sets like Mirage, Alliances, and Ice Age. There were many odd, rarely-used Reserved List cards in those sets that are now being targeted on a daily basis. 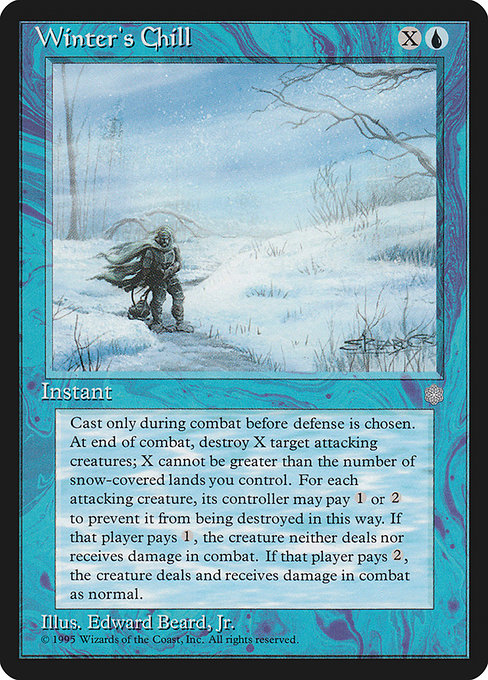 Unless someone is trying to create an amusing meme, given last week was a cold one in much of the Northern Hemisphere, I can’t honestly justify ever purchasing this card. Halls of Mist at least does something easily understood (though it’s still awful). Unless you’re telling me the return of snow in Kaldheim was enough to finally make this card noteworthy? I highly doubt it.

Just as the Reddit group Wall Street Bets is swarming around stocks of companies that are really suffering, it appears the MTG equivalent has circled around many awful cards.

I can’t predict how the stock market antics will end; part of me wants to see the trend push further to see how Wall Street and Washington, D.C. handles this (seemingly) legal activity. But I do feel equipped to predict what will happen with these Magic cards.

Before I dust off the crystal ball, first I want to make sure we distinguish between oddball cards with unique effects and cards that are far too complex or narrow to see legitimate play…ever. There’s a big difference.

If you want to speculate on a Reserved List card with a unique effect, I would never fault you. Especially if the copies you’re purchasing are near bulk. Hindsight is 20-20, and this card has already spiked, but I’ve mentioned Jabari's Influence in past articles. The card does something fairly unique in white: it steals creatures. It even does so at instant speed, no less! That’s one that is not interchangeable and merits a little speculation. 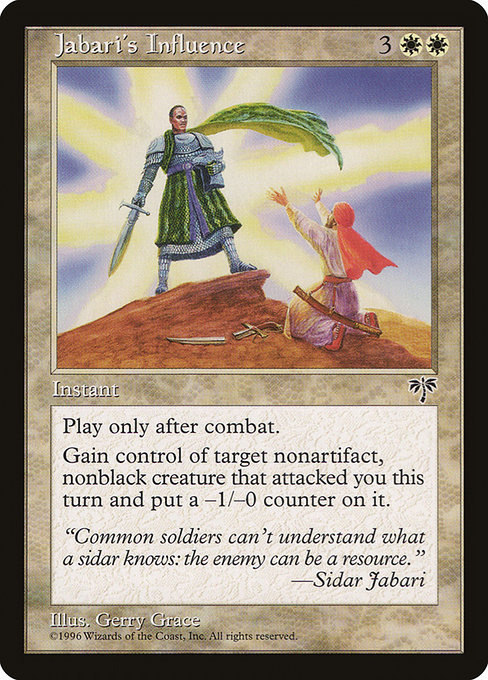 But I am far less impressed with a card like Aku Djinn. The downside on this card is sizable and requires a bunch of extra work for you to negate it. What’s more, five mana for a 5/6 trample isn’t an impressive set of stats anymore. 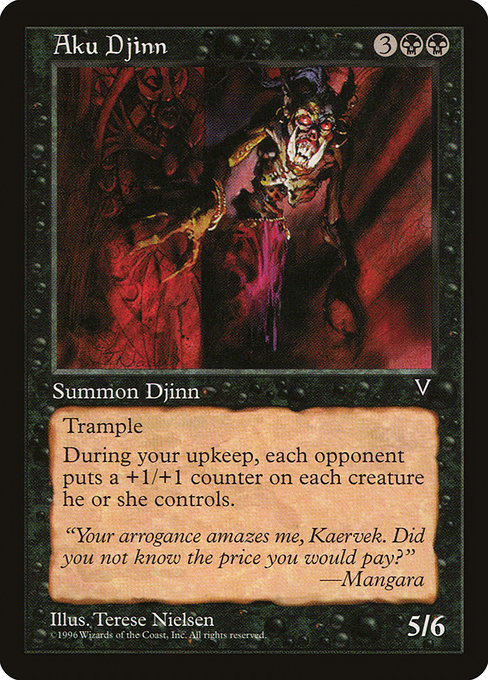 Bloodgift Demon, Shadowborn Demon, and even Abyssal Persecutor seem like far superior options nowadays. The only thing Aku Djinn has going for it is that it’s on the Reserved List.

Other cards I am rolling my eyes at include the aforementioned Winter's Chill, Pygmy Hippo, Weakstone and Mightstone, Prismatic Lace, Gustha's Scepter (at least this artifact costs 0…that counts for something), and Unfulfilled Desires. The list truly goes on and on, but these give you a feel for the kind of chaff I’m ignoring.

Every time we see a terrible card like this spike, we need to overcome the initial gut reaction of FOMO. I’ll admit a couple of these have made me frown—oh well, I’d rationalize, I guess I won’t be owning that card anytime soon. It’s important to acknowledge that we weren’t in the loop on a given buyout, but then quick remind ourselves that we will never need the given card to begin with. Especially not these horrendously bad cards from Magic’s distant past.

What and When to Buy

Let’s all hold hands and agree upfront that chasing any buyout of a bad Reserved List card does not require action. There’s no need to panic and purchase up overpriced copies of Aku Djinn just because the cheapest near mint copy on TCGplayer suddenly costs 300% more than it did the day before. This is the kind of reaction the speculators want you to have. The emotions must be overcome.

To offset this, I have two suggestions on how to react proactively and productively to these buyouts.

First, if you truly can’t shake the FOMO feeling, you could spend some energy researching the internet to see a) how thorough the buyout was, and b) if there are any lingering copies at their previous, near-bulk price.

Often times when a card initially pops on MTG Stocks, it’s because lightly played and near mint copies were bought out from TCGplayer. Moderately played and heavily played copies are usually left behind because buying them doesn’t impact the displayed price. If you truly won’t be able to sleep at night because you don’t own a Phyrexian Portal and it is bought out, you could settle for a played copy for your collection. Just be careful: doing this will feed right into the speculators’ plan. They expect other people to clean up HP/MP copies of the card in a panic, truly completing the buyout without having to spend money on the less collectible copies of the card. 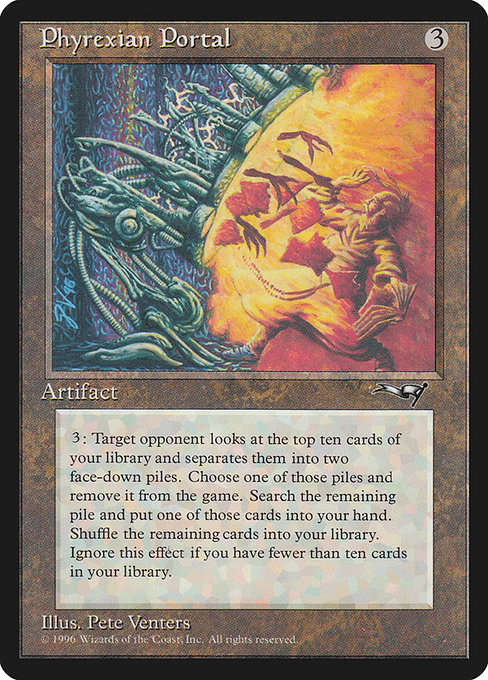 If you’re unsure about buying the card, you could also research how many copies are still in stock on other sites. I’ve found many times TCGplayer will be cleaned out, but dozens of copies of a card will remain posted on eBay, Star City Games, Card Kingdom, ABUGames, etc. TCGplayer is usually hit first, but you can rest assured it doesn’t mean the card is suddenly unobtainable.

I remember recently when Vesuvan Doppelganger spiked and I started experiencing some regret for now picking up more copies “when I had the chance.” 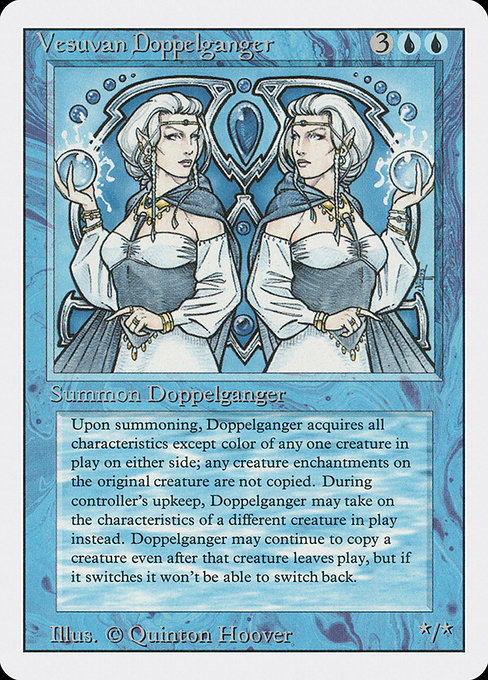 Then I noticed there were still plenty of copies for sale, especially if I was willing to accept heavily played condition. ABUGames literally has over 100 copies in stock; granted, they doubled their price since the initial spike, but it’s still reassuring to see. 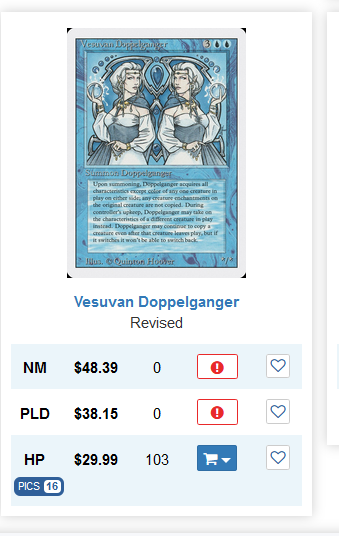 Does it hurt to suddenly have to pay twice as much as before? Of course. But I don’t have to actually pull the trigger on buying any. Sometimes it’s just reassuring to see that the buyout wasn’t complete and that there will be no difficulty obtaining a copy in the future should I want one. That’s often enough to calm my anxiety.

The second productive response is to think of other cards in a similar category that hasn’t spiked yet, that you may want for your collection. Once again I have the gift of hindsight, but if I saw Vesuvan Doppelganger spike, I could have considered other Revised Reserved List rares and picked a couple up just in case. Or maybe I could have bought Morphling, another five mana blue creature from Magic’s past, and bought a few of those. 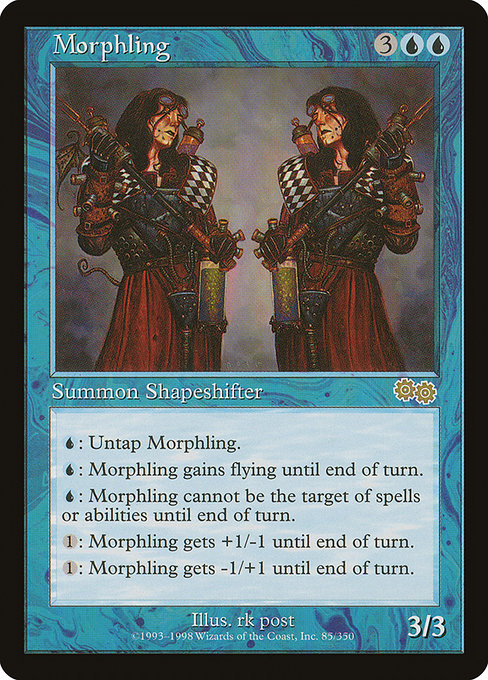 Spending money on cards that haven’t spiked (yet) seems like a far better value for my dollar versus chasing something on the rise. You could always browse TCGplayer for rares from a given set, sort by “best selling”, and look for Reserved List cards towards the top. Chances are these are the ones being targeted or prime candidates to be targeted, and you could grab your copies before the FOMO sets in.

For example, here are search results for Visions: 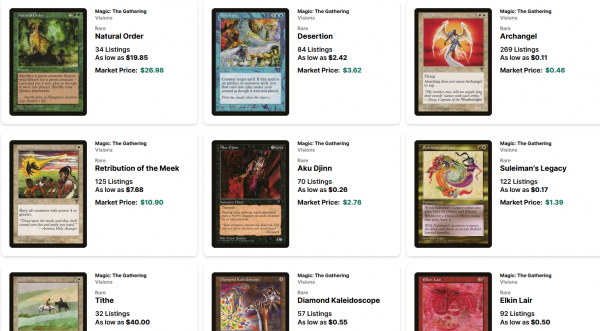 Natural Order and Desertion aren’t on the Reserved List, but they sure are playable. Perhaps those are worth keeping an eye on. Retribution of the Meek is already pricy, but it has a unique effect that has merit. If you want to go for true bulk, you could browse listings for Suleiman's Legacy and Elkin Lair, which appear to be selling reasonably well and still near bulk. 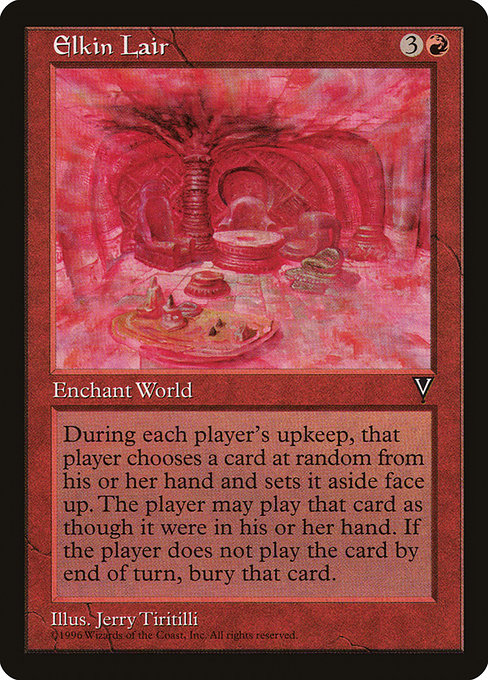 Everything you buy with this strategy may not suddenly spike to $10. But the practice will help you avoid the FOMO of purchasing overpriced cards that already spiked.

Oh, and this strategy may also help you uncover newly listed copies of a bad Reserved List card that already spiked. Diamond Kaleidoscope already saw some targeted buying. But that was a few days ago—maybe some stores will post their copies near the “old price” and you’ll be able to get that copy for your collection after all. (I checked: that $0.55 listing is for a damaged copy…I’ll leave it up to you whether or not you want to play the damaged lottery on this one.)

The dominoes continue to fall as new Reserved List cards spike on MTG Stocks each and every. Yesterday (Sunday) the list included Jabari's Influence, Nova Pentacle, and Unfulfilled Desires. Tomorrow it can be a smattering of other cards most players have never heard of.

The key to avoiding FOMO here is to think more productively about how you want to react to these movements. Most of them are forced, and many target cards you’d not likely ever put in a deck. In these cases, it’s critical to remind yourself of the silliness of these buyouts and to remain focused on cards you do want to play. That will help a great deal.

If you feel the urge to buy something in response to recent activity, I’d suggest looking for played copies and browsing other sites outside of TCGplayer for copies at the “old price”. Or, better yet, search for cards with unique effects that haven’t spiked yet and pick up a copy or two just in case. This could be a great way of spending some store credit at sites like Star City Games, Channel Fireball, Card Kingdom, and ABUGames.

Whatever you don’t, don’t panic and chase after these unplayable cards. Just like Gamestop and AMC stocks, most of these cards will drop back down in price again given enough time. They’re all the rage today, and serve a psychological purpose, but their fundamentals remain the same as before: awful. (Note: this isn’t stock advice. Please consult your financial advisors on how to invest in stocks.)

The terrible Reserved List cards dropped after their buyouts in 2018; I have no reason to believe they won’t do so again in 2021. The cards may climb a little higher this time, and their retracement may take a little longer. But in no universe do I believe Winter's Chill will be an $8 (or higher) card forever. These will come back down, and not just due to the Spring thaw either.