Just before Strixhaven dropped, we observed some intriguing developments among Modern's top decks in Jund Shadow and Omnath piles. While all the talk's been focused around Clever Lumimancer latelty, with the card showing promise (and also, floundering) depending on the shell, I'd like to remind us all that some players were breaking the mold before the set dropped with the likes of Slivers, Storm Herald, and a very splashy Scapeshift deck. Today, we'll look at all three off-the-wall strategies and figure how they might fare in the newly shaken-up metagame. 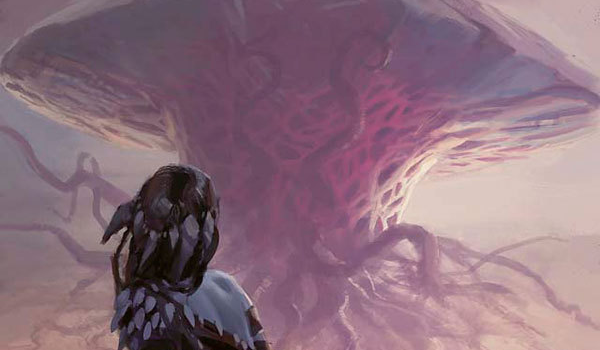 When we talk about tribal aggro in Modern, we're usually thinking of a couple specific decks: Humans, or keepers of the ground, and Spirits, which rule the skies. Then there's the less played tribal aggro decks, Eldrazi (RIP) and Merfolk, as well as Elemental. And then there's an even lower tier occupied solely by Slivers.

This most tribal of tribes has never been big in Modern, although it has experienced blips here and there. But for some reason, the deck put up multiple finishes in March, with each achieved by a different pilot.

The strength of Slivers lies with the abilities of its lords, which rather than ubiquitously pumping (something that's served Humans well) or ubiquitously pumping and granting Islandwalk (native to Merfolk), grant a plethora of different keywords and abilities to each Sliver on the battlefield. The numbers tell the whole story: any Sliver that's maxed offers the most important abilities, which here are +1/+1 (big surprise), flying and haste (a significant upgrade to Islandwalk), and Leeching Sliver's drain ability (a rather roundabout way of saying "+1/+1"). 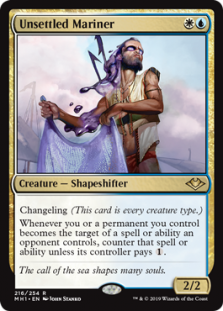 New to the tribe are Unsettled Mariner, coming in at the full four copies, and Realmwalker. Mariner's been seen in Merfolk, Humans, and Spirits, so it's no big surprise to see the changeling supporting this tribe. Slivers used to play Diffusion Sliver, which asks a higher tax of opponents at the cost of weaker stats and less relevance overall; Mariner also deals with spells targeting the player, including discard and direct damage, and that extra size really matters in a world of Lava Dart and Wrenn and Six. As for Realmwalker, this newer changeling offers the tribe a card advantage engine stapled to a body—look, Ma! No Collected Company!

Slivers also scored 3-1 in a preliminary last month with a different pilot, making me wonder if the squiggly little guys have legs. To their credit, Slivers can painlessly run Chalice of the Void out of the sideboard, which is huge against the Lumimancer decks and other prowess strains.

You've heard of Storm. But have you heard of... Storm Herald? You mean that creature that does something? Yes, that was also my reaction! So scroll over the card tag and feast your eyes! 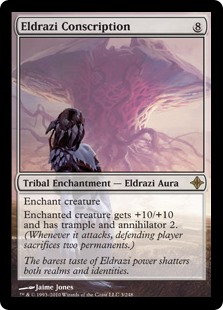 Storm Herald is a self-mill combo deck that aims to dump an "Enchantment Fatty" (Battle Mastery, Eldrazi Conscription, or Prodigious Growth) and then "reanimate" it with Storm Herald for a hefty, hasty swing. Clearly, the enchantments in the mix are worse than the available creature reanimation targets in Modern, such as Griselbrand and Emrakul, the Aeons Torn. So why play Herald over something like Goryo's Vengeance?

The idea is that Storm Herald itself offers one key degree of resilience: it can be Unearthed, meaning that lone sorcery in hand can kick-start the entire combo chain if both pieces are milled. And Unearth is a fine card in its own rite, working together with Jace, Vryn's Prodigy // Jace, Telepath Unbound to offer a card advantage package.

Beyond that neat trick, though, there's not much to this one-trick pony. Just another testament to "anything can happen in Modern!"

Scapeshift: With a Twist (or Three)

The opposite is true of the following deck, which mashes together a ton of different themes into one whopper of a list:

It's Scapeshift, but it's also Lands—both decks play Valakut win conditions, after all, and having Dryad in play does accelerate the Scapeshift clock. What else is in the deck? Almost nothing, which in turn enables Treasure Hunt! 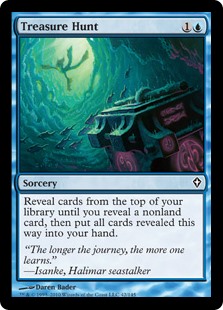 These types of combo decks can prove soft to disruption, a challenge Hunt meets head-on by offering pilots as little as one, but probably something more like three or four, cards off the top for a two-mana investment. Since many of these lands function as spells, that card advantage boost can keep Scapeshift's head above water when opponents are banking on setting up a clock and then countering or stripping the payoff spells. Previously, most similar builds would pack the deck full of multicolored costs and lean on Niv Mizzet to recoup card advantage; the problem with that line is that Niv itself occupied the same price point as most of the payoff spells, making it rather clunky once things got to the point where Scapeshift was casting real spells. Conversely, Hunt can be played as early as turn two, or before opponents get Cryptic Command online.

Also note the Bring to Light—while it can fish out Scapeshift as intended to end the game, should that option fail, it can also grab Valki (both halves!) for some good ol' cheaty fun. Granted, paying five for the walker is a lot less cheaty than paying three, but hey.

Modern's wild a-brewing over the new set, but let's not forget that it was just the same way a few weeks ago. Soon, we'll dive into Strixhaven's impact on MODO's deckbuilding coalition!