In 2021, I suspect nearly everyone has heard of Pokémon. Sure, everyone’s awareness of the franchise is going to vary greatly. Some may be intimately familiar with the card game, various Game Boy games, and cartoon series. Others may only have heard of Pikachu and not much else. When I was a kid, Pokémon was a cartoon and Game Boy game to be played by nerds. Nowadays, the franchise has gone mainstream.

Perhaps this is why Pokémon cards are sold out all over the place, and my local Meijer grocery limits Pokémon purchases on a per-customer basis. They don’t even put the products on their CCG shelves anymore—to purchase Pokémon cards, you need to ask an employee to get you your allocation from some hidden location. 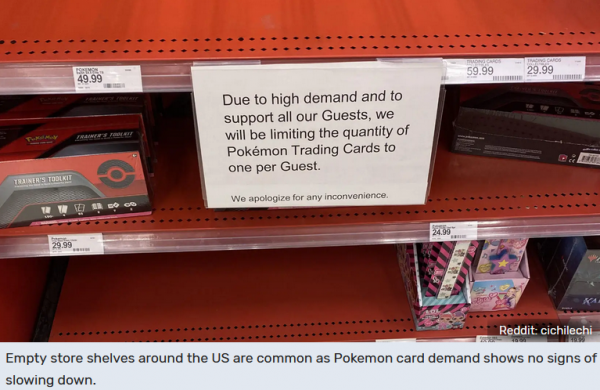 When I’m browsing the CCG section now, all I basically see on the shelves are Magic cards. Apparently, Magic cards aren’t selling as briskly and don’t demand the same protocols. But why is that?

Well for one, Magic, while a popular game, still doesn’t have the same broad reach and familiarity as Pokémon. But could this change? It’s possible, but not as easy as you’d think. Allow me to explain.

The Pharma Bro: An Anecdote

Back in 2016, Martin Shkreli, known colloquially as “Pharma Bro”, made a Reddit post that shook the Magic world.

"Hi everyone. I'm new to the game. I'm looking to acquire some rare cards. I am a collector of wine, art and other goods. Can someone give me some resources on collecting rare cards? Specifically I've been told black lotus cards are very valuable. Also has anyone had any insight on Hasbro's intention for the company?

Once this post went live, Twitter and Reddit replied en masse with attempts to help. Everyone wanted their fifteen minutes of fame, and share suggestions on which Magic cards to invest in. Martin proceeded to claim he had already purchased five Black Lotuses and was on the hunt for more.

Because of his infamy, many speculators and investors thought this could be a catalyst to help Magic make the leap into the mainstream, sending card prices much higher. Any such hopes did not last long, however. Martin had many legal issues to attend to, and he couldn’t maintain the trolling façade for very long. I haven’t even heard the guy’s name in the news since 2016. Perhaps that’s because he’s currently detained in a Federal Correctional Complex (aka prison), serving a seven-year term.

The hype was there, it was fleeting, and then it disappeared.

Last week, Magic finance once again broke into mainstream media via an exclusive article written by TMZ. The headline says it all:

It’s pretty clear the authors of this article are not intimately familiar with MTG finance. If they were, they probably wouldn’t have been so impressed that a person spent thousands on Magic cards…anyone who plays Vintage knows this feeling. Nowadays it’s fairly commonplace to see a four-figure Magic card, and Black Lotuses are pretty much cemented as five-figures in price.

That aside, it’s certainly impressive that a mainstream music artist is hanging around Magic card shops buying singles for decks. Post Malone has had multiple number one hits, and his Twitter following numbers 6.9 million. For comparison, the official Wizards of the Coast Magic: The Gathering Twitter account has 287.6 thousand, or roughly 4% of Post Malone’s. With this kind of following, Magic is surely to get broader exposure.

There are other famous people who are known to play Magic. Hunter Pence, an outfielder for the San Francisco Giants (Major League Baseball team) is one of the most well-known. As recently as a couple weeks ago, Hunter was playing Magic on Twitch for charity. 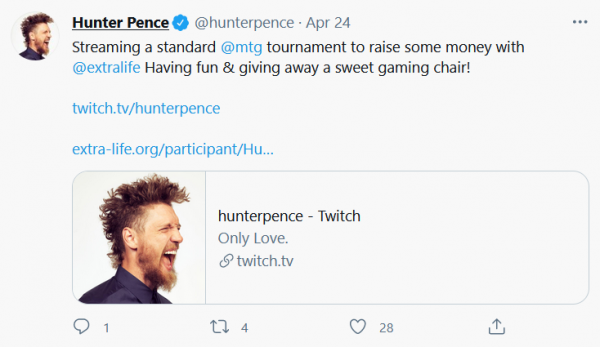 This will also surely increase visibility for Magic.

In all honesty, I don’t think Hunter Pence and Post Malone can make Magic go mainstream—not by themselves. The game is still simply too complicated and the game pieces are a bit too niche. Everyone recognizes Pokémon and many collectors are interested in the game’s cards even though they don’t play the game itself. Pikachu or Charizard cards are still widely recognizable even without any in-depth knowledge of the game.

In Magic, it’s not so straightforward…yet. Up until now, 99% of cards depict a fantasy world. With few exceptions (e.g. Arabian Nights, Walking Dead cards, My Little Pony cards), people outside of Magic simply won’t have heard of the names and places cited on cards. Sure, a card like Jace, the Mind Sculptor is iconic, but there’s no mainstream crossover for people unfamiliar with the card game to want a “Jace card” in the same way they’d chase after a “Pikachu card.”

But this is all about to change as Wizards of the Coast works on full crossover sets. In July 2021, Wizards will drop a Dungeons & Dragons crossover Magic set, called Dungeons & Dragons: Adventures in the Forgotten Realms. This set will contain classic D&D elements on Magic cards. So if there was a D&D character or theme that got its own Magic card, it could be an instance where people could want to collect certain cards without being interested in playing the game itself.

There will also be a Lord of the Rings-themed Magic set. Lord of the Rings has major reach given the success of its movies. But will it be enough to send Magic into the mainstream? I’m still skeptical.

What Will It Take?

You can sense my skepticism in the paragraphs above, right? Despite Post Malone’s posts, and Hunter Pence’s streaming, and full-blown crossover fantasy sets in Magic, I still don’t see the game going “mainstream” in the same way Pokémon…or even Chess…has gone. The game is just so complex and difficult to penetrate, and the game’s characters and imagery aren’t well-known and understood enough to make it a mainstream collectible à la Pokémon.

What would it take, in my opinion, to have Magic make it to mainstream? I believe a couple of major catalysts would be required for this to happen. 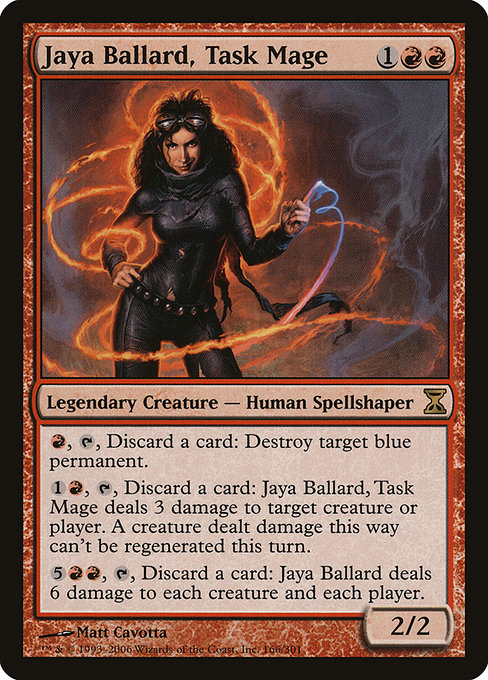 For instance, a hit miniseries on Netflix, Hulu, etc. would do the trick. The pandemic has already been a major boon to chess, but the popularity of The Queen’s Gambit on Netflix was a major factor in boosting chess’s popularity recently. A similarly popular show about Magic in any capacity—even if it was just a minor subtheme about the main character—would drive Magic’s popularity significantly. It’s similar with Dungeons & Dragons’ rise in popularity due to the show Stranger Things. Magic wouldn’t have to be the primary focus, just featured enough to spark interest in mainstream media.

Another route would be if famous people who enjoy the game started integrating it further into their daily social media outreach. A TMZ article about Post Malone buying Magic cards is certainly cool, but it’s going to be a flash in the pan for Magic. However, if Post Malone started playing regularly, maybe posted some pictures of himself playing other famous artists on social media, then the game would start to gain traction. In a facetious, more extreme circumstance, a Post Malone song about Black Lotus would drastically increase the world’s awareness of at least that card within the world of Magic. 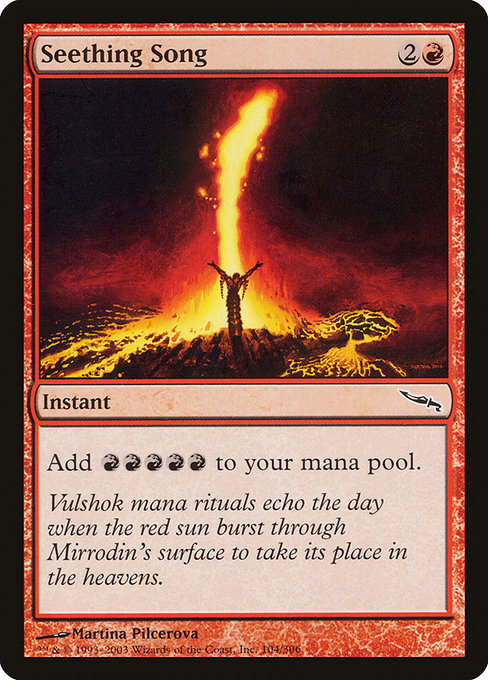 The other route I can think of is if Hasbro can take Magic, manipulate it somehow, and create a simpler, faster spinoff of the game that a broader audience can enjoy. They already tried this once with the Magic board game, and it was an utter failure (I remember seeing this game marked down significantly on clearance). I don’t know how Hasbro can achieve success with this approach, but their innovation with Monopoly tells me it’s possible. The game wouldn’t even have to feature complex Magic rules—even if it just featured some of the IP of the game, it could be enough to boost interest in collecting certain cards.

Magic cards have been soaring in value throughout this pandemic. I don’t think this is necessarily due to a sudden surge in demand (outside of FOMO). Rather, I think there are some major supply constraints because of the pandemic and the shutdown of large events. When the world reopens, a new equilibrium will be found and prices will settle.

One way Magic prices could surge again would be if the game went mainstream, akin to chess or Pokémon. It’s not there yet, and I don’t think recent events and sets on the horizon will be sufficient to get it there. As influential as Post Malone and Hunter Pence can be, they aren’t sufficiently integrated into the game’s social network.

Therefore, I believe it will require a greater catalyst for the card game to “make it” to the big times. A hit series on Netflix, more frequent involvement of famous players, and a successful spin-off game could be a few ways for Magic to explode into mainstream. But it’s not quite there yet.

Of course, given the fragility of Magic’s supply—particularly of cards from Magic’s earliest sets (1993-1994), we really don’t need a catalyst to send prices higher in the long term. And it doesn’t take a famous person to put a dent in the market. Anyone with deeper pockets and an appreciation for Magic can make waves from a financial perspective. If someone decided to spend a million bucks on Magic cards, they could really impact the market…the supply is that sparse, especially on Alpha and Beta cards.

Because of this, I don’t think a mainstream catalyst is even necessary to drive prices higher. It would accelerate such a move, but it’s not necessary. Prices will continue to climb on their own volition, as long as Magic maintains its current popularity. Any mainstream exposure is strictly upside.

3 thoughts on “How Could Magic Go Mainstream?”