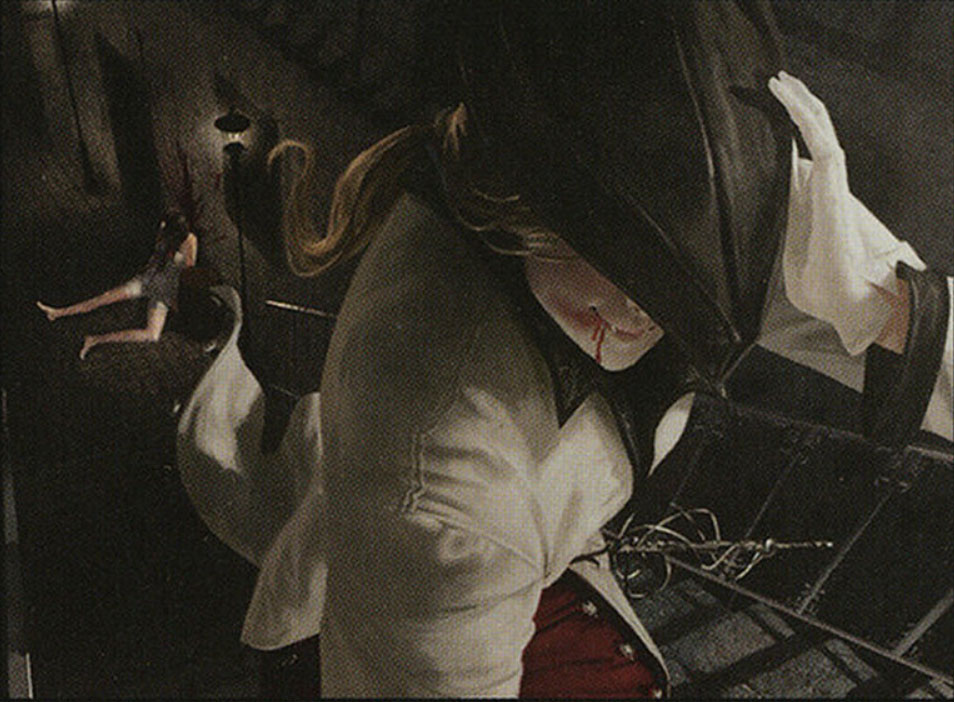 Last weekend I received some unfortunate news. I had sold a moderately played Alpha Nether Shadow on eBay, and the card arrived safely at the buyer’s home. But upon close inspection, the buyer observed something “off” about the card.

It turns out the corners appear clipped and uneven, and the buyer deemed the card a clipped Beta copy rather than a genuine Alpha copy. Now I’m not only out the sale price, but the card I bought is likely worth well below what I paid rather than well above. At least I’ll get the card back via return—maybe I just need to play it in a deck. Though, every time I see it I’ll have a sour taste in my mouth so I will probably just fire sell it as damaged Beta and see if I can get a taker. 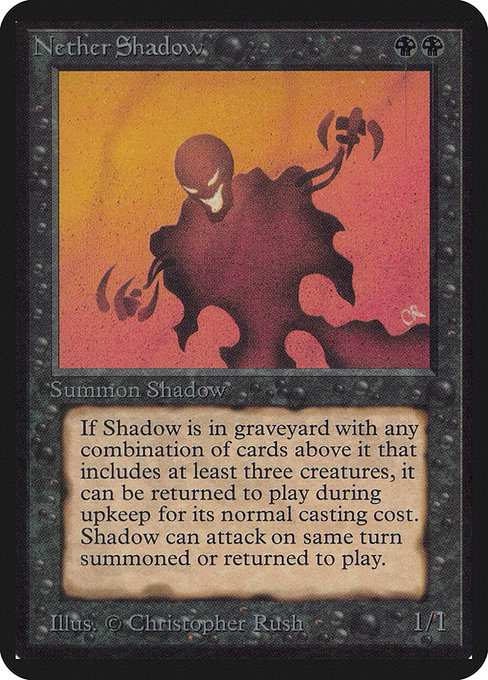 In an attempt to make lemonade from the lemons this situation just brought me, I’m going to touch upon a few watch-outs when dealing in Alpha cards, along with the necessary measures one should follow when dealing in these rare, high-end, and sometimes-counterfeited cards.

Learn from my painful experiences--they can be helpful cautionary tales with valuable insights to reapply. Clipped Beta cards exist and they’re more common than you may believe. In fact, this is now the second time I have ever been told a card I sold is clipped Beta and not Alpha. I’ve probably sold / buylisted a couple hundred Alpha cards, but even a counterfeit rate of 1 out of 200 feels extremely high. I’m not saying that 0.5% of every Alpha card that exists is clipped Beta—rather, I’m describing the frequency with which these show up.

What’s more, the two experiences I’ve had with clipped Beta were both purchases I made from major online sellers—not random individuals or TCGplayer. These are large-scale sellers who sent me the cards that were later identified (unfortunately not by me, but by prospective buyers) as clipped Beta. It’s not just the novice who falls for the trap.

The first time was a card I tried buylisting to ABUGames, and the store's buyer informed me of the questionable nature of the card. The second time was an eBay sale I made (the Nether Shadow). The buyer had a couple hundred feedback and appeared to deal in cards quite a bit, so I felt comfortable shipping them the card. But they immediately flagged the fact that the card was likely clipped Beta and not truly Alpha.

I’m not claiming to be an expert in this field. There are others who are die-hard Alpha collectors and have dedicated many hours of their life towards detecting fake Alpha cards from a field of real ones. I’m not here to educate you on every detail that differentiates Beta and Alpha nor do I have all the pictures (or cards) necessary to showcase all the differences.

But after my personal experiences dealing in these counterfeits, I have some ideas to share.

In some cases it’s easy to decipher the difference between Alpha and clipped Beta because the Alpha card is printed with different wording vs. the Beta counterpart. For example, Alpha Unsummon had a weird typo in the card’s text box that was corrected in Beta. So if you have an “Alpha” copy that doesn’t contain the typo, you can be absolutely sure it’s a fake. 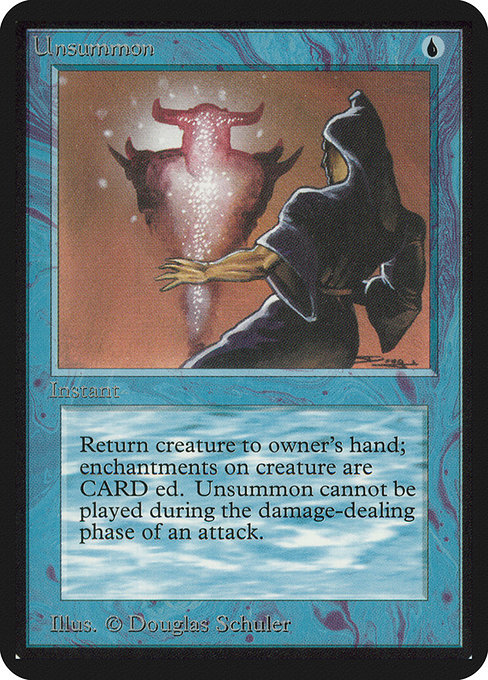 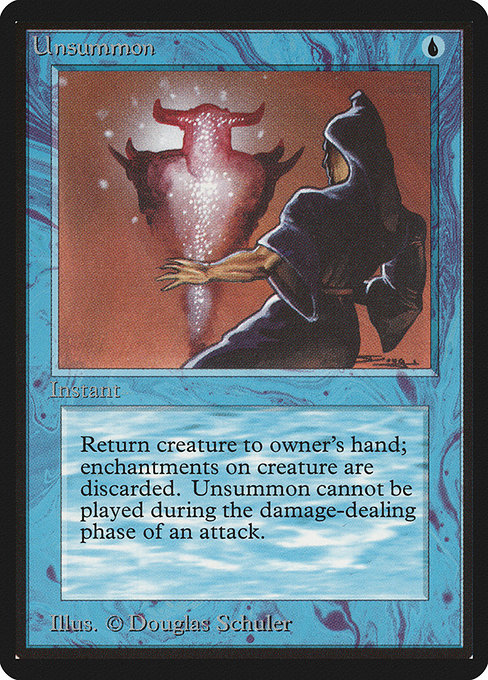 Another example (my favorite) is Cyclopean Tomb. The Alpha version contains a notorious misprint: no casting cost! This was of course fixed in time for the Beta printing. 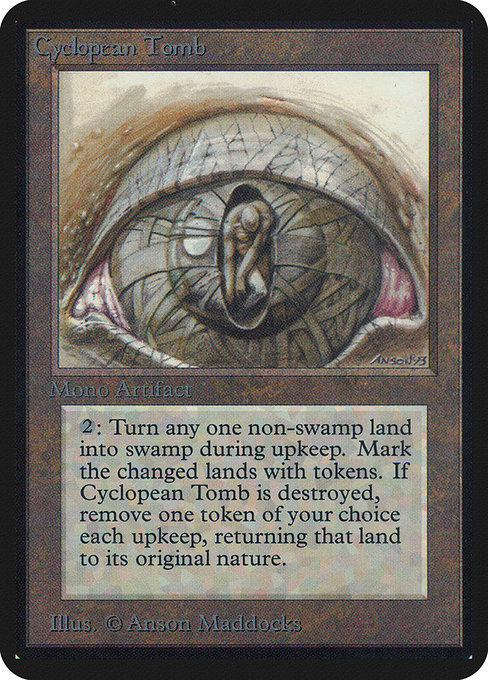 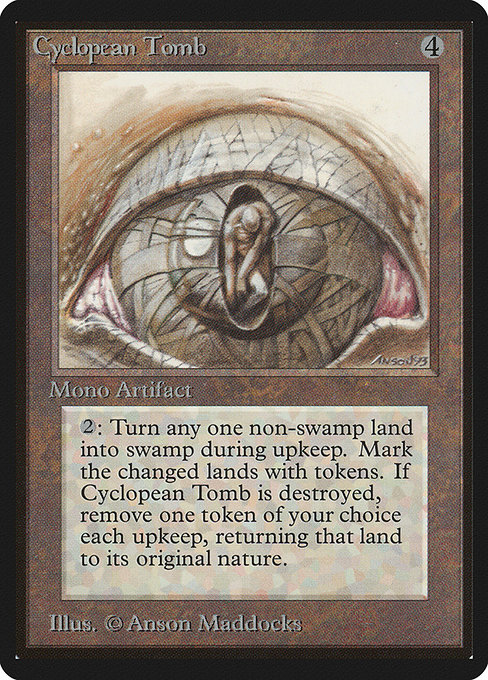 Unfortunately, a lot of the cards in Alpha and Beta have identical text. This means an alternative method needs to be identified in order to detect if a card is Alpha or clipped Beta.

At this point, it really comes down to scrutinizing the corners and looking for one of two distinct features. A genuine Alpha card’s corners will have a very tiny “lip” to them. Of course, it can be tricky to detect these corner features when a card has significant play wear on it. I did my best to capture the feature on an Alpha Gloom, below. You don’t need a loupe to see the feature I’m describing—the right reflection of light is sufficient. 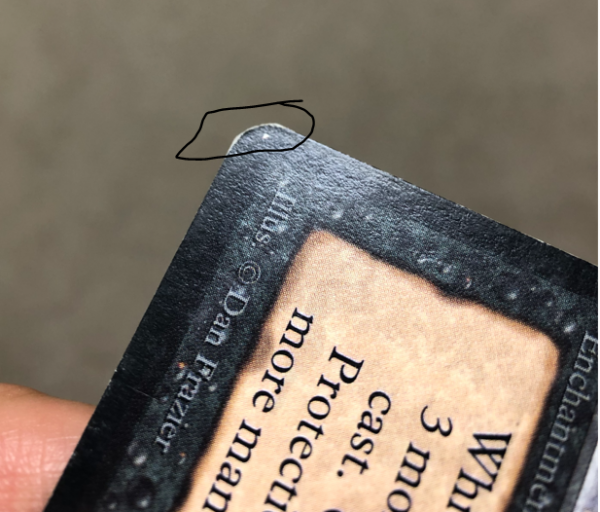 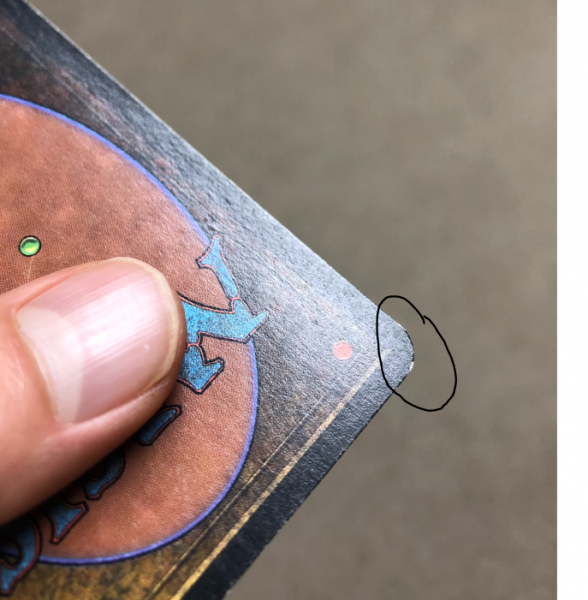 Notice how the corners come out of the plane just a tiny bit? This is one indication that a card is genuinely Alpha and not clipped Beta. One of the times I was bit by a clipped Beta was when I buylisted some Alpha cards to ABUGames, and the buyer there pointed out that one of the cards I sent them didn’t have these distinguishing features. That wasn’t enough to definitely claim the card as fake, but it was enough of a yellow flag that the buyer at ABUGames sent me the card back. That’s how I learned about this feature.

Now take a look at the corners of the Nether Shadow that is being returned to me. Observe how the corner looks jagged/damaged, and there is no lip feature. 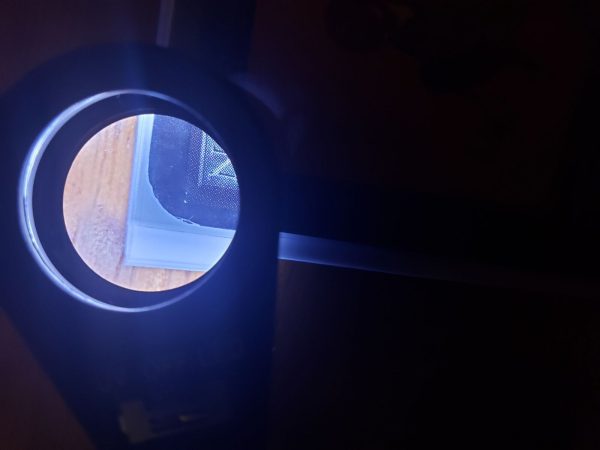 I would have liked a picture of the corner with reflected light as I took of my Gloom above. But I can understand why the buyer is asking to return this card. The corner is indeed suspicious—this is the first time someone returned a card to me for appearing to have clipped corners, and it likely means I’m going to be out $100’s on the failed sale. Not only that, but now I’ll have to sell the card as damaged Beta, plummeting its value dramatically. I’ll still probably sell it because I’d rather have whatever I can get for the than the card itself.

When it comes to identifying clipped Beta cards, the corners are really the easiest method for detection. But if the clipping is done professionally, that may not be enough to provide definitive proof that a card is genuinely Alpha or clipped Beta.

You could try weighing the card, but I don’t think the removal of the very tips of each corner would be easy to detect on a scale. The signal may be too small relative to the variation in card weights. The difference is likely going to be too small to really provide useful data.

Another strategy I’ve read about in the past is looking at the registration of the mana symbols in the card’s casting cost. Apparently where the symbol appears within its circle could be an indicator of the card’s true set. I’ve seen this strategy applied when trying to decipher whether a card is truly Alpha/Beta or if it’s a rebacked Collectors’ Edition card. But I remember reading somewhere that there may be differences between Alpha and Beta registrations as well. Granted, I’m more likely to drive myself crazy scrutinizing the mana costs than I am actually detecting definitive differences. Talk about subtle!

You could also try placing the questionable card within a stack of genuine Alpha cards, to see if it stands out. Try rubbing your finger along the corners, up and down the stack, and see if you can feel any card being “different”. If you can stare at a bunch of Alpha card corners/backs, and pick the questionable card out of the bunch every time for looking slightly off, then you may have cause for suspicion. This gets harder when cards are heavily played, but it could be a valuable approach when dealing in lightly played or near mint Alpha cards.

Of course, to do this you actually need to be lucky enough to own a stack of Alpha cards—this isn’t an inexpensive strategy to say the least.

There may be other ideas, but those are the only ones I’m aware of. I tried running a Google search for “Alpha vs. Beta” but all the top hits talk about the rounded corners of Alpha. Well, duh! Finding the difference between a legitimate Alpha card and a legitimate Beta card is trivial. Determining if a Beta card is clipped to look like Alpha is much harder.

Well, first and foremost you could purchase your Alpha cards only from large-scale vendors. But even this strategy isn’t fool-proof, as both times I’ve gotten burned were cards I purchased from seasoned sellers. This may help reduce rate of receiving bogus Alpha cards, but it won’t bring the failure rate down to absolute zero.

As a second step, you really need to scrutinize the card’s corners very closely immediately upon receipt. It’s not enough to simply trust that the seller would have caught a questionable Alpha card before shipping it to you. You need to look closely at the corners for signs of damage/clipping yourself—a jeweler’s loupe could help, but it’s probably not required. You can see the distinctive “lip” of a genuine Alpha card with the naked eye as long as you reflect the light upon it just right. I am going to start doing this from now on—it’s a practice I should have started years ago.

Lastly, if there’s any doubt and you’re purchasing the cards from a major retailer, you should return the card for a refund. It can be annoying to deal with returns, I get it. Also, some Alpha cards are so rare that you may not be able to find another copy at a reasonable price for some time. But given how prevalent clipped Beta can be, it’s just not worth the risk. The price differential between Alpha and Beta is huge, and it is not fun being the one holding the bag finding out a card you thought was Alpha was in fact Beta.

As Alpha cards become rarer and more valuable, they remain one of the best investments one can make in MTG finance. But they also bring some unique risk due to the popularity of clipping Beta cards “back in the day”. Proceeding with caution, scrutinizing corners closely, and not taking for granted a large seller is shipping you a genuine Alpha card is the best bit of advice I can provide—this is advice I will be following from now on to avoid getting burned again!

One thought on “Clipped Beta vs. Alpha: A Cautionary Tale”