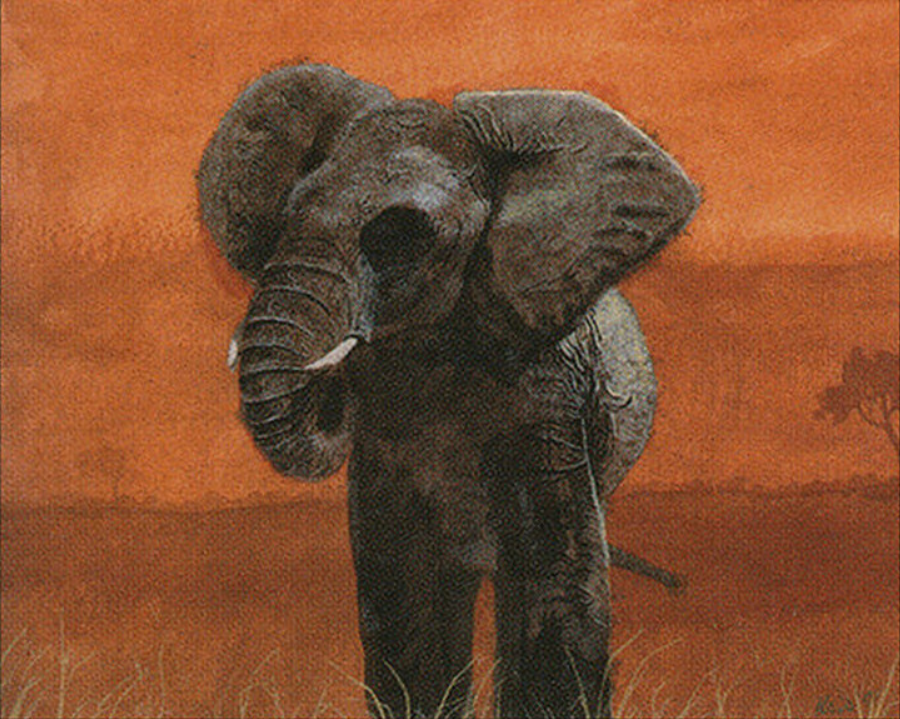 I hit the lottery once. Of course, I’m not talking about the Mega Millions or Powerball lotteries. Instead, I’m referring to that roll of the dice that is the “damaged” TCGplayer lottery, a concept I wrote about back in December 2020. You can read through it here.

I purchased a card as damaged from TCGplayer and not only did I find the “damage” as perfectly acceptable, I also believe the damage in question actually increases the value of the card tremendously—as in 80,000% more than what I paid. I shared this experience briefly in Twitter and Discord, but I never wrote about it here at Quiet Speculation…until now.

But first, some background.

The concept is simple. Often times, sellers will list a card on TCGplayer as “damaged” for an array of widely variable reasons. Without images, you never know what makes a card “damaged” in the eyes of the seller—it could be major inking around the edges, a significant shuffle crease, warping caused by water damage, a light tear, etc. The list of possibilities truly goes on and on.

Why would anyone want to purchase such cards? Well, some people don’t mind certain kinds of damage on their cards. I did a poll around the time of my article’s publishing, and it really highlights the fact that there are varying opinions on what is acceptable when it comes to damage.

Personally, I detest inking and water damage. The former makes re-selling the card more challenging (though not impossible, as you can see by the poll above). The later can hurt the integrity of the card, possibly even making it unplayable in a sleeve. However, extreme surface and edge wear doesn’t bother me nearly as much, along with the majority of my poll respondents.

A non-artist signature could be cool if someone iconic signed the card, such as Richard Garfield or Luis Scott-Vargas. However, one option I did not include in this poll was an artist’s signature on the card. While technically this does qualify the card as “damaged” on TCGplayer, nowadays I feel like a seller could list the card with pictures and possibly even command a premium depending on the artist. In some cases, the premium can be significant!

I don’t normally purchase damaged cards from TCGplayer. I don’t mind heavily played cards, because these I expect to be sleeve playable 99.99% of the time. When it comes to damaged cards, the issue with condition can be anything.

Back in February of this year, I made an innocuous purchase from TCGplayer.

Basically, I wanted a Legends Sylvan Paradise because the card’s artwork is, shall we say, risqué. To me, this meant the card was fairly interesting—one worth having in the Old School collection. 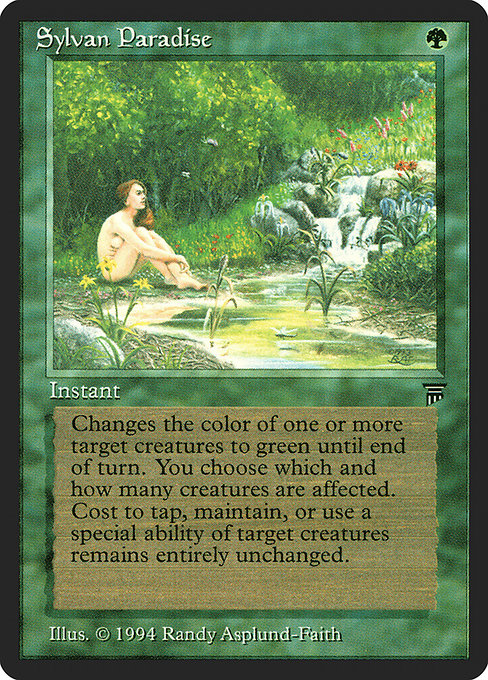 While I was browsing the seller’s wares, I noticed they had a fair price on a Legends Fallen Angel as well. So I grabbed that one. Then, while browsing their other Four Horsemen (Arabian Nights, Antiquities, Legends, The Dark) Magic cards, I noticed they had an Arabian Nights card listed for just $0.49. Short of being ripped in half, I figured it was worth a gamble—you really can’t find Arabian Nights cards for under a buck anymore, no matter what card it is or how heavily played it is.

The seller actually contacted me and told me there was an issue with the order—the Sylvan Paradise they had in stock was actually Italian Legends, not English. They issued a partial refund but sent me the Italian copy anyway, as an apology. Little did they know, they sent me something far more compensatory than a free Italian Sylvan Paradise.

The damaged War Elephant wasn’t heavily played at all. There was no creasing or water damage. Even better, the War Elephant version they sent me was the rarer light version (as compared to the dark version…the difference is in the casting cost’s vibrancy). But I realized I had something special when I noticed the signature on the bottom of the card.

It looks like the artist’s signature. You can make out a “K” at the beginning, a capital “B” for the last name and an ending “p”. Either this was the artist’s signature or it was a forgery. I took to Discord and Facebook to ask for the community’s help. I was thankful for their assistance, but I never would have expected what happened next.

Once I posted my picture, people started joking that I should use this card to start collecting a signed set of Arabian Nights. They quipped that I was off to a great start because I had the hardest artist signature to obtain from the set. After posting this card to the signed card Facebook group, I started getting PM’s asking if the card was for sale, even though I couldn’t confirm the signature’s authenticity.

It didn’t matter. There was enough evidence to believe the signature could be real, and that suddenly made the card special. How special? It turns out, the artist Kristen Bishop doesn’t sign this card all that often. I ran a Google search and came across a couple posts in various forums discussing the difficulty people are having with tracking down this signature.

For example, one MTG Salvation poster from 2011 stated, “The only person I’m sour on never locating is Kristen Bishop, because I adore the one single card she illustrated.”

Another person replied with a somewhat creepy solution. “I do have a signed War Elephant…But it’s from Chronicles…But I think I tracked Kristen down (that was REALLY hard). I am waiting for some US-Stamps to arrive and then I’ll try the address.”

A Magic Librarities poster from 2015 was browsing signed Arabian Nights cards and found someone selling a complete, signed set. They weren’t interested in the set, but they were “quite surprised as I never saw the War Elephant card signed by K. Bishop before…What’s strange to me is that he has answered me that he could get others War Elephant [SIC] signed, both versions, as he got them from a friend of K.B.”

With enough digging through old forum posts on the internet, you’ll find this common trend. This artist clearly chooses not to sign cards much, making her signature incredibly rare. And valuable.

How valuable? I was quoted a fairly wide range since this card doesn’t go up for sale on the market all that often. But the best I could deduce is that this card would sell for somewhere between $200 and $400. That’s a far cry from the $0.49 I paid for the “damaged” War Elephant! 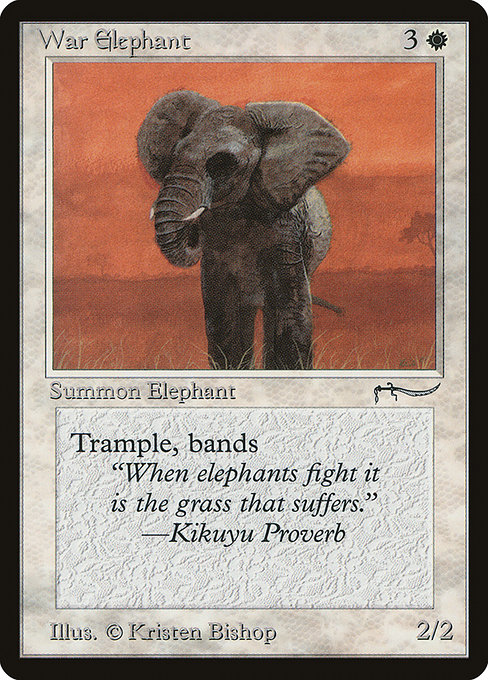 When I discovered how rare a signed War Elephant truly was, I reached out to the seller to let them know that they had unintentionally sent me a valuable card. But the seller actually had no interest. They replied that the card was signed, so they sold it as damaged. They couldn’t confirm the signature’s authenticity—maybe it’s a fake?

In addition to messaging the seller, I also went back to that seller’s store and purchased a bunch more of their older, “damaged” cards. Since they listed signed cards as “damaged”, perhaps I could score another cool piece for my collection. I ran back the damaged lottery once more, making the following purchase:

The cards arrived and I eagerly tore open the envelope hoping for a bunch more Old School signatures. Unfortunately, I came up completely empty. Not a single card from the order was signed. This time, all the damaged cards had actual damage—bends, creases, dents, and the like. I basically used the cards as freebies for folks who purchased from me in the following weeks.

I won the damaged lottery once, but I have to expect that it’s a once-in-a-lifetime kind of occurrence. I don’t think I’ll get so lucky ever again.

I’m not a major collector of signed cards. Of course, I know some of the iconic signatures are rare and valuable: Quinton Hoover and Christopher Rush both come to mind. But I never would have guessed that Kristen Bishop, someone who illustrated a single card back in the early 1990s, would have one of the rarest and most valuable signatures out there.

Someone actually sent me a private message on Discord with contact information for her. They said I could try emailing her to ask her if the signature is legitimate.

Something tells me this is a bad idea. Her signature is rare for a reason: she probably doesn’t want to be bothered by random collectors asking for her autograph. To be honest, that would creep me out—someone sending me a letter (meaning they had to research my address) asking for me to sign something. Since she’s not involved in Magic anymore, I can see why Kristen Bishop would ignore such requests.

Instead, I’ll just rest ignorantly content with my rarity. Most Magic cards are completely fungible. That is, they are easily interchanged and replaced. Even if I were to sell my Black Lotus, I could always purchase another one down the line. It may have different wear and play patterns, but it would effectively serve the same purpose in my collection.

This signed War Elephant is not so easily replaced. It truly stands out as a special part of my collection. It belongs alongside my signed artist proof Jaya Ballard, Task Mage and my double signed Shahrazad (signed by the artist Kaja Foglio and Richard Garfield, the inventory of Magic). These are cards that will remain in my collection for as long as I am into the game.

One thought on “Winning the Damaged Lottery”