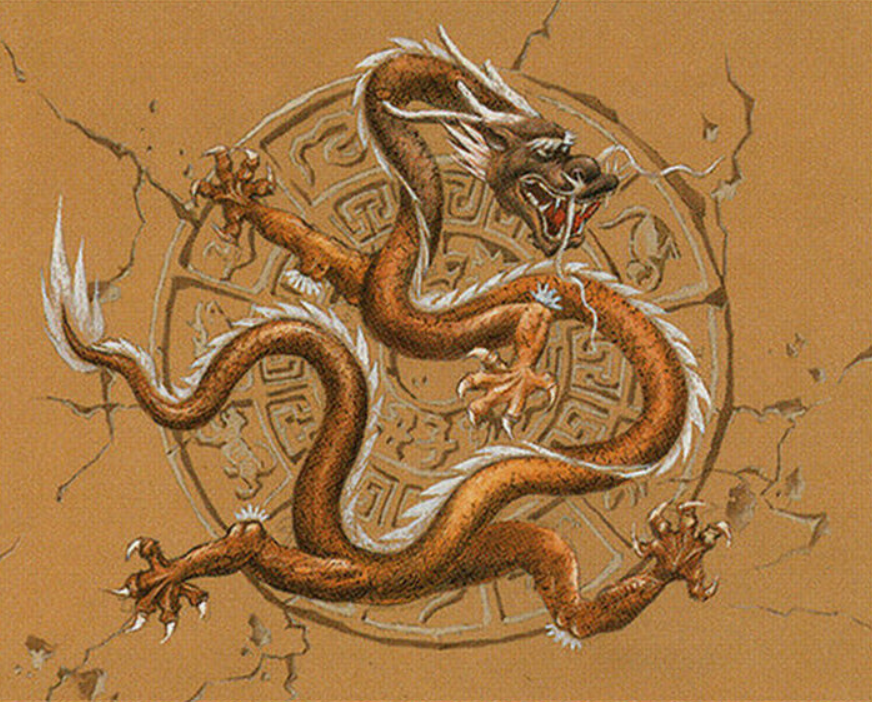 That’s the case for this week—Ryan V (@MtgandFitness) copied me on a tweet recently with a simple-sounding, yet challenging question.

This kind of question is right up my alley as it deals with older cards, a sector of the market I pay close attention to. But it goes beyond just old cards—there are actually a number of cards that are expensive and aren’t on the Reserved List. As such, they should be on everyone’s radar as a potential reprint risk. Let’s take a look at some of the candidates I considered in answering this question.

My First Reaction: The Most Valuable non-RL Card Is…

I overlooked the “oldest” qualifier in the question when I first read it. Therefore, I went to Card Kingdom’s website, sorted by value, and went through the list of cards until I found something that is not on the Reserved List and hasn’t been reprinted.

While it is a reprint itself, I made the [admittedly very loose] argument that the Japanese alt-art, Promotional Liliana, Dreadhorde General from War of the Spark was the most valuable non-Reserved List card. Technically, this version with this artwork hasn’t been reprinted since, so that was my qualifier when I shared this result. While you can argue it’s not old and it’s been reprinted, there can be little argument that this is the most valuable non-Reserved List card out there. At least, it’s the most valuable one that was printed in a normal, formally released set, non-misprint set (see how this can grow complex really quickly?).

From a finance standpoint, the price tag on this card makes it extremely vulnerable to reprint. I suppose the promotional printing of this card can never be reprinted—not with the same date stamp, at least. But if (when?) Wizards decides this card needs a reprint with this artwork in some custom product, expect this price to drop. Until then, however, I suppose the sky is the limit. I certainly have no plans to park any of my money in this card.

OK, so my first response was kind of cheating. It’s a reprint, it’s a promotional printing of a card, and it most definitely isn’t “old”. After being rightfully called out on my “cheese” answer, I took another shot at providing a more interesting answer.

That’s when it hit me – Portal: 3 Kingdoms cards would be great candidates for this question! The set came out in 1999, so the set is over 21 years old at this point; it is old enough to drink in the United States! In fact, it is so old that it could arguably have been included as part of WOTC’s reprint policy. The last set to be included in their policy was Urza’s Destiny, which came out a month after Portal: 3 Kingdoms.

Fortunately, Portal cards weren’t included in the Reserved List, so reprints of this set are fair game. To find the most valuable card in the set that hasn’t been reprinted, I simply sorted the set by price (high to low) and voila!

Hold on a second! Imperial Seal has been reprinted. It was a judge foil from 2016. That disqualifies it for the question as it was posed to me. Therefore, the winner must be…Zodiac Dragon!

The overcosted dragon creature card from Portal: 3 Kingdoms is old, has never been reprinted and isn’t on the Reserved List. It certainly is valuable, retailing north of $700. This is my official answer to the Twitter question.

From a finance standpoint, I’m neutral on holding some of these Portal: 3 Kingdoms cards for the long term. They aren’t on the Reserved List, and Wizards of the Coast has reprinted a number of these already. While Imperial Seal’s price didn’t seem to drop very much with a judge promo reprint, a more serious reprint could have more damaging effects.

And it’s hard to quantify the negative effects even a judge promo printing can have on a card. When Capture of Jingzhou was reprinted as a judge promo in 2017, the P3K printing definitely saw some pricing pressure. It took a couple years to recover, and eventually the card got back to its previous highs…but who knows how much higher it could have been, had it not been reprinted.

On the positive side, these cards are very difficult to reprint outside of a one-off thing, like judge promos. Wizards stopped printing cards that are designed off of real-life stories a long time ago, making it highly unlikely we see a new set like this one. I suppose some of these cards can show up in some sort of masters set, but this will happen gradually and likely one or two at a time.

With such a limited print run in English, I give folks the green light to invest here if they wish. I’d personally prefer something that is legitimately on the Reserved List, so I have WOTC’s assurance it won’t be reprinted. But these cards are rare, old, and difficult enough to reprint that they seem like a safe bet. Even when they have been reprinted in the past, they’ve recovered their price sufficiently to limit downside risk. The only challenge may be finding the market for this card—while it’s valuable, I can’t imagine you’d find collectors willing to pay $700 for a Zodiac Dragon every day of the week. An Underground Sea would be far more liquid and offers plenty of upside as well.

While Zodiac Dragon was my official answer to the Twitter question, I continued brainstorming ideas that could have also been reasonable responses.

Before I could respond again, Michael Caffrey of Tales of Adventure offered his best answer:

This is a solid one given its $80 retail price tag. I personally think Zodiac Dragon was a better answer, but the enchantment from Shadowmoor is over 13 years old already and is surprisingly expensive. 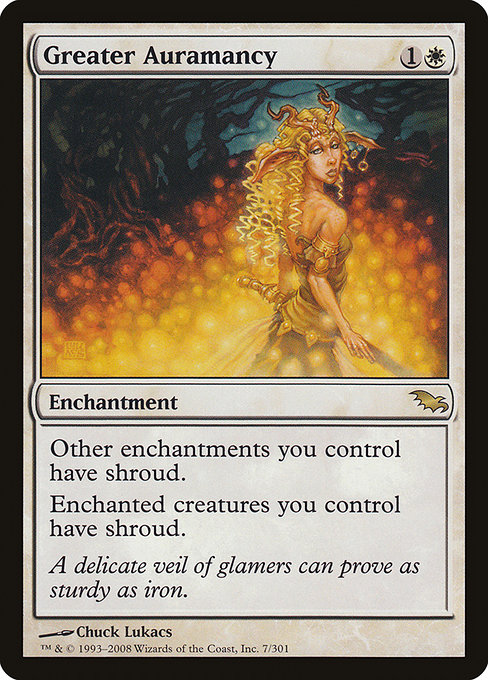 Another viable answer to the question was given to me by a Twitter/Discord friend of mine: Ydwen Efreet. 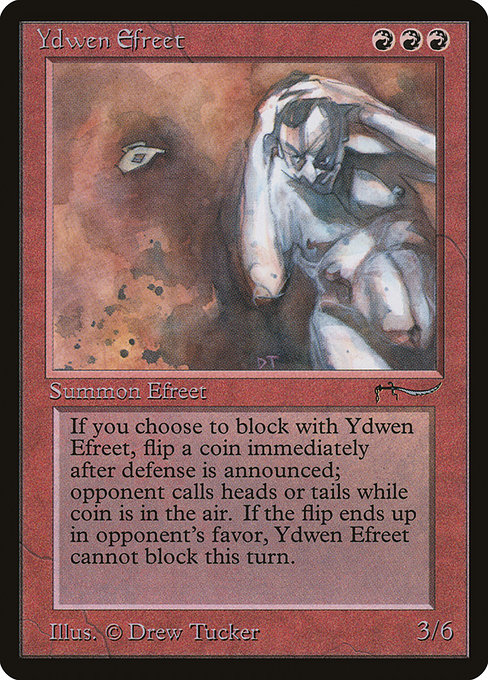 The red creature with an anagrammed name (“Wendy”) is a rare (U1?) from Arabian Nights, so it has every right to be on the Reserved List. But it isn’t. It also has never seen a reprint. I don’t know why, honestly, but the result is a $100 card. This definitely deserves an honorable mention.

Shevek_mtg (@ShevekMtg) chimed in with another interesting contender: Ice Storm. 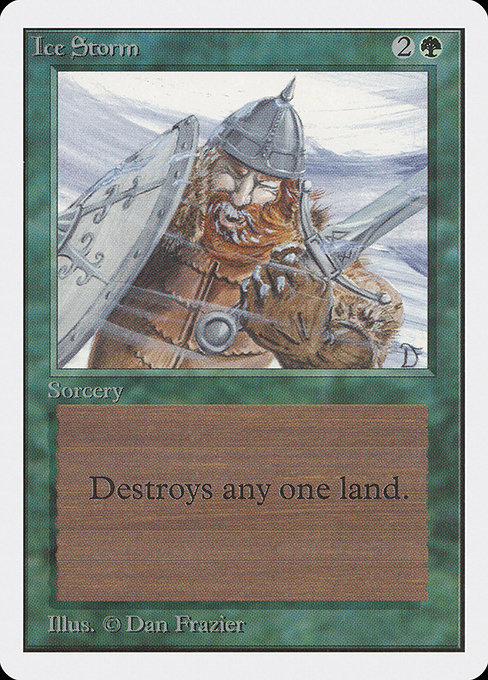 From a finance standpoint, I’d be nervous about holding these cards. I suppose if they dodged reprint for a decade or two already, there is precedent that suggests WOTC doesn’t plan on reprinting them. But if you’re going to park some money in Magic cards, I see little reason to buy an Ice Storm or a Ydwen Efreet over something comparably priced, comparably aged, and isn’t on the Reserved List. Put that money in a Singing Tree or a Two-Headed Giant of Foriys instead, and you’ll have the same upside without the reprint risk.

This question seemed really simple on its face, but it became a deep investigation into the history of Magic. It inspired me to research cards from a wide array of sets, ranging from Unlimited through War of the Spark! I looked at promotional cards, Portal cards, and everything in between. And my search wasn’t even close to exhaustive.

For example, I could have tried to find a card from Summer Edgar to provide as an answer. I’m not sure if there are any cards in that set that hasn’t been reprinted since, but there are certainly many valuable cards in the set that aren’t on the Reserved List. I could have also called out a specific misprint or unique card as a “cheese” answer.

I’m sure Shichiukujin Dragon would be more expensive than Zodiac Dragon. It’s also older, has never been reprinted, and isn’t on the Reserved List.

But this is probably cheating, right? I just mention this (along with the Richard Garfield proposal card, kid announcement card, etc.) so that people know I did at least consider them.

I’m sure there are other cards I overlooked, however. Do you have a legitimate submission to consider for Ryan V’s question? Feel free to submit them to me on Twitter (@sigfig8). I’m really happy he posed the question to me, and I encourage readers and followers to send me similar questions whenever they’d like. It just may be the inspiration for my next Quiet Speculation article!