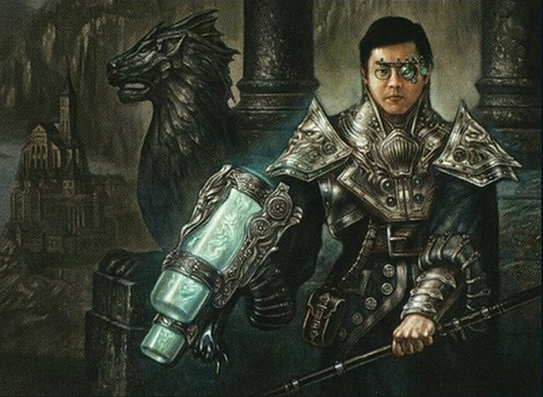 It shouldn’t come as a shock to readers that I’m a nostalgic guy. This is evidenced by my interest in Old School and collecting cards from Magic’s earliest years. Memories of sleeveless decks, cards blowing away during playground games, and complete and utter ignorance of card rarities bring a sense of joy.

Even though my engagement in Magic finance didn’t begin until much later—around 2009—my thirteen-ish-year pursuit of this hobby has aged sufficiently to grant me nostalgic pangs for days of yore. For those who have been around the Magic finance block as many times as I have, perhaps you’d like to re-live some of my favorite memories in Magic finance with me? A few things come to mind which still bring memories of excitement even now.

For those who are much newer to buying, selling, and trading Magic cards to save or make some money, perhaps these memories will inspire you in some way. If nothing else, it’ll be a reminder for folks as to how different things were even just a few years ago relative to my understanding of the pursuit today.

…Pro Tours really shook the Magic market? Back when there were major Pro Tours, played quarterly, in person, with live coverage, there was a thrill in the air in anticipation for the upcoming event. I knew the Pro Tour schedule sufficiently to remember to tune into live coverage of each event. When day one of the tournament would commence, on Friday, I would do everything possible to catch glimpses of the first rounds of Standard (or Modern) to see what cards the pros were tapping into for their innovative decks.

Since I work Monday through Friday, this often meant listening to coverage on my car ride to and from work and catching occasional glimpses of the action throughout the workday. It would be impossible for me to stream live Magic coverage all day at work, so I found an alternative way to remain abreast of all the latest developments: the Quiet Speculation Discord!

Years ago, a subset of the Quiet Speculation community would live in the Discord for that entire weekend, reporting on decklists, sharing results, and identifying pricing trends as soon as they began. There would even be folks on-the-ground at the event in person sharing additional insights whenever possible. The goal was to be the first to know about new tech, a new card making waves, and a new opportunity to make a buck from Magic.

There are numerous examples where this happened, but my absolute favorite was when Return to Ravnica first debuted, and Angel of Serenity surprised players at the Pro Tour. 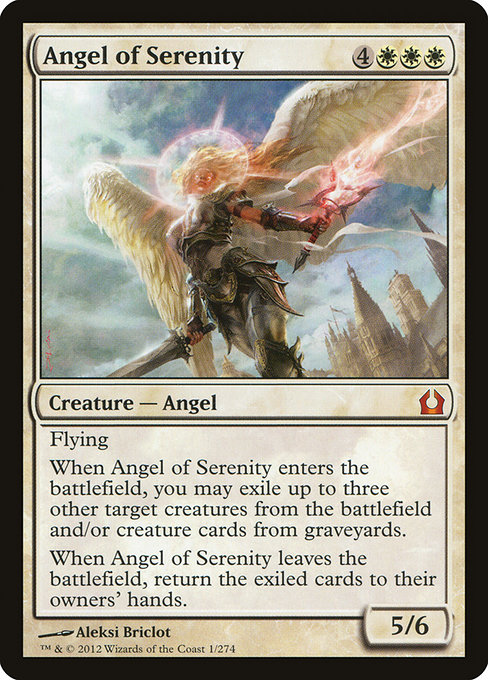 It was early 2013 when I saw rumblings of the card’s strength on Twitter, before the main event. I sent an email blast to the Quiet Speculation community with the suggestion that this card could make waves at the Pro Tour. Sure enough, the card showed up, made itself known in some games on live coverage, and the mythic rare spiked from a couple of bucks to $20 for a brief time. I still have the email acknowledging my bold call and contribution to the community.

This email really motivated me to engage even more with Magic, tracking Standard trends to stay ahead of the curve as much as possible.

This was a different time, though. Such activity may not be as fruitful today because…

…the most popular Standard non-foil rares would exceed $20 and mythic rares would approach $50? Going a little further back, there were some occasions when Standard cards would be even more expensive (*cough* Jace, the Mind Sculptor). But there seemed to be at least one $20 rare and one $50 mythic rare in Standard at any given time.

This made trying to guess which cards would be the chase rares and mythics during spoiler season quite the thrill. Some cards would come out with an excessive preorder price, eliminating any opportunity for profit. But once in a while, there would be something under the radar that people didn’t fully expect to dominate Standard, and there would be a chance to buy low and sell high.

Nowadays, you can still open a $50 card out of a booster pack. But the problem is, there are so many special and alternate printings of Standard cards now that you really need to get one of the special printings in order to achieve that level of value. Opening a regular, non-foil mythic rare just doesn’t have the same “wow” factor it used to.

For example, right now the most valuable card (regular printing) in Standard is The Meathook Massacre. 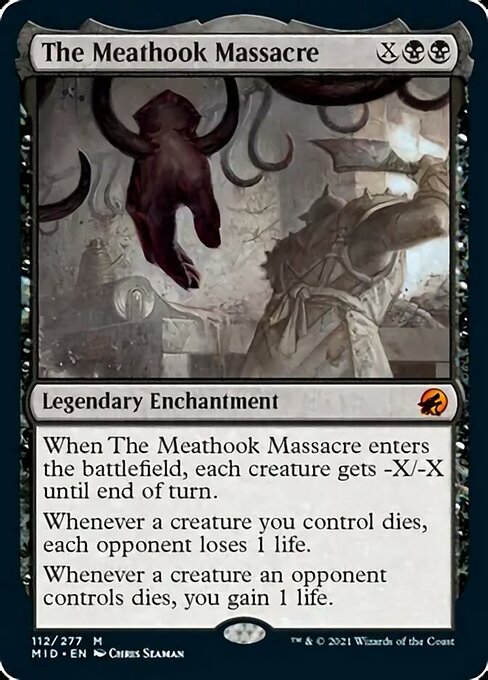 It looks like this is a $44 card, so you’re not too far off from that $50 threshold—that’s pretty consistent with days of the past. There are a couple of other mythics worth over $20 (though not many). The most valuable regular printing, Standard rare I can find is Shipwreck Marsh, worth about $9. 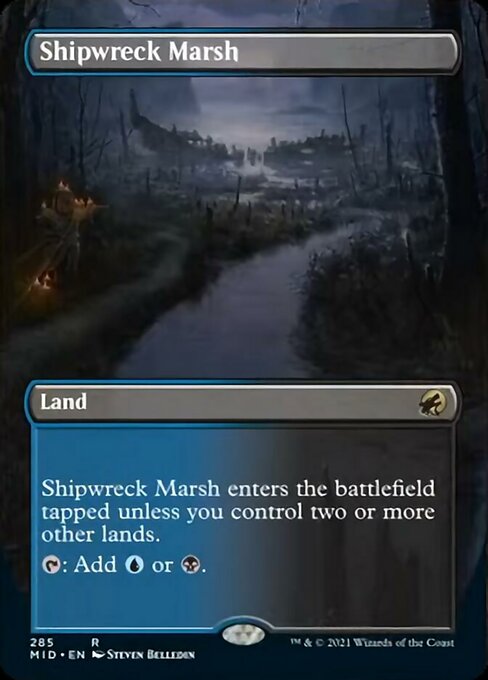 That seems pretty low for a “most valuable rare”, and I suspect it’s because Standard prices are hindered by all the special printings of new cards “absorbing” a set’s value. A given booster box of a new set can only be worth so much before people and stores will just crack them open for the singles, increasing supply and driving down values. By sprinkling in all sorts of alternate arts and foil versions of cards, it distributes a set’s value more widely across cards in the set, bringing down the average value of any given card.

Now it seems like you need to open a specific card or two, or else you’re losing money on that $4 booster pack.

Not to mention the limited upside makes speculating on Standard less interesting than it was in the “old days”.

…there were “seasons” that caused predictable fluctuation in card prices? There used to be these events called “Pro Tour Qualifiers”, or PTQs for short, that would earn winners invitations to the season’s next Pro Tour. These qualifiers would be a set format depending on which “season” you were in. Most frequently, those seasons were either Standard, Extended, Sealed, or Modern (later).

Depending on which season you were in, you would see a significant fluctuation in card prices. This was most relevant when it came time for either Extended or Modern PTQ seasons because these formats involved older cards from sets that weren’t opened as often anymore. This meant the supply was a little more inelastic, driving greater upside for prices.

The strategy was simple: a month before the next Extended season, you would start trading out your Standard cards for Extended playables like Dark Confidant and Lotus Bloom. When Shock Lands were in Extended but out of Standard, you’d see a bump in their prices as well. The same went for other popular Extended lands, such as Gemstone Mine or Flagstones of Trokair. 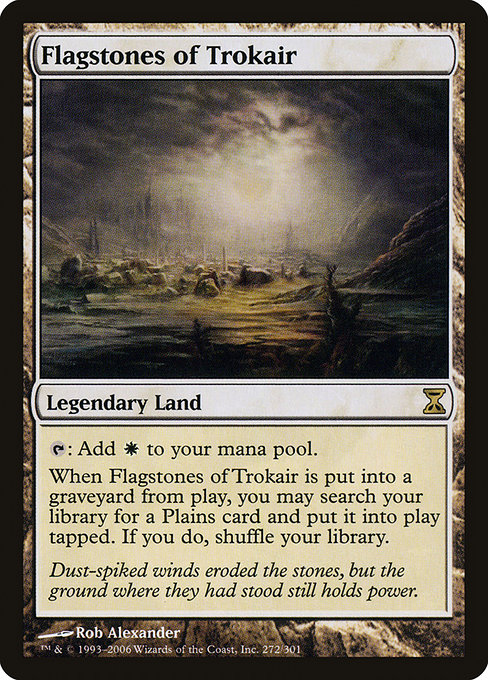 The trend was fairly reliable, and a common strategy in the Magic finance community. Because PTQ’s were widespread, played all over the world, and seasons lasted a few months, there would be a dependable jump in demand for these key cards. There was no sketchy manipulation involved, here. It was merely a matter of getting ahead of the curve and picking up cards before they became the talk of the town.

Then during the peak, about two-thirds through the PTQ Extended season, you’d cash out and move back into Standard (or better yet, Legacy) cards to bank your profits. Rinse and repeat.

As I wrote this article, I reminded myself how engaging and dynamic Magic finance was five to ten years ago. PTQ seasons, Pro Tours, and expensive Standard cards kept the hobby exciting. Because of these cyclical trends punctuated by Pro Tour events, it was always beneficial to remain engaged with a community with similar interests. This way, we would work together to find the best opportunities and most impactful trends.

There are other things I also long for from those days. For example, I remember when spoiler season was actually a big deal. Of course, seeing new cards is always exciting, but you used to only get spoilers for new sets about two weeks before the set came out. Each day, a few key cards would be spoiled on Wizards' website, and then that would be it until the next day.

Nowadays, the constant rolling of spoilers day and night from content creators throughout the community isn’t necessarily a bad thing. But by having spoilers come out nonstop, there’s a feeling of dilution for each individual spoiled card. Don’t like the last spoiler? Just wait a few minutes for the next one.

Oh, and it doesn’t help that there are way more products being released in a given year nowadays. This means we went away from four to five spoiler seasons a year to a seemingly nonstop flow of new products. It turns out there can be too much of a good thing when it comes to spoilers—the concept has become mundane to the point now where I don’t even follow the new cards anymore. There are simply too many to track.

I don’t expect we’ll ever go back to the days of yore, five to ten years ago, when Magic and particularly Magic finance looked very different. Therefore, I have adapted my engagement with the hobby to embrace the aspects of the game I like most, largely ignoring the rest. It’s not an ideal solution, I’ll grant you. But I still talk about and buy cards, 25 years after I started playing, so my strategy must be working. If I ever completely lose interest, that’ll be the day I cash out completely and move on to something different.

Hopefully, that day is far into the future.