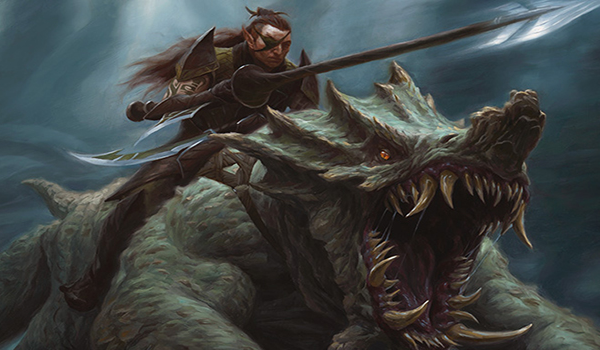 Welcome back for another installment of Adam Plays Magic. This week, we're crashing in with Mono-Green Stompy in Explorer. This archetype takes advantage of an all-green mana base to play otherwise hard-to-cast three drops like Steel Leaf Champion and Old-Growth Troll. The strength of these evasive stat beasts rests in their ability to come down on curve, which a typical deck of two or more colors will struggle to do. Since this devotion to green allows for high-powered cards other decks can't easily access, it's essentially splashing the same color for an added bonus!

One of the top incentives to play green in Explorer is access to Llanowar Elves, which is currently the only unconditional one-drop mana dork in the format. While cards like Jaspera Sentinel and Gilded Goose have the ability to tap for mana, Elves consistently does so without any stipulations. Even though it doesn't fix for colors the way the other dorks do, Elves is the best at ensuring access to the payoffs described above.

Notably, Elves pushes up the clock and enables its controller to deploy threats while the opponent is futzing with their early mana. There's even the option to next-level them by playing a two drop like Werewolf Pack Leader to dodge Censor.

But the glue that holds the deck together is Collected Company. This spell is the deck's primary form of card advantage and the only instant-speed play in its arsenal. Company can deploy multiple bodies after a board wipe, accelerate a clock even further, or generate surprise blockers as a combat trick. Company is unquestionably a versatile powerhouse.

Another element that I've been impressed with has been Kraul Harpooner, which typically spikes commonly-played flying threats like Ledger Shredder and sometimes Raffiene, Scheming Seer and live to tell the tale. At its base level, it's still a 3/2 for two mana that pairs well with Pack Leader to trigger pack tactics if it lives, or grow Scavenging Ooze if it trades with an opposing creature.

While a much smaller component to the deck, I love the flexible utility lands in the mana base. Boseiju, Who Endures is a free include that can kill creature lands and pesky token makers like Fable of the Mirror Breaker and Oni-Cult Anvil. Hashep Oasis often pushes through the final points of damage and Lair of the Hydra is excellent flood protection. All of these lands tapping for colored mana and coming in untapped is a lot of added value for virtually zero cost.

A deck like Mono-Green doesn't have much agency over what's going on. There aren't counterspells or reliable card draw engines. The pilot needs to hope the opponent doesn't just "have it" at all times. Sometimes that plan works out and you smash them before their plan comes together. Sometimes Greasefang, Okiba Boss sends a flying bus (Parhelion II) filled with angels at your face on turn three.

The deck also runs the risk of some clunky draws. A hand full of three-drops is great with Llanowar Elves, but if the dork dies, good luck finding the third land and playing one spell per turn for the rest of the game.

2 Boseiju, Who Endures
17 Forest
1 Hashep Oasis
3 Lair of the Hydra

Overall, I think Mono-Green is a solid tier two contender in the format, and it's great at punishing anyone that stumbles or is a bit too slow out of the gate. Games tend to be over pretty fast, making it a great choice to grind the Arena ladder.

The sideboard is surprisingly rich with options for an archetype with minimal spread on the color pie as well. Tamiyo's Safekeeping is a versatile spell that can punish removal heavy decks or board wipes. Shifting Ceratops is lights out against the Mono-Blue Spirits deck that's been gaining traction and is a great way to punish counterspells. The Great Henge outgrinds midrange decks like RB while getting a hefty discount from most of the deck's creatures.

And that's a wrap on this week's Adam Plays Magic! Don't forget to drop a like on the video and leave a comment letting me know what you want to see for next week. If you have any questions, as always, shoot me a message on Twitter at @AdamECohen. I'll catch you all next time.