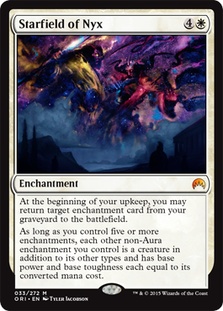 Adam gives a run down on one of the most powerful Magic Origins spoilers yet, Woodland Bellower, and looks at cards that may get a bump if they become go-to tutor targets.

Weary of the rise of Collected Company decks? Ryan has you covered. Find out the best ways to keep up with the new green machine!

Mike Lanigan looks at the leading contenders in the brand new Khans Standard. You can expect to face off against these decks in the early weeks, so don’t come unprepared.

Mike Lanigan tackles spoilers from Khans of Tarkir, focusing on the Ascendancy cycle. While these cards don’t fit perfectly into existing decks, they show great promise for anyone willing to build around them.