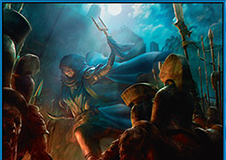 This is as close to an Inspired effect I care about. Pain Seer got a lot more hype and went nowhere (so far (?)) so I don’t expect this to presell for more than a buck or two. This might be worth doing something “cute” with like using it with Springleaf Drum but the effect […]

Ryan delves into the spoiler in search of new gems.