Adam thinks casual play will dominate Magic: The Gathering – Tactics. See what he has to say in this short breakdown of his experience before tomorrow’s release! 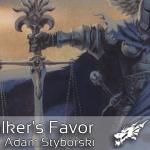 With the Insider update hot off the server, Adam explains why even the most relaxed of players may benefit from checking in.

Commander has changed, and for the better! If you haven’t heard the news, or want a little taste speculation, join in!

Sometimes simplicity is simply better because it’s simple. That is, there mere essence of something can be tantalizingly more satisfying than more stuff. Complexity is, after all, the greatest threat to Magic there is. While it won’t surprise many of you this past weekend was Worlds 2010, the ultimate end to the entire year’s worth […]

The speculation was rampant. The suggestions, and their reasoning behind them, were varied. And ultimately many of us were correct in some ways but all missed the big surprise from behind the scenes. Magic: The Gathering Commander decks are coming and I could not be more excited. You see as an avid advocate for the […]

Welcome to the new QuietSpeculation.com format! There are a lot of changes but, fortunately, I’m not on the hook for all of them. What I am here for falls under two functions: Editor for all of the casual and fun-focused articles, which you’ll find tagged under “Timmy” Writer of a weekly article about casual and […]