Greetings! My name is Jeff Corder and this is my first Magic related article.

Value is a very broad topic. My intention here isn’t to cover everything (which would be impossible, even for me!) but rather to cover some of the personal situations that I feel are worthy of your attention and consideration.

What is value? How should a person go about valuing an object? Is that different than when valuing a Magic card?

The value of any object is relative and subjective. A seasoned economist can likely talk at length about how the price of iron in South America is fluctuating and why that affects everything you buy. Those examples are not what I would consider beneficial for us: people who play, and trade, Magic cards.

Milk, on the other hand is a great example for us to examine fluctuating values. (I’ll come back to Magic in a second. Stay with me!) So, let’s talk about milk. Milk is an item in constant demand, as it is a consumable item with a limited shelf life (and totally delicious!).

In fact, yesterday I realized I didn’t have any milk in my refrigerator. I had a coupon for milk that gave me a $.35 discount. When I got to the store I found that the milk I wanted was on sale.

What is the value of this milk?

Clearly I’m willing to pay $3.80, as that’s normally how much I buy milk at. But is that the value of the milk?

The store is willing to sell me the milk at $.35 less than the normal price in exchange for a coupon. So is the value of the milk $3.45?

Then they reduce the price by an additional $.45. 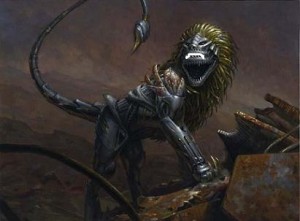 That isn’t the case, though. Value and price are separate things. Even if the price of milk stays consistent, my value of milk changes all the time. Maybe I really want some chocolate milk, or perhaps I want to use the milk to cook something, so my value goes up. Or maybe I have two full gallons of milk at home and the value of more milk is close to zero.

That’s also a good clue to help us realize that just because sometimes I can get milk for 2.99 doesn’t lower the value of the milk. The value I give to the milk didn’t change yesterday as I bought milk, only the price I paid changed.

We can also see these forces of fluctuating value at work when we look at prices of Magic cards.

We have access to websites like Star City Games and Channel Fireball who sell massive amounts of cards to end users.

These stores set prices based on speculation and knowledge of the current formats and pure guesses at what other people value cards at.

Just because some website says a card is worth $20 today, that doesn’t mean that the value of the card for all people is $20. If Star City Games or Channel Fireball decides they aren’t selling enough of that card they will decrease the price until it matches the value given to it by end users. That $20 card could drop to $10 the next day, then $5 the day after that.

Is the card really worth only one fourth what it was two days ago?

The value of the card didn’t change for the majority of customers. Star City simply lowered the price until they found a sell price. This illustrates a very useful point:

Card sellers are not value setters.

Let me say that again.

Card sellers are not value setters.

You, as an individual, are a value setter for any cards that you may be interested in.

Don’t get me wrong. Knowing what the big online card sellers value cards at is very good information to have, as it helps you value cards you don’t have any experience with. Just don’t let it run your trades for you!

The main problem with any one person assigning value to an object is that value is subjective. Hunches, emotional attachment, top 8 deck lists, pro level player recommendation, usefulness in your local metagame, the list goes on. All of these factors play a role in determining the value of a card for a single person.

My friend Wes was trading with one of the kids (we’ll call him Jim) at our local store. Jim is about 15 years old and has been playing at the store for several months at this point.

Wes found a foil Vengevine in the kid’s binder and asked if it was for trade.

Jim said yes so Wes pulled it out and asked Jim to find some stuff to trade for it.

Jim pulled out a promo Emrakul, the Aeons Torn and asked “Is this OK?”

I remember Wes looking at Jim for a moment, and saying “Sure.” Jim closed the binder, thinking the deal was done.

Let’s pause here for a moment. Wes could have completed the trade and both parties would have been perfectly happy.

From Jim’s perspective he got this big flashy card that if he casts it he’s almost sure to win the game. Vengevine doesn’t do that. For Jim, Vengevine isn’t useful.

Instead, Wes says, “You can have more than just that, man. The Vengevine is worth like 70 bucks.”

Jim agreed to take some more and went back to Wes’s binder looking for other cards.

Jim felt bad for taking more cards, though. Even after Wes explained that a foil Vengevine was worth more than $70 online the kid was still hesitant to take more because he felt guilty. Jim felt he had already received equal value with the Emrakul, why would he need more? Eventually Jim said that was enough and he was happy with what Wes had pulled out for him. 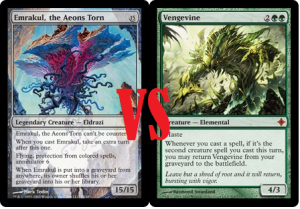 When all was said and done the pile that Wes was trading to Jim was worth about $30 on eBay, with the foil Vengevine being worth about $70.

Yet Jim still felt guilty about taking so many cards.

Wes also felt guilty for making so much profit off of Jim. He felt more like he was a dealer during the trade, rather than trading value for value. Jim didn’t see it that way. It may seem strange, but they both felt like they were ripping the other one off.

Why does the general Magic population assume that everyone should always place the same value on a card? Cards are worth different amounts to different people at different times.

I have a friend that loves foil cards. If you were to see him trying to trade it’s obvious that, for him, the value of any foil card is greater than the value of any card you might trade him. He’ll often make trades that are lopsided just to get the foil card he wants. Trying to get foil cards away from him is even worse. He always expects more value out of a foil card than other people do.

This friend once traded away a normal Elspeth, Knight Errant and $40 for a foil version. He could have waited and bought one online at the time for about $60. When he saw that foil Elspeth, though, his personal value for the card jumped high enough to offer cash and a normal one on the spot.

The zinger is that he was as happy as could be with the new card, and his trading partner, who didn’t care about foils, was just as happy.

We have to start educating people about the economics of trading. We can’t stop there, though, we also have to educate about the psychological aspects of trading. We have to make a very conscious effort to help people understand that the value and price of cards fluctuate. Not just from time passing, but also from the person you’re trading with.

Emotions can certainly run high when trading. It’s not all just about the money!

Take me, for example. The very first pack of Magic I ever opened was a 7th Edition booster. The last card in that booster was a foil Birds of Paradise. For those that didn’t play at the time, Birds of Paradise was quite the money card. A foil one could eBay for more than $100.

I put this card in a special case and usually left it at home. This card colored my first several months of playing Magic. Being younger, and stupider, I would sometimes bring it with me to my play group as sort of an ego boost. I’m not proud to say it, but I used that card to gain respect and awe from the other players. One of these other players was trying to collect every version of Birds of Paradise. He wanted my bird. Bad.

For many months I refused to trade with him. Finally, I broke down and let him make me an offer.

He put about $150 in cards on the table before I finally relented and traded the Birds of Paradise.

I traded that card, not because of the trade value, but because my trading partner really wanted the Birds. He continued to push me until I just gave up my hold on it, rather than continuing to feel pressured.

I still regret that trade to this day.

The reason I regret the trade is not because I felt ripped off on a price scale, but because I held a great deal of sentimental value in that card. To me, that card started me on my journey, and I just gave it away. If you had watched Duck Tales you’ll understand when I say it was my “Number One Dime.”

No amount of cards, nor any monetary value, could replace that card for me.

Luckily for the savvy trader, there are ways to modify value, too. One, very effective way, is a limited time offer. We see this constantly in marketing. “Limited time only, order now!” This works amazingly well with everything from cars to pizza to Magic cards.

Recently I was at one of my local card shops and noticed that he had three Inferno Titans in the case.

The value of those Inferno Titans went up for me because of the time limit. I only needed one to complete my set. But then the need for these Titans jumped, and thus, so did the value.

Hopfully these examples will give you something to think about the next time you’re cruising the trading tables!