Let’s step back in time for a minute, back to early 2008. It was a Friday night and I walked into a card and comic shop for the first time in almost 10 years. A Magic FNM (Friday Night Magic) was in progress and after watching a game or two my mind was flooded with memories of being a kid and playing Magic with my friends. I had the urge to play once again and spoke with the owner of the shop about   how the best way to get back in would be. I didn’t know a single soul at that store and wasn’t sure I could afford getting back into it. After talking with the owner for a little while, however, I was convinced to get back into Magic. The best way to do that, I figured, would be to buy a box of the newest set and a preconstructed deck. Unfortunately, I didn’t have that much cash on me so I settled for the preconstructed deck.

After a few horrible FNMs I was considering dropping the game because I couldn’t afford to be competitive. Then came a day where I was just hanging around the local shop, talking with a bunch of the people I’ve met over the last couple of weeks, and I was talking to them about dropping the game because of finances. After this a guy who I had quickly become friends with proposed that we start to pool cards. Pooling cards, for those of you who are unfamiliar with that term, is the process of multiple people sharing product so as to cut down on the cost of playing. At the time this seemed like an amazing idea. “You mean I get to play Magic and the cost of everything is split? Sign me up.”

Cut to a few months later and I was becoming a more competitive Magic player and so was my friend. We didn’t compensate for that, however, and only had 4-ofs of the Type 2 staples back then. When I wanted to pilot Faeries and he wanted to pilot B/W Tokens we could only build one of the decks because we only owned 4 Bitterblossom. Consequently I began to try and find a way to acquire the cards for myself. I considered trading for what I wanted for about 5 minutes before I realized that would not work because of the card pool factor. I didn’t have a whole lot of extra cash so I was kind of stuck between a rock and a hard place. 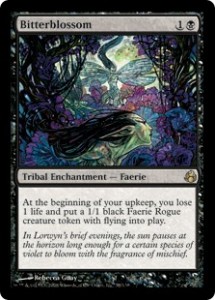 That was the situation up until about 4 months ago when I headed to a tournament with a deck list completely set out and had play-tested for weeks in preparation. I had everything minus a few Jace, the Mindsculptors and some fetchlands but was fine because I was told I could use the other Jaces from the pool of cards. After I arrived at the event I wrote out my deck list and waited for my friend to show up and hand me the cards to finish sleeving up. When he got there, however, I was told that he was going to use the Jaces for his homebrew deck. I was stunned, there I was sitting at the event tables with my deck list already filled out and actually can’t run it because my teammate changed his mind and wouldn’t let me use the cards for the deck that we decided that I should play. That was the last straw for me, I picked up my cards, registered a jankie mono-red list and proceeded to go 1-2 and drop from the tournament. After I dropped I took what cards I had in my possession and headed over to the trade tables. I walked away from that tournament with over a $100 in cash and enough cards to start up a trade binder. Now I’m relatively sure that I could have walked away with a lot more but I was angry from the day and was looking for specific cards that I thought I needed.

That was a big mistake, and a mistake that anyone could have made in that sort of mindset. It was after this that I decided to trade my way up to owning playsets of the cards that I couldn’t afford with cash and was going to do it with whatever I had in my binder. That is where I am today. The proud owner of 4 Jace, the Mindsculptors among a list of Type 2 staples including: the titans, fetchlands, and have even gotten into trading for Legacy staples. Now you may be like I was, struggling to gather the cards to be a competitive player or looking at the prices of cards online and wondering how anyone could afford to play in Type 2.

That’s where I come in, I’m here to show you that it is possible to own those cards without spending the cash for them. It is possible to get a Type 2 deck that’s competitive without giving an arm and a leg for it. I’m proof of it. By using my strategies for trading you will be able to acquire those seemingly unobtainable cards. Now you may be thinking to yourself that I was just lucky and that it isn’t feasible, but you’re incorrect! It is possible and I will teach you the strategies and mannerisms that must be learned in order to do it.

First thing you must do, and this is going to be hard to hear, is you must break all emotional attachments to cards. What I mean is that first Sun Titan that you opened from your first pack ever, is up for grabs. I understand that it means a lot to you and you have it in a nice white sleeve but the fact is that Sun Titan is a card that can be used to further your goal of obtaining that Jace, or that Primeval Titan. This step is possibly the hardest for a lot of people to get over and one of the things that will help you get through this step is to constantly say to yourself, “The cards will come back.” I tell myself this after every trade I do because it’s true, those pieces of cardboard will come back to you, eventually. The hardest thing I had to do was trade away one of my Jaces, I did this because I knew that eventually I would get one back but that didn’t make it any less difficult to do. After that though I’ve never really thought twice about letting a card go unless I am somehow losing a substantial amount of value on my cards, which leads to the second step.

Don’t worry about always gaining value, this could possibly be the thing holding most starting traders back. When a person who has never traded before opens their binder to someone for the first time they believe that their cards are worth a whole lot more than they are, part of that is because of the emotional hold on the cards and the other is that they aren’t really sure of the true value of a card so they go way over when asked. So do your homework, look up the prices of your cards and don’t be fooled by people who will try and trick you into thinking one of your cards isn’t worth a lot. My strategy for trading with people is to tell them a few different values, one being what the retail on the card is, the other being what I will give them in trade value for it. I’m being honest about what a card is worth on both ends this way and I am not looked at strangely when I say a Sun Titan is roughly $6 retail but can only give you $4.50 in trade. 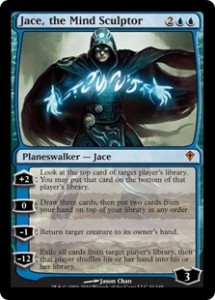 Lastly, as far as beginning strategies go, you must absolutely trade for everything you can. This is because when you trade for everything you are able to trade with everyone. This opens opportunities that you might not have had a chance to get otherwise. When I show up at a tournament or even if I just stop by the shop on my way home I make a point to trade with everyone there, even if it’s something as small as a uncommon for bulk rare trade. It’s the Magic trader’s way of networking, and by trading with everyone you learn what people look for and want. For example, there is a local at the shop I go to that I know wants white and equipment foils for his deck, I know this because when I trade with him that’s all he wants. By using this knowledge I am able to trade for those cards at the bigger events I go to and bring them back to the local shop and show him that I’m always on the lookout for those cards for him. This act gives the impression that you are not just out for yourself but that you are genuinely a good person.

Start using these strategies at your local shop or in between rounds at an FNM and you’ll soon see that more and more people will be open to trading with you. As someone who literally came from barely a Magic card to my name to now owning my current collection and being known as one of the bigger traders in town here I can assure you that these strategies work. It’s not easy and it’s not an overnight deal. You have to work at it and be willing to lose a little to gain a lot.

15 thoughts on “#followfriday: Let’s Begin at the Beginning”