Sigh…if only. I really do need to think up a better introduction.

Anyways, welcome one and all to another Whinston’s Whisdom here on Quietspeculation.com. Following last week’s article, which seemed to go over much better, I’ll not be including any trades in this article, even Pack to Power (as I didn’t get the opportunity to trade over the past week). Today I want to focus on one new deck in the Standard metagame, and look forward to some predicted shifts that you should be ready for. 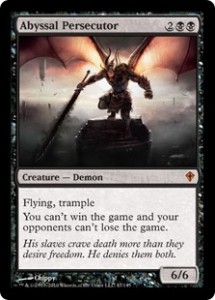 First off, we’re returning to Blue/Bluck control. The lasttime I brought this deck up, it had just won the State Champs in New York. However, this past weekend, Nick Sapgnolo won with this deck AGAIN, taking down the TCGPlayer 5k with a practically identical list. If you didn’t think U/B was a contender before, time to eat some crow, ‘cuz this thing is here to stay. Before I move on to look at a list, I want to just take a quick look at the place of Control in the metagame. At the moment, there are 3 main archetypes: U/R, U/W, and U/B. U/R is the consensus worst, though perhaps the best against Aggressive decks, but U/W and U/B continue to battle it out for supremacy. But with a recent addition to U/B I feel Spagnolo’s deck is more than equipped to be the top dog. Ladies and gentleman, I present to you U/B Control:

A note before we continue, this list is a hybrid of my list that I play online and Gerry Thompson’s list that he posted in his latest article. That said, let’s start from the top.

Abyssal Persecutor: if Wurmcoil Engine is Titan #6, this guy is #7. Though he fell out of favor when Alara Block was still legal, with the copious spot removal gone from the format, the Persecutor has become a much stronger creature. True, there are fewer ways to kill him after your opponent is “dead”, but this deck has effectively 9 ways to kill him, and he can always serve as a blocker until you find a removal spell. Persecutor is absolutely ridiculous, and you can’t wait to pick him up. He’s already gone up 30% on MTGO in the past week, and as I always say, MTGO is one of the best indicators of paper prices.

Frost Titan: though the deck only runs 2 to make room for Abyssal Persecutor, Frost Titan is just as dominating as he always was. Another card that has shot up even more on MTGO. The week after States, it rose by 150%. It’s gone up another 50% above that in the past week, up to 11-12 tickets from 3. While I think it’s too late to capitalize much on this one, just keep it in mind to avoid taking losses trading them away.

Trinket Mage Package: this is one of the elements I like least about the deck. The package feels very clunky to me, even though it is obviously good and killing Persecutors, buying time against Red decks, and reusing business spells in the Control mirror. I would like to replace this with something, but I don’t know what. Not much financial importance here. Brittle Effigy is the only Rare, but it’s worthwhile to remember that it sells for 1.5 tix online.

Only 5 Jaces? Yep, only 5. Another thing I’ve noticed about Control is the radical shift that it’s gone through in just the past few weeks. At States, everyone advocated the Tap-Out, many threats plan. Since then, most decks have turned to increased countermagic and a more permission based control. Not only better against the mirror, but permission based control also has an easier time against random rogue decks, and the aggro portion of the field. Big Jace has remained relatively stable for a while now, but I would try to pick a few copies up just before Extended season, as I expect to see him there. Little Jace on the other hand has become more and more important, directly proportional to the rise of big Jace. Little Jace is up 31% on MTGO in the past week, up to 6-6.5 tickets.

Consuming Vapors and Consume the Meek: An anti-aggro package, where Consuming Vapors can also kill your own Persecutor. I havn’t been impressed with the Vapors, mainly because the majority of the aggro decks in the format play many cheap, crappy creatures (Memnite, Llanowar Elves…), reducing it’s effectiveness. You may just want to cut it for a maindeck Memoricide (more on that later) or another counterspell.

Creeping Tarpit: The best manland in Standard, no contest. I think Tarpit singlehandedly makes U/B the dominant control deck, because of how it breaks open the mirror. It doesn’t matter how many Wall of Omens your opponent has, their Jace is still dead. And their other Jace. Then their Elspeth. And then them. It’s 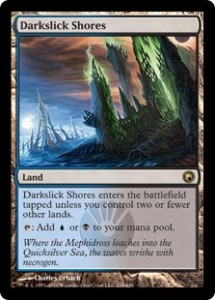 not often you see a land take a large price hike, but Tarpit is up 60% in the past week. Luckily, most people in the paper world are not onto his yet, so take advantage of this gap while it lasts.

Darkslick Shore: I’m not sure I like 4 of these, but by cutting Frost Titans for Persecutor’s you gain a lower curve, so I guess it’s probably fine. Shore is also the most expensive of the Scars duals, showing the affect that the U/B hype has on the pricing of its cards.

The only notable Sideboard card for the deck is Memoricide. While originally played in the maindeck, I don’t feel as if it serves the same role that it did, now that it is a known quantity. Still an extremely powerful card for the mirror and ramp matchups which deserves 3-4 slots in the Sideboard. This has also gone up, 60% in the past week.

And there you have it, Standard’s U/B Control in all its glory. The hype surrounding the deck is immense, especially on MTGO, so you should be looking to sell cards for the deck rather than buy them up, unless you have a very slow local market. I hope this has helped you gain a bit of insight into one of the most competitive new Standard decks in the metagame, and most likely a force for months to come.

Pack to Power will resume next week,