As a beginning trader you might be asking yourself some fundamental questions about how to proceed onto getting your starting collection up and running and be able to build the standard deck of your choosing. Last article I went over some of the basic things to keep in mind while trading, things such as building local relationships and breaking the emotional connection to the pieces of cardboard. Some questions you might be asking yourself are things such as: How do I approach someone for a trade? What numbers and values to use? What things should I first be looking for?

The answer to each of these questions is very deep and each one can be written about in depth. Yet, as a starting trader, you only need to know the short answer to them in order to get your card stock flowing. That is a phrase you should latch onto, keep the card stock flowing, because, like water, anything that sits in your binder for too long becomes stagnant and stale. Most of the locals around here know my stock is constantly changing and keep coming back to check and see if I've picked up anything new in my travels. Keep that in mind when acquiring cards and pulling in new stock. Now, to answer the first question: How do I approach someone for a trade?

The answer is not to run up to someone you've never seen and yell out “Got trades?” while shoving your binder into their face. It has been done to me and I know a few people who do it themselves. Yes, it may work every now and then and you will get the trades but you won't be developing skills as a trader or building any relationships with the local playerbase. The strategy I use the most is to sit down with the players at my local shop and just talk Magic with them, by doing this I establish that I'm not just interested in gaining cards but I actually enjoy the game. I'll play a game or two casually to see what kind of 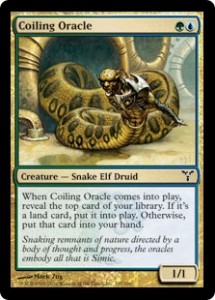 player they are, this is an important step: knowing who you are dealing with. This is one of the first things I try and nail when attempting to start a trade, who exactly I'm dealing with. By playing a game or two with them you are able to pick up more clearly what they are interested in, whether it be casual or competitive. If you shuffle up and they play a second turn Coiling Oracle you know that they are more than likely a casual player and generally not interested in Type 2 cards. This information will set up the rest of the trade and will steer it in certain directions.

So during the games I'll try and strike up a conversation and see what kinds of cards this person might be interested in, maybe they like token decks or perhaps are one of those mono-black players who no matter what will never play another color and worship Nantuko Shade and Phyrexian Negator. Whatever the case may be you need to find out what the person's interests are. As an aside, you may be wondering why you even care and why you have to waste time getting to know this random. The point of it is to build a bridge and make a network connection, this person may not have that Underground Sea that you've been hoping to find but his friend might. On more than one occasion I've had someone flipping through my binder and see a card that he knew his friend would want, instead of trading me for it he had his friend come over and trade for it. It might not happen all the time but it is something to keep in mind. Now back to our casual player above, after a few games and some chit chat I may ask him if he's looking for any specific cards for his decks. Now sometimes you will just get a flat out “No.” That's the end of that, there isn't a whole lot you can do except say, “Ok,” and maybe play a game or two more. If you do get a few cards mentioned and you happen to have them stocked go ahead and mention politely that you have some of those and would be willing to trade them. At this point you've either started the trade or have gotten the lethal: “I don't trade.” If you have taken lethal don't act like a jerk and storm off just thank them for the games and turn to the next player.

On to the next round, the actual trade and the answer to the question of “What values to use?” This is a tricky one, because you might have a specific price in mind for your cards and don't want to detour from that. The answer I'm going to tell you is try and stay away from valuing cards and throwing numbers out onto the table as much as possible. Numbers and dollar values scare people and will cost you more trades in the long run. Now if the person asks what something is worth, tell them. Don't lie or say you don't know, just straight up tell them a high and low and what you are willing to give them in trade value. Take a card like Noble Hierarch for example, currently it's price sits high at 15$ and low at 10$, if someone asked me what that card was worth I would tell them that it hovers between those two numbers and give them a trade value for it. What I recommend, however, is to ask them what they put their cards at first, ask them what they value Noble Hierarch at, if they say 20$ then keep that number in your head and start pulling cards out of their binder until you've reached their determined value of 20$, if it all adds up in your head then make the trade, if not, see if you can get a few dollar throw ins to make up the difference. By trading this way you are by no means determining a price for the cards or trying to shark people, you are merely trading cards on their terms.

Last but not least, what exactly should you be looking for at the start. A lot of people have different suggestions, some say to break down money cards into smaller 3-4$ rares and then trade those back up but I say to find the staples of Magic, not just Type 2 staples but staples all across the board. The first thing I recommend going for are lands, you can't play Magic without lands and everybody wants them. I've traded playsets of fetchlands for Elspeth Tirel and Venser, the Sojourner, I've traded M11 dual lands and Worldwake Manlands for Revised Dual lands, granted I have a lot of them and can afford to trade out playsets the way I do but when trading random rares see if you can find the occasional land in their binder. Most people who have a 1-of or 2-of just sitting there won't mind getting rid of them because they figure if they don't have 4 there isn't a point in playing them. Eventually you will see that you have multiple playsets sitting in your trade box waiting. Lands are an investment and most people would rather trade for them then spend the 20-25$ cash on a playset of duals. Look at the top decks currently in standard and try and pick up the core cards of it, by keeping current with the new tech off of Twitter or any of the pro sites you can catch a trend just before it happens and turn a quick profit. EDH players require lots of artifact ramp and tutors for their decks, things like Sol Ring, Demonic Tutor, Damnation, Wrath of God are always good to have. Casual money cards should be acquired relatively cheap but are big money cards when it comes to trading because of their odd high price, things like Doubling Season, Bribery, Transmute Artifact. Study your prices and keep an eye on the hot new decks coming out and you should be able to gain momentum on your collection within a month or two.

2 thoughts on “Starting Off”