Quite often I've seen writers, myself included, talk about how buyers determine the price of cards. In our everyday experience this relationship seems to go the other way around. Price is rarely negotiable. When we say that if a price of a card is x dollars and buyers are willing to pay x dollars for it this means very little if you are only willing to spend y dollars.

Perhaps you are interested in purchasing a Jace, the Mind Sculptor that your LGS has for sale. Unfortunately they want $85 for it but you only have $70. It is unlikely that you will be able to get the Jace off them for that price because of the high demand for Jaces. Pretty much every store, however, has some cards that have been sitting in their case gathering dust for some time. These cards may have some wiggle room with regard to price.

Before Scars was released I traded away most of my Alara block cards before they dropped in value. Normally I would have already had a playset of the entire block but I was taking a break during its heyday so I only picked up the cards I needed as I was busy acquiring Zendikar block cards. Now I want to complete my collection.

Alara Reborn cards are pretty cheap across the board with the exceptions of Maelstrom Pulse and Sphinx of the Steel Wind. I went down to one of the stores in my area and looked through their ARB binder. They had about 60 rares and mythics including full playsets of a bunch of them.

The first thing you should know about any store you regularly shop at is where they get their prices from and how often they update. In this case I knew they generally used Starcity prices. They don't have spectacular prices for their ARB stuff but I wanted to see what kind of a deal I could get. I told them I would be interested in buying all of their cards if they would be willing to give me a discount. 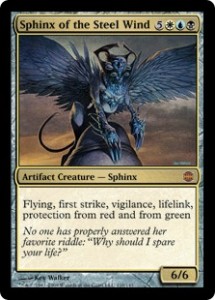 In my opinion a store would be pretty insane to not give a discount on a purchase like this. First of all there were no high value cards in the lot. There were a couple of $1-3 cards but most were bulk. As a collector I'm still interested in at least a playset of bulk so I'm happy to get them if I don't have to pay much (or anything) for them.

Since the set is no longer Standard legal and Extended season is still some time away (and not very popular) these cards are probably not going to sell anytime soon. At best they would probably sell a couple of them to casual or EDH players. By selling the whole lot of them, even at a discount, they are coming out ahead.

So now the big question came down to how much of a discount they would give me. The quoted price was $28 which wasn't a terrible price but definitely more than I was willing to pay. At this point I had two options. The first was to see about talking them down on the price but I didn't think I would be able to get the price down to what I was comfortable paying so I decided to go with a second option.

This store is trying to improve their selection of Standard singles so they are buying cards in limited quantities. Another good thing to know about a store is how they price cards they are buying. In this case they look at the sell price on Starcity and discount it. They generally end up giving a price much better than the buylist price. I sold them a Goblin Guide, Basilisk Collar and an Inferno Titan for $16 which brought the price of the lot down to $12 which was fine with me. Generally I don't like to spend cash on cards but being able to get a lot of the bulk easily makes it easier for me to trade for the remaining cards in the future. The higher value cards will be easier to find and it will reduce the need to trade down.

The point of all this is that sometimes you can get a lower price if you just ask. The worst than can happen is that they say no. Another situation I have found where negotiating is possible occurs in stores that generally don't cater to a large Magic crowd.

There are three stores that sell singles at the local mall, and one has a huge variety of singles. They keep the singles in binders labeled by set but these binders are on the floor behind the counter and not easily visible to customers. I've spent some time looking through them and found some goodies. The store is mainly a sports collectibles store but it has a comic store next to it. They seem to draw most of the admittedly small Magic crowd so these singles are just sitting there waiting to be snatched up. Unfortunately every time I am up there the owner or manager is never around and the associate doesn't have the authority to give me a discount.

Keep an eye out for opportunities like these. Even if you aren't a collector you can still use this technique to make a profit. Right now the Alara Reborn cards are low but when Extended season hits some of these might jump up again. I was able to pick up some cards like Finest Hour and Sovereigns which might find a home in decks again. When the new Extended tech rolls in, some of those bulk rares could skyrocket if they combine with cards in other sets. If nothing else you can always bulk them out. You would have to get a much better deal than I did if that was your end goal but by keeping an open mind to negotiating you will be able to make a profit where you otherwise wouldn't.

Next week I will discuss some methods I use for organizing my collection and talk about some methods for obtaining harder to find pieces. Now for what seems to have become my weekly moral dilemma: the following trade was offered to me. Someone I know was trying to complete a Standard Elf deck. They offered me a Koth and a Kargan Dragonlord (they were taking apart an RDW deck) for 2 Nissa Revane. The deal is fantastic for me, unless Nissa's blow up which I don't really expect especially since you can buy the DotP promo for next to nothing. I told him this was a terrible deal for him but that I would definitely do it if he really wanted to. He said he had no problem with it and I asked him if he was sure and reiterated that it was a bad deal and even told him how off the prices were. He didn't care and we made the trade.

In this case I don't have a problem with the trade because he offered it, knowing the loss he was taking and I made every effort to make him aware of how one-sided the trade was. The question I have is this. There were quite a few people sitting around us when the trade happened. They saw everything that happened and although they saw me inform him multiple times of how bad the trade was for him, in the end they all saw me make a very lopsided trade. Do you guys think this has the potential to hurt my reputation and if so how much? I hope everyone enjoys their Thanksgiving weekend be sure to stay safe the night before!

15 thoughts on “Negotiating With Dealers”