Survival of the Fittest? 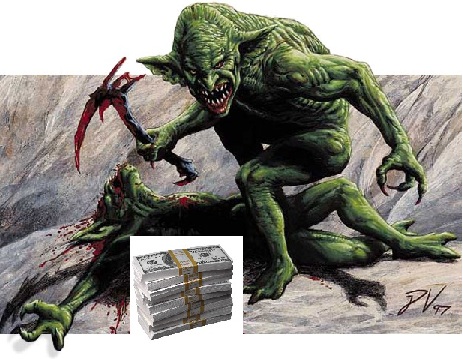 More like Survival of the Fifty-Dollar Bill. (Editor's note: This all feels very familiar. -D.C.)

The Exodus enchantment has shot up in price in a dramatic way. A year ago, you could get them for $9. Now, no dealer will sell below $50. Thanks to incredible demand in Legacy, Survival is just about the hottest card to trade for, since you can still snag them from people who value them at $20.

But you know to pick up those Survivals, you know what they're worth and why they're good. The one thing that nobody is sure of is whether we'll have them to play with, come December. The only real “Act of God” event that happens in Legacy is the Banned List announcement. Survival's days may be numbered.

Today, we're going to talk about whether you should dump your copies of Survival and cash out now, or whether you should hold onto them through the banning period. The DCI is notoriously cagey about how they actually decide what to axe. In previous seasons, they have looked at tournament impact, inherent power, and MTGO tournament results. Their decisions can be honestly characterized as capricious. For example, Mystical Tutor went when Reanimator started winning too much, where Entomb was the lynchpin of the deck.

This makes me worried. I have five copies of Survival of the Fittest. Naturally, I'll be clearing one of them out, but what about those other four? They could represent over $160, or with a banning, their value could evaporate and I would be looking at roughly $10 each (due to casual appeal). Survival is a scary card to look at, and its transition to the new Legacy format was troubling from the start. It has this inherent instability and power, being absurdly undercosted at every step of the way. This makes me really unsure of whether it will make the cut in December (though, with Lion's Eye Diamond being totally egregious and legal, maybe I shouldn't worry...).

Factors in favor of its banning include some stellar tournament results, both with the Vengevine version and the Necrotic Ooze hybrids. On top of that, people like Patrick Chapin and Mike Flores have been talking about how good it is and maybe, just, maybe, that it needs to go. The DCI does check tournament results and occasionally reads articles, so they may actually see Survival as a problem. That said, we have not seen many events that exhibit other decks taking Survival decks seriously. A host of answers, from Leyline of the Void to Pithing Needle, can slow or stop Survival's plans, and we are just beginning to see people pick them up. The DCI does adopt a “wait and see” attitude a lot of time, so there is hope for those who hold Survivals that they will retain their value.

The card will either be banned or legal- Schroedinger's cat is safe. However, the market might respond in different ways. If players are emboldened that Survival is legal, the value could go up a bit. I don't think this would be a big bump or be very likely, since Magic players have only historically responded like this to the closed loophole preventing reprints, which drove up the price of dual lands. Ultimately, I made a few wide-ass guesses and made some predictions to forecast the value of the card. These figures are just my best hunch.

With this kind of prediction, we rate out what the end price is by discounting each price by the likelihood that it will happen. So, a weak reaction to banning is worth $2.50 ($25 x 10%), since it is unlikely to happen – if Survival goes, I think its value will eventually end up at about that of Recurring Nightmare, which also currently only has casual appeal. This chart reflects a 40% chance that Survival will get banned; you can adjust it up or down, based on what you believe is correct.

The math works out that my predicted, current, realistic value of Survival is (12+20+2.5+3) or $37.50. This is well below what the card retails for these days, even below what you could sell them for on buylists. Since the price of Survival of the Fittest is a little over what we think it's worth, it is what the market called an “overpriced asset.” If we could effectively “short” the market, this would be an excellent opportunity. If you have ethical ideas on how to do this, respond in the comments!

If we sell our set, we make $160. If Survival is banned, then we're looking at a loss of probably over $100 that we can avoid by selling. If, however, it is still legal and we want to play with our Survivals, we'll have to rebuy them, potentially at $60 apiece! We would essentially be paying an extra $20 for the privilege of speculating on our cards- though this will only happen the 60% of the time (when it's still legal) so you're only really exposed to a $12 risk.

Armed with this, we can investigate our buy price on the card. Selling the card with the intent to rebuy if it remains legal will mean we make $32.00 (40 – 8 (which comes from .2 x 20 + .4 x 10)), or buylist price minus cost of rebuy). Simply subtract what you paid for yours to determine whether you should dump them. If you bought them back in July when I said to pick them up for $20, you stand to make a lot of money on this, especially if you have no intention of rebuying.

When you think about whether it would be banned, think in the language of what the explanation article would read. “We have always paid attention to repeatable tutors,” they would say, “and Survival of the Fittest is the most egregious offender.” Easy language to write. “Survival can be used to preemptively find answers to cards that would stop it,” you will read, and echo back to the same reasoning you read in their announcement banning Mystical Tutor. I reckon the DCI won't do anything, because whether Survival should go or not, they are not known for getting things right when it comes to banning things that are degenerate in Legacy. When you decide to sell, you must think about all of the factors going into this and rework the chart above to reflect your thoughts – it is always risky to do these kind of things, and it's best that you get the horror and pleasure of bearing the risk based on your rational market analysis.

14 thoughts on “Should You Sell Your Survival of the Fittest?”