I went shopping a bit this last weekend and I saw something that happens to be one of my biggest pet peeves when trying to park. There was a line of cars driving down one particular aisle when the lead car noticed someone walking to their car so they just stopped and waited for them to load the car, get in and drive away so they could get their spot. Meanwhile there are a ton of spots one and two rows over that everyone can see. By the time they parked they could have already been inside shopping. This seems to happen to me every single time I go somewhere so I honestly think I'm just getting trolled by life. Anyway, the point of this story is that Extended season is almost here!

The reason I think that lead car fails to see the other parking spots is that we all tend to focus on our immediate surroundings. Right now the PTQ format is Sealed which doesn't really help us much for trading other than increasing the pool of cards to trade for. The next season is Extended though and it is coming up soon; the last Sealed PTQs are right before Christmas! Unfortunately we haven't seen many Extended results since Scars was released. You can look for online results but until the 6 rounds of Extended we will see at Worlds there isn't going to be much to study.

Fortunately, since Worlds is such a big event, the Extended portion probably won't make a huge splash. Standard will probably get much of the attention since we haven't seen a pro Standard event in awhile. I'll be paying close attention to the Saturday results and I encourage you to do the same. Right now I honestly have no ideas how the format will turn out because like most players who won't be playing at Worlds I haven't played any Extended. If I had to guess I would think that Doran decks might be good since they are able to answer pretty much anything thrown at them but I'm going to wait until Worlds and start my testing from there.

Once those results come in don't just pick up cards for the best decks but also start to look at what cards work well against those decks and try to pick them up. The majority of players will start off by putting together a deck straight from the top so you will want to have those cards available but within a couple of weeks those decks will be getting beat by some other deck and you will want to have those cards as well. By not just focusing on getting the cards for decks that are popular right now you can set yourself up for some good gains down the road.

Now I haven't talked much about internet trading in awhile so I want to spend some time on that. The biggest difference between internet trading and trading in person is that trading over the internet costs money. You have to pay for postage and envelopes, plus you will need some top-loaders and penny sleeves to start. When I first started I sent everything in a bubble mailer and most of my trades included delivery confirmation. That can get expensive and it will easily negate any gains you make in the trades themselves. 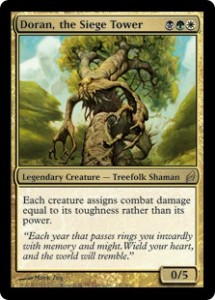 For large trades I still ship the cards with delivery confirmation but for trades under $20 it is much less likely. In those cases I will often just ship them in a toploader and a regular envelope. Mail usually doesn't get lost or damaged so I expect that when it does happen the cost to replace the cards will be less than what I've saved by only paying for a stamp (since the cost of the envelopes is almost negligible). I wouldn't recommend doing this until you are an established trader and you feel comfortable with the person you are trading with. If I am trading with someone who has very few refs and the trade is more than ten dollars I will usually get the delivery confirmation so they can't claim the cards weren't received.
Some traders expect you to send the cards packed with extra care and in those cases you should generally respect their wishes or not make a trade with them. Customer service really is key when trading. The other day I made a trade with someone and after they received my cards they sent me a message claiming that one of the cards I sent them was damaged. I asked for a picture of the card and told them that if the damage was bad enough I would replace it for them. When they sent me the image it was just some light whitening on the border. Some people are more picky about condition than others and as a collector I can respect that. I would have had no problem replacing that card with a mint one and just trading the slightly played one away to someone else.

The worst thing I could have done was argue with him about how small the border whitening was. In the end he was fine with keeping the card but had he wanted to make an exchange I would have had no problems since it was my fault for not letting him know the card was not mint. I also received a message from someone else saying that he had to pay extra postage for something I sent him. This was surprising to me since I take everything to the post office and in that case the post office would have been in the wrong. Still, I offered to pay for the difference although it ended up being a non-issue.

There seem to be tons of new traders looking to trade for profit every week. Trading with them isn't usually going to be worth your while and other players don't usually like to trade with so-called “sharks” so finding ways to separate yourself from the pack is key. Being friendly and providing excellent customer service is the best way. If people enjoy trading with you they will continue to do so in the future and they will be more likely to trade down. When they draft a hot mythic they will look to you first and in this way you can stay top dog in your local community.

What decks do you expect to make a showing at Worlds and what cards are you stocking up on in anticipation for the next PTQ season? Do you expect the new Extended season to raise the popularity of Extended as a format? Right now it isn't very popular but I have a feeling it will pick up. There have been a ton of new players since Lorwyn block and players always seem to enjoy the first Standard decks they played. This will give them a chance to play improved versions of those decks and that is one reason I think it may become more popular than previous Extended formats. What do you guys think?

4 thoughts on “Tis the Season…For a New PTQ Season”