So I’m a dumbass. What else is new? For a financial website, my last article included far too little actual financial advice! I got very caught up in my own personal views on card alters and entirely skipped over the impact that an alteration has on a card’s value. I offered to redo the alter section with more financial advice, but the commenters largely said that they would prefer that someone less biased covered the topic, and I can’t say I disagree. My deepest apologies, and I will insure that nothing like that ever happens again?

With that said, let’s move on to the body of this article. Today, I want to cover ways to make profit during a Limited PTQ season. While Constructed PTQ seasons are field days for dealers and speculators, it’s much harder to make money during the Limited season.

Sealed PTQ seasons are the best place to pick up new Rares and Mythics in anticipation for both FNM and the upcoming Constructed seasons. Card prices fall during Limited season both because of the huge amount of product being opened and also because Limited PTQers who drop early are looking for cash both to recoup their losses and to do side drafts. And guess what happens when they open a Koth in their side draft? They go right over to sell it and hop in another event. However buying cards at events can be difficult. Depending on a TO’s rules, non-dealers might not be allowed to buy or sell cards on site. Trying to do so could easily get you booted or banned from the site, so I wouldn’t recommend being too risky. But buying dealer space at PTQs can also be expensive, so it is a difficult situation all around.

Limited PTQ seasons also generate a huge demand for new card sleeves. While speculators usually don’t carry sleeves, carrying around a good supply of different types, especially the perennial favorite Ultrapro, and you could easily swap some packs for in demand cards with those players less willing to drop cash at the dealer booths. 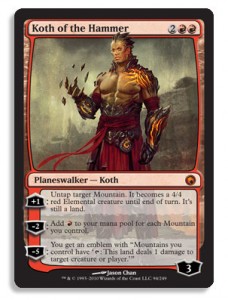 Again, this is more of an issue for dealers or store owners, who have the capability to keep large quantities of sealed product while still maintaining a good stock of singles, as well as those who can get sealed product at discount prices from distributors, but those of you who win/buy large numbers of prize packs could be served well by holding onto them until Limited PTQ season rather than cracking them or selling them later. Most serious PTQ grinders will want to be able to test out the new Limited format, and especially because of the delay in new set releases on MTGO, the only way to practice is to get on down to the local store, and open some old fashioned packs. There should be a higher demand for them during the Limited season than at any other time during the year.

Unfortunately, as you can see, this list is quite short, but hopefully this will help those among you desperately trying to preserve a profit margin during an unfavorable period.

Thankfully, the Limited PTQ season will be coming to a close soon, but right on its heels is the Extended season. So what are the underrated and overlooked cards that you should be looking to speculate on prior to an established metagame?

There have been a few cards that have seen rapid increases in price due to speculation (I’m looking at you Antoine Ruel), but there are still several undiscovered stars that I would recommend picking up.

Chief among these are the top uncommons from the Alara-Zendikar Standard format. Path, Bloodbraid Elf, Sprouting Thrinax and other staples saw a drop in their pricing when they rotated out of the format, but expect to see them hop right back up once they are in demand for Extended. Bloodbraid Elf, in particular sees to make large gains with Jund being one of the most hyped decks going into the season.

Another card that is much more off the beaten path is Master Transmuter. In his column for the Mothership, Jake van Lunen continually produces casual yet somewhat competitive decks for those of us on a stricter budget. Yet every so often, he creates a masterpiece that becomes a large part of the established metagame, such as the Standard version of Pyromancer Ascension. Recently, he posted an article with an Extended Master Transmuter deck, and though I think there are certainly improvements to be made, I wouldn’t think it impossible for the deck to be competitive, especially if the field becomes full of Faeries, White Weenie, or Green based Aggro decks with little or no removal. Because the price is so low currently, there is almost no downside to buying up your local supply, and then turn them around for a killing later on.

The last area to watch out for going into the Extended season is the Merfolk archetype. Merfolk catapulted Marijn Lybaert into the top 4 of PT Amsterdam , and is a strong choice when control is popular in the metagame. While it is fairly cheap, with many of its staple cards being uncommon, there are several cards that you can speculate on, such as Wanderwine Hub, Sygg, River Guide, Cryptic Command, and Ranger of Eos will all make showings if the deck becomes more popular.

Well, that’s all for this week. Again, a bit of a shorter article, but we’re at a bit of a dead zone for financial writes, because we’ve had the new set out for a while, are waiting for the next release, and we’re not in a Constructed PTQ season. I’ll try and do a theory based article next week for a bit of a change.