As a site we are here to promote the use of speculation and smart time buying in order to help you secure profits for yourself. For the most part I would consider this to be a success, as most of the time we're able to get out information on items to buy before they jump and what items to sell before they fall as well. While those readers who stay on top of articles and twitter feeds are commonly able to hit cards just as they go up, this is a double edged sword. Today, we look at the ugly side of the business, its shortcomings and pitfalls, and see if we can do anything to prevent it.

Two weeks ago two people were watching worlds coverage. Person A was reading the articles on match ups, and person B was watching videos and keeping track of twitter. Person A was able to see by round 5 coverage that a few name players were playing UB control, and if he was following standings he would have seen that they were doing well through the day. He has time to buy a few grave titans for resell in the next couple of days for a higher value, or secure other UB control staples that had gone down in price recently, again for profit at the resell. This is a smart move, and if he acted quickly enough he was ahead of the game since, sadly, most people don't truly read anymore.

Person B was watching videos for Deck Tech, and saw the rise of Caw-Go in the hands of Brian Kibler (@bmkibler) and was able to buy Gideon Jura, a card which has seen a slow but steady price drop, at a good rate before everyone else caught on. His window was much smaller since he was competing against everyone else watching the deck tech videos, but his edge was twitter where Kibler himself gave a few hints away. Both situations were profitable if they acted within the time frame before the price jumps happened. This is smart buying and later smart selling. This is the good side of things, but its not always so......

Enter the extended portion of Worlds. We all know the story of Necrotic Ooze and how it exploded for a short time in price as a buy rush hit it. Some people placed large orders for Ooze to resell for profit or trade away at a later point. While some argue that this is morally wrong, I argue that if money was taken from a bank account and you got an order confirmation number, doing anything except shipping the order is bad business, and causes repercussions within the community. 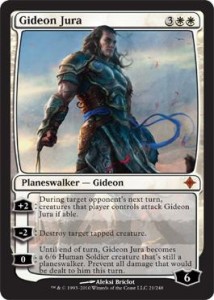 Brian Doran (@MTGveteran) "Matchplay wont ship my bulk order even though they took money out of my bank account, I don't see how vendors get away with this. And so did Shuffle and Cut, they (Shuffle and Cut) didn't even bother giving me a reason other than "due to the card's demand". That's just sloppy."

Moving away from worlds, and onto the Banned and Restricted list announcements, the community was in a buying frenzy, quickly followed by community uproar as multiple orders of Time Spiral were refunded. Not an isolated incident in the least, it quickly gained momentum as people on twitter expressed their outrage at multiple vendors.

(name removed by request) "Card Haus is terrible... They refused to sell me Time spirals for $5 I bought them at because they are out of stock but will have Them back in stock for 29.99.. Are you kidding me?"

Edwin Aragon (@edwin_aragon) "Ordered from gathering ground, and was told they had to refund my order at this time. If I get a order conf # I should get my stuff."

This is the ugly side of this business. Canceled orders, no explanation of refunds, and other underhanded business practices plague our secondary market. Every so often though, someone steps up to do something about it, and sometimes it works such as the Cape Fear Games Fiasco of August which can be read in the link if you're interested in reading about it. This time it seems the champion for the Time Spiral Disaster is Jonathan Medina (@mtgmetagame)

Mtgmetagame "Tweet me the names of the stores who pulled out and if they shipped you any copies. RE: Time Spiral - #letsbattle"

This is basically a call to action on the parts of individuals, and while he posted that tweet as I'm writing this, it will be interesting to see where this goes. I have a feeling that as the secondary market continues to evolve over the next year we will continue to see stores deny and refund orders, but we will also see a growing number of people become very vocal about these issues. I encourage this, because its up to us to protect our market from underhanded business practices such as this.

How else can we protect our market? Some sites are reputable for shipping orders even at a lower price. They aren't taking a "loss" since the product is still being sold, they just aren't capitalizing on the greed factor that other sites are. Supporting these sites helps to encourage their continued customer related business practices. The biggest name in singles also happens to be the best site for this; Starcitygames.com. While their prices tend to be a bit higher from other shops, running $1-$5 on most big ticket items, they also didn't cancel orders for Time Spiral or Necrotic Ooze when they were cheaper. You pay a bit more, but you have a higher chance of actually getting the product you paid for, so I have to give them props. An $8 Time Spiral from them yesterday is better then getting refunded for all of your $5 Time spirals from another site and seeing them reposted at $29.99 today. I have a feeling that the current Time Spiral rush will die down in the next week, and unless its part of the next breakout deck from the Legacy Open, it will see a fate similar to Grim Monolith.

That's all for this week, I figured we needed a bit of controversy to spark some discussion, and I look forward to talking with you more in the discussion portions!If you have any ideas on how else to stop these refunds, speak up!

Ps. How about that Jets/Steelers game?! Go New York!

23 thoughts on “The Repercussions of Events”