Author’s Note: For some reason, I really like writing on controversial topics.  They tend to really speak to me.  Please keep in mind, this is meant to be a neutral piece, and will focus on both sides of the argument.  I am not out for anyone’s head on a pike at all.  Unlike my usual articles, I will not be namedropping any person or business in this article, and I would appreciate it if you provide the same courtesy, should you choose to comment. Whether or not you feel offended at any point in this piece, please try to stick it out until the end. This article has no intent on offending anyone, and is meant to provide perspective on this issue.

This is a situation that has been occurring for a while and has needed a great deal of attention.  Wizards’ R&D has recently adopted a policy in Legacy of opening a door every time they close another.  That is, every time there is an emergency banning in Legacy, at least one other card with little potential for abuse will be taken off the list.  This allows more deck types to arise from the wreckage of the decks that fall apart due to bannings.  Obviously, as good cards become usable in more formats, their prices will rise due to the demand for those cards going up relative to their unchanged supply.  Therefore, it stands to reason that those people who stay on top of the Banned and Restricted list have the potential to make a great deal of money.

Yeah, If you live in Magical Christmasland.

Whenever a card becomes unbanned, players hop onto eBay and other websites to scoop up as many copies of this card as possible.  The next morning, people act surprised when they receive emails from these retailers telling them “The card you ordered is no longer in stock,” “We will contact you when this card is back in stock. The new price will be $30.00,” and any other nonsense they can come up with.  The problem with this is that retailers are outright lying about the quantity of their stock, and are taking players like us for idiots.  While lying to us is a very unsavory practice, all the blame doesn’t really lay on just the retailers’ shoulders.

A Plea to Retailers

The biggest problem with this is a lack of integrity in regards to business practices as a whole.  When websites advertise a certain price for a card, they should have an obligation to fill orders at the listed price.  As consumers, we understand that the point of these businesses is to make as much profit as possible to buy more cards from players, perpetuating the business.  If a dealer really wants to pull cards off the market because of an unforeseen price hike, the least they can do is send out a legitimate, honest apology.  It generates more respect for the dealer when they send an email telling the customer 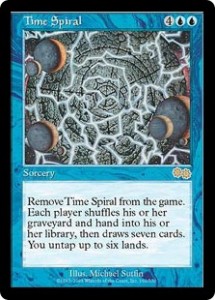 they can’t fill their order because they undercharged them when a business lies about it being beyond their control.

It’s not like some other card games where Banned and Restricted lists are updated sporadically, whenever Wizards feels a card has just become a bit too powerful.  These lists are released once every three months, on the same day of the month each time.  Retailers can easily place a 24-hour hold on all orders containing cards that are on the Banned and Restricted list, with a clear notice on the checkout cart stating why these orders are being held.

Canceling these orders can really be seen as downright scummy for deeper reasons, however.  How many orders were filled with Survival of the Fittest in late December at the full $50-60?  How many people were selling Time Spirals to these retailers at $2, with their cards in transit during the change?  If changes to card economy constitute immediate change in business practice, shouldn’t these retailers be refunding the extra money that Survival of the Fittest is sure to drop, or offer extra money to these players who decided to sell their Time Spirals at $2, whose buy orders have not been processed yet?  Furthermore, if a player cancels several buy or sell orders to or from a dealer, the dealer will blacklist that player.  Players, however, are much more fickle.  With a myriad of stores to deal with, both online and brick-and-mortar, being shafted just once by a store can alienate a customer enough to convince them to discontinue business.

A Plea to Players

Okay, now that the players’ point of view is out of the way, let's play Devil’s advocate for a bit.  While a great deal of players purchase and trade for cards to play the game, quite a few (myself included) do so with the main intent of turning a profit.  As soon as the Banned and Restricted announcement went up, sales of Time Spiral skyrocketed.  Japanese versions were showing up on eBay for $100, and almost every dealer on the internet was “sold out” (legitimately sold out – an order was placed, whether or not it was filled, for each card these sites had in stock) in a matter of hours.  I heard from several players who were going on a Time Spiral shopping spree on Twitter several times.  Honestly, isn’t every person who decided to buy more than their playset being just as scummy as the retailers who decided not to fill these orders?  These retailers canceled these orders because the players were deliberately trying to take advantage of them and the abrupt change in market price.  If you found out right before a trade was completed that the person you were trading with was blatantly trying to rip you off, would you still complete this trade just to be a nice guy?  Hell no.  You would scoop up your cards, exchange a few choice words, or make up some bullshit excuse to get out of the trade.  Who cares if you thought your Japanese Foil Memnarch was only worth ten bucks?  It’s not.  Who cares if the guy you were trading with gets mad and doesn’t want to trade with you anymore?  You don’t want to deal with a rip-off artist anyway.  If you just wanted to buy your four and move on, it’s unfortunate.  But, when you try to buy twenty Time Spirals at five dollars each because you know they’re going to jump up to twenty or more dollars by morning, that’s you.  You’re being “that guy.”

On the same point, how many people sold your Survivals to retailers and other players at $30-40 each, because you knew it was on the chopping block, and didn’t want to get stuck with that value loss?  Who is stuck with that loss now?  These retailers are just using Time Spirals to recoup the losses they are inevitably going to take on the plethora of Survival of the Fittest that have to sit on their digital shelves and collect dust.  Granted, these stores will likely do better than break even on this exchange, but it’s just another example of players taking advantage of dealers.  Taking advantage of 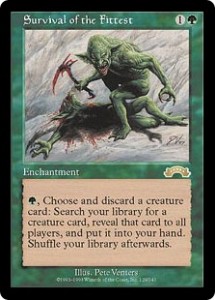 dealers is very easy to do; just look at many of the finance articles here and other sites, and you can find plenty of examples of how to take advantage of dealers who don’t update some of their buy prices.  Why should dealers feel any incentive to be nice to us, when we are just going to take advantage of them whenever we can?

Turning a profit on Legacy (or any format, for that matter) is about speculation.  Investing in a card because you expect it to be good, whether a result of personal preference or because you just happen to be at the breakout tournament and can get a head start on everyone else, is one of the only sure-fire ways to make money.  Trying to get money by cleaning out online retailers is a method that simply will not work – these retailers understand the market and know when they are underselling.

The best way for retailers to maintain loyal customers is simply to be honest.  During Pro Tours and Banned and Restricted announcement times, something as simple as a message to buyers that prices are subject to change, and a letter of apology to players who mass-buy these cards to take advantage of the hike – not for being “out of stock,” but an honest, truthful apology – can go a long way toward keeping customers.  Still selling or offering a reduced price to players who intended to buy four or less can also be an excellent good-faith measure.

In truth, both sides are in the wrong regarding this debate. Just like you, these stores are trying to maximize their profit and minimize their losses.  Remember, placing an order online actually isn’t a legal obligation to ship the product in question if the seller issues a refund.  The best course of action for players is to write a letter to the vendor explaining the dissatisfaction.  Some retailers actually do go out of their way to help loyal customers.

6 thoughts on “Banning and Restricting Retailers”