That's right, I dumped all of my Jace, the Mind Sculptor while at the SCG Open San Jose this weekend. I also met quite a few readers of Quiet Speculation while there, and it was great to see all of you that I did, about 15 people talked with me for a while about cards and the site which was awesome.

So why did I get rid of my Jaces? First, I don't play much standard right now. Frankly I don't like the format much, and I'm playing Jund in extended. Secondly, Jace has an expiration date, which is roughly 6 months from now. While that may be his "price drop" time, dealers will begin buying him for less and less the closer we get to that date. I only see him gaining roughly $10 in dealer value before he starts to take a hit in buy list prices.  If you aren't using your Jaces, now is a great time to sell them off, letting reason win out over greed, and then if you really need them for extended next season, buy them back when they take their big hit in 6 months, and you'll probably secure at least a $20 profit on them. We've seen this before with the "big ticket" items in standard. As soon as they rotate, they lose between 30-50% value, and then climb back up as extended rolls around. For this weeks example, we'll use Thoughtseize.

While the graph isn't fully up to date, it does show its pre-extended lows of 12.55 as the average price. Currently it would cost you more then double that price to buy them from most vendors, and I know that SCG was buying them for $15 each this past weekend. If you were able to secure a few in trades as they rotated either from standard, or at the end of last years extended season, then you stand to make quite a profit selling them or trading them away now.

The price on cards like that won't last though, and every year we see the biggest items fall, sometimes hard, as they rotate. Noble Hierarch, Knight of the Reliquary, and other cards that once commanded a $10 price tag each now have to be sold in pairs to get $10 in cash from a vendor, and don't trade for much over $8 in trade value to most players.

Now that we've examined the past a bit, lets look to the future. We've seen a slew of new cards come out just last night as the official previews began. Thrun, the Last Troll seems like an interesting green creature, but his price will be held back by the fact that he is legendary, has troll shroud  and regenerates so hes hard to kill, conflicting with his status as a legend which makes it unnecessary to run him as a 4 of in decks. He also competes with the other hard to kill green 4 drop, Vengevine, at least for the time being. Being in a smaller set also won't do any favors for his price, since he will be opened more often than if he was a big set mythic. Star City currently has him available for pre order at $19.99, a price which I think is almost twice what it should be, but we all know how the preorders on mythics go. The other cards that caught my eye were the green creature tutor, Green Sun's Zenith and the reshuffling incinerate, Red Sun's Zenith. 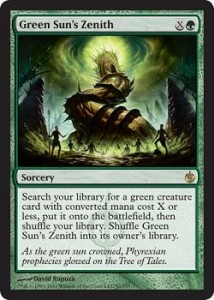 What do these cards have going for them? The single colored mana cost on them makes them easily played in multi colored decks. The fact that they reshuffle after use means they will provide value again later on.

From a cash value perspective, the fact that they aren't mythic is going to work against them. I see them suffering the same problem that Fauna Shaman did, a huge initial demand for them, which drops off as more and more of the set is opened.

So what can we expect? Depending on what the other three look like we could see a cycle of cards that start in high demand for the first few weeks as Spike style players try to complete their set. If no other chase style rares are spoiled, pick these up at pre-releases and release events for as low as possible, and trade them to people that want them to complete their set fast. Beyond the first few weeks of the sets release I expect these to see their price start to fall, and settle between $3 and $6 depending on their usability in the current meta. Green Sun's Zenith is pre-selling for $4.99 (an increase of a full dollar more in the past 12 hours), and Red Sun's Zenith is at 0.99. Both of them seem usable to me, though RSZ seems far more situational since it only hits one creature, but both Banefire and Demonfire saw play when they were in standard. Browsing through twitter I found this comment from @torerotutor

"No, Red Sun's Zenith will not be played in constructed. We do still have Comet Storm. Why does everyone forget that card?"

I partially agree with this. Comet Storm is quite an amazing card, but I could see Red Sun's Zenith seeing some play based on the fact that its repeatable burn, is usable against early game Lotus Cobra's and other early drops, and you will still be able to draw it again later. There are pros and cons to each card, but I think I like RSZ a bit more than comet storm in a ramp deck, or a control style role. 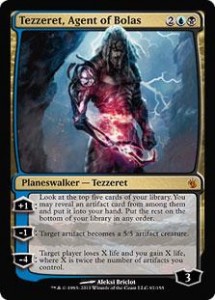 Wrapping it up, we have the newest, and only, planeswalker in the set. Tezzeret, Agent of Bolas. Personally I'm excited about this card and to state the obvious I can see it finding a home in an artifact heavy deck. Such a deck might feature Lux Cannon, Voltaic Key, Everflowing Chalice, Trinket Mage, and other useful/staple UB cards and other artifacts. With Tezzeret preselling at 34.99 at the time of writing, I would say its a bit high for a situational planeswalker.  Trade for them at the prerelease if possible, but I wouldn't pick them up for more than $20 in value, $15 in cash in order to protect yourself against a price drop after the initial hype dies down, and the market finds some kind of stabilization. These planeswalkers are a tricky thing to judge, and I would rather err on the side of caution after seeing what happened to the walkers released in Scars of Mirrodin.

11 thoughts on “I left my Jaces in San Jose”