Over the past four weeks all of us here at Quiet Speculation Financial have bombarded you with information about the upcoming extended season. We took last seasons data and made predictions on good pick up's and things that we felt were good investments. We've analyzed the impact of worlds, and found the fringe cards to try and pick up. We saw the demise of Survival of the Fittest and the potential rise in Time Spiral, and the price spike that went along with it. Three weeks ago might as well have been years in the MTG financial world, because none of it matters anymore. You either picked up the cards for extended or you didn't, you either kept yourself in the black, or put yourself into the red through actions or inaction. Here is my advice; as of now none of the past three weeks matter. We will not bemoan our losses or failures to act, we will look forward to our next potential profit. 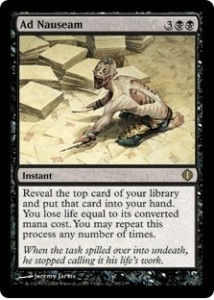 With extended season officially starting, it is now time to look at the next series of events that we can prepare for; standard and legacy. With the SCG Open hitting so many different cities, one is bound to be close enough that you can drive to it.*

While neither format is going to provide you with bank-breaking profit lines, you can still easily do well for yourself if you make the preparations necessary. For this example, I'll put together a list of things I would be looking for if I were attend GP Atlanta January 22-23. Its close enough that buylists should stay mostly the same, but far enough out that I can put some preparation into trading for what I want to sell.

The first thing we have to do is identify who will be there that we want to sell to. I personally enjoy selling to Troll and Toad, Cool Stuff Inc, and Gaming Etc. These three vendors usually make up the cornerstones of all buying and selling I do and have always been fair, flexible, and friendly.

I went to Troll and Toad's buy list first, and quickly found a list of cards I knew I could pick up far below the price I could sell it for. Prices on the end are T&T's buy list price. 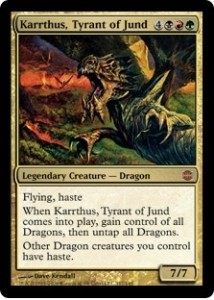 Even selling 1 of each of those nets you almost 35 dollars. if you're able to get your hand on 10 of each, thats almost 350 dollars. If you were to trade for the cards at half their sell value, which for some of those is generous, thats still a profit of $17.50. Not counting the fact that its projected-on-paper to cash-in-hand profits, thats still amazing. The trader who puts in the time and effort to trade even just for those cards could easily pay for his or her entire trip very quickly.  Using the buy list updates we have here on this site can make your work much easier, and often times provide you with excellent results when going to a large event to sell cards. Who knew I could sell Mind Funeral for almost $2.00 a piece?!

Shifting backwards a bit, we can glance at Legacy. With the absence of SotF, it gives us an opportunity to make profits on staples for other decks, namely Goblins, Merfolk, and ANT.

Those three decks will most likely make up a large majority of the decks played in the early SCG Legacy Opens, so if you're looking for a quick turn around, those would be where I would focus in the next few weeks. Currently people are trying to make Time Spiral work, though I don't see a Solidarity / Spring Tide deck making many waves in the face of the current metagame. 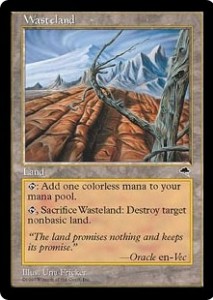 Looking in on the current Blue Chips in Magic such as Force of Will, Jace, the Mind Sculptor, and Wasteland we have to wonder where these may be going. While I don't see Force and Wasteland moving around in price too much, the big question on my mind right now is Jace. Currently you can vendor him off for around $75, and e-bay between $80-$90+ but when Mirrodin Besieged hits, we must realize that the days of Jace may be numbered. Numbered to the effect of about 180, because thats roughly how long he will have left in standard when Mirrodin Besieged comes out. Its no secret that many standard staples take heavy hits in the months before they rotate out, and while Jace may not take as big a hit, unless he shows his power in extended over the next few months he could take as much as a 30% price hit. While 30% may not seem like much on a card that only sells for $5.00, when were talking about Jace that could be a potential $25+ loss. With four Jace's, your looking at a $100+ loss. Watch extended over the next few months, and mark the day the final set of Mirrodin comes out on your calendars. If he hasn't done much for extended it may be worth it to dump your Jace's at or just below peak, an then pick them up again when they hit their bottom a few months after they rotate.

The other side to this argument is that Jace has already seen occasional Legacy play which could help to protect his price, but it would take more than occasional play in Legacy to keep his price at the levels its at now. A perfect example of this would be to look at Tarmogoyf. While its premature cut from Extended hit its value for a while, its crept back up, but never to the highs it was once at. I expect Jace to react in much the same way, and in the coming months we can expect to see the Jace "bubble" pop and his price plummet for a few weeks. Taking advantage of this and playing both sides of the market will help secure your profits by avoiding loss, and reclaiming your stock of Jace at its temporary lower price. If you sell for $90 each and pick them up again for $70 each after they drop you still made $80, and were left without Jace for maybe a month. Its something to consider.

Thats all for this week, the discussion's are open and I'm happy to talk with you. Don't forget the forums!

* Alaska and Hawaii; sorry guys no opens for you.

3 thoughts on “Looking Forward, Looking Back”