Alright, so maybe Magic's preconstructed format won't be making an appearance on the Pro Tour anytime soon, but we can certainly imagine can't we? In a time when we are frequently treated to articles in the community's news outlets and blogosphere about the latest format or twist on Magic's long-held gameplay, why not take a step back from the relentless tide of innovation and experimentation and instead look at something that, like a faithful companion, has been by our side all this time? So imagine with me just for a moment a world where the humble preconstructed deck is as much a fixture on the Pro Tour circuit as any other. Here are some considered reasons that this could happen.

1. Preconstructed Magic is a skill-tester.

It goes without saying that there are a wide range of skills that it takes to be successful in the game, and few are those players who possess them all in abundance. Some can build the core and structure of a solid deck. Others can take that deck and fine-tune it so that it crosses that last 10% to perfection. Some have an uncanny knack for reading the metagame, and have a good sense of what field they'll be facing in a competitive event. Others are superb in the clutch, all focus and steely nerve as they draw their opening hand of cards. And not in any way to denigrate any of those skills that are rendered (quite temporarily) obsolete by the reliance on precon decks, but wouldn't it be interesting to see how the games unfold when players are restricted to using a stock deck?

There's an element to the vintage car racing circuit which mandates that their racers must use stock autos for their races. You can't take a 30-year old car and tune it until the only thing left recognisable is the nameplate, and in the stricter classes you can't really tune it at all. This is a similar premise that's behind the show Deadliest Warrior. The fundamental goal is to take two (or more) things exactly how they existed, and pit them against one another. When the field is restricted to a very tight meta, and everyone knows exactly what they may be facing, it all comes down to luck and playskill on a very level playing field. Do you have what it takes to pilot Path of Blight or Rapid Fire to victory?

Pop quiz: what's the difference between a preconstructed deck and one your buddy built for you the night before a tournament? At the base level, not very much. Both are decks that have been constructed for you to play, one by your buddy and one by Tom LaPille. To be sure, comparison can be made about which deck is more competitive, which has the better cards, and certainly the "who has more mythics" debate will be entirely one-sided, but then it should be remembered that the decks have very different goals in mind.

At the end of the day both are constructed decks. They have a specific goal in mind, and are built to optimise their chances of achieving it (to variable degree). Going into game day you'll know exactly what you are playing with, and can prepare as much as you like against the expected field. You also have the flexibility of choosing a deck from a selected field, being able to match your playstyle with the appropriate deck. Like aggro? Take Battle Cries or Rise of the Vampires. Prefer a more controlling strategy? You might opt for Doom Inevitable or Deadspread. Although the field may not be open-ended as constructed play is accustomed to, it certainly has its variety. 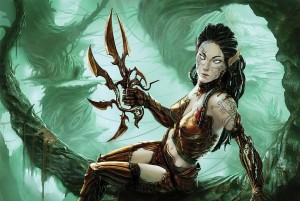 By most any yardstick, one of the game's most successful podcasts is Limited Resources. Devoted to Limited play, principally draft, Marshall and Ryan lend their expertise each week to those who enjoy the highly variable gameplay of the format. Although every once in awhile they painfully try to paint limited as "better" or "more skillful" of the formats – an argument that reminds me of the awkward ones in the high school corridor when the guy wearing the Steve Vai shirt bumped into the Stevie Ray Vaughn fan and they bickered about who the better guitar player was – they are absolutely dead on when they discuss the skills that are needed to excel in Limited and how they differ from Constructed.

One of the best points made here is that every card matters. To understand Constructed play you need to master a much smaller pool of cards than the limited player. A limited player is going to lean on commons and uncommons far more than they will the cards of higher rarity. This all-cards-matter subtext is one that unites some of the other variant formats, ranging from pauper to cube, and the preconstructed format is right in the heart of it. Your intro pack deck stands at 60 cards, of which a whopping two are rare, and without so much as a sniff of a mythic. There's a lot of fun to be had playing cards you don't ordinarily play in the smaller pool of constructed, and certainly with the precon format you get some of the best elements of both formats.

This might not be the sexiest or most compelling reason you'll read today, but it certainly bears mention! Amongst the hue and cry of how players are getting "priced out" of standard, where decks can cost you hundreds of dollars (let's not even get started on extended or legacy), economics is certainly a consideration. With an MSRP of $12.99 an intro pack deck is just the ticket for ensuring a game format accessible to all, and hey, you get a free booster pack thrown into the deal as well. Of course, that's assuming a "Standard" deck pool. There's certainly no reason to say that format couldn't include the earlier theme decks as well, in which case you might be looking at $25-35 or so for the top end of most decks that don't actually include slivers, like Rat's Nest (Umezawa's Jitte) or Distress (Avatar of Woe).

It's all wishful thinking, of course. There's little room on the competitive circuit for another format, particularly one that won't necessarily appeal to many players whose skills aren't able to be leveraged for success. Then again, it can't be any sillier than the high-variance roulette wheel that is sealed deck so there's always hope, right? It's worth considering, and would restore some generous lustre to our old and faithful friend, the preconstructed deck. And it would be very intriguing to see what the hive mind thought of each deck's chances, and how they would do against one another (similar to what we did on the Lament with the 2009-10 Precon Deck Championships recently).

So, here's a question to ponder...

If it did happen, and you had to pick one deck from any set in Standard, which one would you take?