A new week is upon us and with it came a new set. The pre-release has finished, and the release is just a few days away, so with that I'm going to present the current Winners, Stable holders, Losers, and Undervalued items. After that I'll reveal my next project, which I'm sure will help a number of members. 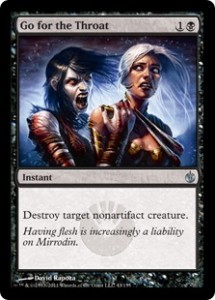 1. Green Sun's Zenith: A card I said would financially act much like Fauna Shaman did. This started its pre-sales weeks ago at just $2.99, and since then has risen to $9.99. Star city is currently buying them for $4, so you're already ahead if you pre-ordered them at $2.99 each.

2. Go for the Throat: Currently sitting at $1.49 for this uncommon, I see this hitting a mark close to Path to Exile. It deals with almost everything, and its only downside, not hitting artifacts, is hardly a downside at all.

3. Blightsteel Colossus: The hype around this card has created quite the demand as people try to get it before it jumps. I see this being a short term demand, which will stabilize between $10 and $15. Since its currently selling for $15 I say trade for them, or open them. If you really have an immediate need for them, then pick them up.

4. Massacre Wurm: This was out of left field to say the least. For the time being, I don't see this being more than an $8 mythic. It will see play in FNM's, and many black casual lists, but with the possibility of Mono Black control, this is one to watch. Sadly, I fear it will see the same fate as my beloved Lux Cannon and its price will be a temporary thing, until it proves its worth on bigger stages than kitchen counters. Expect it to move into the Losers bracket within 2 weeks, so off them now.

5. Inkmoth Nexus No one is surprised about this card, with people claiming that its the next Mutavault its easy to see why its demand and price have been driven up. I think it will find a home in the $10-$15 range, dependent on tournament play, but casual appeal will never let this land fall much below $10.

1. Thrun, the Last Troll: Thrun started at $19.99, and that's still where he sits. I don't expect to see much action from him for a few weeks, and even then I don't think hes a $20 card. Being a hard to kill legend limits his desire to have him in multiples, which will keep his price down overall, whereas Vengevine is a hard to kill non-legendary mythic, which caused its price to spike. I may be proven wrong about this card, but the factors are there to keep his price down.

2. Glissa, the Traitor: Glissa's price will be dictated by the fact that she was the promo card for the faction that was more popular than Mirran at the pre-release. The market currently has a large number of this card floating around, but I know many people are looking for the promo ones given out.

3. Phyrexian Revoker: This has held steady at $5 since it was spoiled, and I would consider pricking a few up. If Pithing Needle isn't reprinted in the next core set then this card can gain a decent about of value. 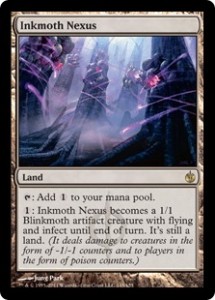 1. Rare cards: Like with every set, the rares are being oppressed by the mythics in the set. Rares that would normally see prices of $5 and up such as Phyrexian Vatmother are only selling for $1.99 currently. With this is mind, sell your high value rares now before they adjust.

2. White, blue, and Red Sun's Zenith: The other three suns haven't seen much in the way of financial gains, which is about what I expected from them. Some are over costed, and others currently don't have much demand for what they do.

1. Black Sun's Zenith: It started and currently stays at $2.99, which is rather low from where I'm looking. It may not be staple now, but its worth picking a few up now because of current demand, and because of its strong possibility of going up in the months ahead.

2. Hero of Oxid Ridge: Haste and the Battlecry mechanic were the right way to do this. His effect on 1 toughness creatures is negligible outside of limited, but his cost for effect is efficient.

Faction Packs: These are going up in value, selling on Ebay for as much as $8. Almost all financial writers have commented that these are worth holding onto, unopened. I see the Phyrexian packs being worth more than the Mirran packs, simple because more of the Phyrexian faction packs were opened. At the two pre-releases I went to Phyrexian players outnumbered Mirran players almost four to one, meaning there will be more Mirran packs available on the market. If you have Mirran packs and want to secure profits, sell them now for $8 if possible or you can wait and see what happens, just know that there will be more Mirran packs coming than Phyrexian. 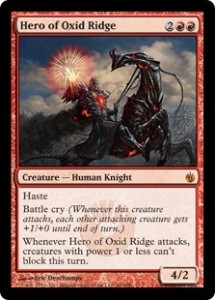 There was a Shape Anew deck on magic-league.com recently that won on the backs of a UB control shell, packing Blightsteel Colossus to Polymorph into. I don't know how legitimate the deck is  in the long run, but currently its seeing an increase in play on Magic Work Station.

The other deck that got a boost from Mirrodin Besieged was Goblins, which made an easy transformation into Signal-Goblins. Using Kuldotha Rebirth and explosive starts fueled by Signal Pest and Mox Opal, it has the makings of an extremely aggressive deck that is something to watch for. I know that Signal Pest was almost impossible to trade off from the few people that had them, so for the time being I'm going to say get them if possible, but be ready to drop them at a moments notice, or if a decent offer is made.

Next week I'm going to begin a new multi-part series focusing on the basics of trading. From evaluations, to snap number quotes, and then branching into the finer details of keeping your trading partners happy while you're still able to turn a profit, my aim is to make this a mainstay of your trading bookmarks, and a reference tool for you to come back to whenever necessary.