Every week I look at the current metagame and wonder where the next innovation is going to be, both for playing and trading purposes. Last week I commented about how the Open series helped these things, and this week I'm going to go against them. This week, we're going to look at why the open series is bad, and why the open series is just like your local card shop. 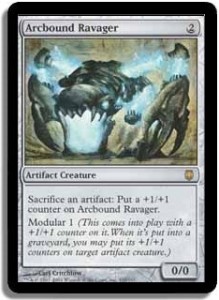 Take a look at the names that are in the standard and legacy top 8. Notice a trend? I know I do. There are a few names there that have the mark of consistency, names that long time open series watchers and participants know. Edgar Flores, Alex Bertoncini, and Gerry Thompson just to name a few. Every week we can expect one of them to hit a top 8 in one of the events, and while they are great players and have earned their spots through good play, smart decisions, and luck; lets face it, it's kinda boring. I can only watch them rip on camera so many times before it becomes a drinking game on Saturday nights: Drink every time (Insert name player here) rips the win.

Maybe that's not a bad idea.

Anyways, take that information, and apply it to your local card shop. You have the 4-6 people that are there regularly that you expect to see in the top 8 or win every week. That's cool and all, but its leads to the biggest problem that faces our community in both a trading and playing aspect: stagnation.

Stagnation kills communities, both in games (including this one), trading, and in the real world. So lets talk about how to stop this evil menace from hurting our game, profits, and lives.

Stagnated games, or more specifically, metagames are usually solved on their own every three months when a new set comes out. This helps to keep things new and alive in this game. The problem comes when we lack innovation on the part of deck builders week to week. I can only see RUG, caw-blade, or UB for so long. Ya know what decks I actually looked at when the top 16 list for Memphis came out? Mono red and Eldrazi ramp. Sure, they've been around but I wanted to see what they used to get to the top 16.

Stagnated trading is something that has been growing worse and worse over the past few months. At local shops its because everyone knows what everyone has, and unless you trade outside of your shops group, its just the same cards being passed around between people. Even open series events have this issue, with everyone there only to make a profit. You will rarely be able to get an even trade unless your partner values something high or low because a majority of people trading at opens are there only to make money. This brings community building and networking to a halt because we're all out for ourselves.

I'll leave those statements for you to think about, now lets move to the financial side of things.

The SCG open in Memphis saw Valakut take the win over the traditional U/W caw-blade deck. Sadly, no real news on the front there to talk about as neither list has changed in ways that are worth investing in. Investment potential did however come from the Legacy side of things, which saw Affinity, Painted Stone, and Eldrazi Post come up in the top 16. 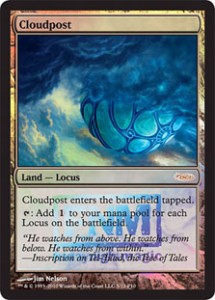 Affinity was rather traditional, with only Arcbound Ravager as its investment. Occasionally you can find the card for a rather low cost, so watching for those opportunities is a great way to score a few dollars. I wouldn't pay more than $10 each on them, and you can by them from the stores for $15.

Painted Stone is a deck that I said to watch for in my legacy article a while back.Painter's Servant has sold out on SCG at $5, but there are still 3 available on CFB for $3.99 each at the time of this writing. Grindstone is also still extremely low in stock, with only 12 of any condition between CFB and SCG, though they will cost you a bit if you're looking to buy them.

Eldrazi Post made use of the already extremely expensive Candleabra of Tawnos to untap the Cloudpost and Glimmerpost lands.  The two cards with money potential here are the FNM promotional Cloudpost, and Vesuva, which brings the total "post" land potential to 12. Easy to see just how quickly you could power out an Eldrazi at that rate.

Speaking of foil commons, ever wondered just what some of them are worth?

Earlier this week @mtgmetagame posed a question: Without looking it up, how much is a foil squadron hawk worth?

A shocking number, I tell you. between 10 and 20+ dollars each. Just take a look at some of these completed listings.

Insane! I wish my signature was worth an average of $10. Speaking of Kibbler,  he did a tournament in Riverside, CA this past weekend where he piloted standard infect. Rumor has it he's going to be trying to deck tech it at the SCG Open in LA. Here's the cards I would be trying to get ASAP.

Inkmoth nexus has already seen a rise in demand because of architect control, but if Kibbler places well in the SCG Open Los Angeles, expect it to gain more. Vatmother and Crusader are primed for a decent bump as well, and hopefully you got them a while back for nearly nothing. If you're going to speculate on them, foil ones can be bought for 3.99 each at CFB or SCG.

That's about it for this week. Leave me a comment, let me know what you think, what you want to see in the future, or just say hey.

4 thoughts on “Chasing Down the Stag.”