UPDATE 7/19/2011: A followup article, Investigating Innistrad, covers specific cards from Core Set 2012 that have big, big implications for this exciting upcoming set!  Check it out!

Twitter and assorted other social media are abuzz with speculation about the new set revealed today.  Innistrad, the initial set of its block due for release in the fall of 2011, has been officially announced. This confirms the report that its name had been registered as a trademark in December.  While speculation on specific cards doesn't really make sense right now, it's helpful to know what to watch for as future details are revealed.  There are many community opinions, and they vary wildly.  Some of these will likely prove true, so having the heads-up on potential trends is a great advantage.

The set's called Innistrad.  As Doug Linn pointed out in Memphis this weekend, a vampire named Strahd is a central character in the Dungeons and Dragons Ravenloft module, and considered to be one of the greatest villains in D&D history.  Wizards of the Coast owns the Dungeons and Dragons license.  A tidied-up Liliana Vess and the threat that  "Horror Lurks Within" strongly implies a Gothic Horror world similar to those of  Castlevania and Ravenloft.

Considering the current vampire population of the Magic Nation is low, a fresh boat of neckbiters  from Innistrad could certainly stir up some economic unrest.  Vampires have always been marginalized as a tribe. Their best tribal Lord was Vampire Nocturnus, a former $20 all-star, was cut from the core set.  People were outraged!  They killed off an entire deck in one card.   This is almost as bad as when they cut Birds of Paradise from the Core set.  Wait a minute, what happened after they cut Birds?

They reprinted it in the Fall set, in Ravnica.  Are they about to pull the ol' switcheroo on us again?  Vampire Nocturnus was a really popular card with appeal to all groups of Magic players at once.  It was cut from Standard for no reason.  Why is it gone?  Because they're bringing it back.  In this set.  I'm calling it right now, and if I'm wrong, I will tape a Vampire Nocturnus to my chest with the words "I'M DUMB" written in sparkly sharpie marker.   I will wear this to the next event and everyone can point and laugh.

This is clearly baseless speculation, but it does suggest a very valid scenario.  Why would they cut a massively popular card from a core set?  Because it fits the flavor of the next set so much better that they didn't want to reprint it twice in the span of 3 months.  It makes perfect sense, and it's pretty clever problem-solving by whomever at R&D made this choice.  It's a distinct possibility considering the fact that Vampires disappeared from the set in Scars of Mirrodin.  Another instance of saving the flavor for the next set?  If they'd made another Mephidross Vampire in Scars, we'd be all vamp'ed out by the time Innistrad unleashed a horde of bloodsuckers on us.

Trick Jarrett, who runs Mananation.com, has the following to say about Innistrad and its Vampire inhabitants.

We know Baron Sengir wasn't from Ulgrotha, the plane for Homelands, so my conjecture is that we are going to visit his plane, which is also the origin of Liliana Vess.  Wizards introduced us to Vampires as a core race with Zendikar, then they let up on the gas with Scars so that they can hit them again in Innistrad. Liliana has been revealed to not be in M11, allowing Sorin Markov to replace her in that line-up, which now makes sense so that they can introduce Liliana 2.0 in Innistrad.

Don't go rushing out to buy Homelands Baron Sengir cards or Sengir Vampires.  Its more likely that we're visiting his home plane which suggests he will return in Planeswalker form.  By the way, Sorin Markov has a grudge against someone.  He seems to be able to kill most things that are alive and survived an entire plane being reduced to dust.   I wonder what or whom he couldn't kill, and what this eternal grudge might be.  A couple of vampire Planeswalkers could certainly cause a big fuss if they got to fighting.  Still, Nicol Bolas from Legends didn't gain value after Nicol Bolas, Planeswalker was printed, so there's not really a "buy" here.
As far as other vampires are concerned, Kalastria Highborne might become a valuable Extended player in a year or so once Lorwyn leaves the format.  Its price will surely dip this summer, and it might be worth investing at that point.  Captivating Vampire could prove deadly alongside a host of new vampires of all shapes and sizes.  On a vamp-centric Plane, vampire tokens are not out of the question.  We might see Nocturnus or a comparable Lord-type creature bring the deck to Tier 1 status, so hoarding cheap vampire rares of that caliber is a good risk.  They often retain value due to the casual crowd, so you won't lose much if our ideas are blatantly wrong.  Hey, always helps to have a good exit strategy, right?

Every time a new set gets announced, we get to step right up, spin the wheel, and play Future Sight Funhouse.  It's an exciting game of luck and skill that asks you to answer one simple question, "what cards from Future Sight will be in this set?"  What fun.  This week's contestant is Street Wraith, from none other than the Future Sight expansion.  Welcome our guest with a warm round of applause.   He's a creepy little dude, ain't he?
While the tournament implications of this are probably irrelevant, this is a "card flavor" home run waiting to happen.  People love the idea of hiding previews in older sets, and it would cause a great buzz.  The flavor of the card is already incredible, so from the perspective of someone who truly enjoys the flavor of cards, this would be quite a cool reprint.  The financial implications are, sadly, none.  They can't all be winners, people. 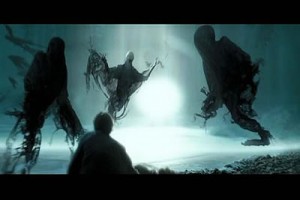 Enough Already With the Vampires

So, we're all bled out about vampires.  What else is in the set that doesn't actively seek to drain your blood?  Well, Werewolves are a common horror trope, and any good horror world needs at least two.  A whole tribe of Lorwyn-style Lords and efficient utility creatures would make Standard sound like Van Hellsing.  Just print me up a Cursed Scroll and call it a Crossbow, and I'll be a happy Timmy.
While Lycanthropes might be the bane of vampires, there could be all kinds of cool Homelands-style ghosts and ghoulies.  Let's see some Ghost Hounds come out to play.  Bring on a less color-specific Spectral Bears.  Let's see some of those crazy undead soul-sucking monsters from Harry Potter, or a reasonable facsimile thereof.  There are a wealth of creatures that could inhabit this dark Gothic realm, and it will be wonderful to see just how much influence is drawn from the other Gothic Horror Fantasy universes.  Keep an eye out for more references, such as the one in the set's name.
The world of Innistrad looks to be a miserable place full of darkness and things that go "Kill" in the night.  It'll be like Shadowmoor meets Ravnica.  If there's a character named "Rigens Norab", I'm crying "bad form."  We'll surely know the financial implications of this once we have actual information, which won't be until mid to late Summer 2011.  Until then, consider slowly acquiring some of the more relevant vampires that could see tournament play.  This could be as good for the vamps as Mirrodin was for Artifacts.
--
Like what you see here and want to help Quiet Speculation grow?  Sign up for Insider! You'll get access to our expert financial advice and the indispensable prediction tracker, and you'll be helping us add new features to the site!
Don't forget to check out  Investigating Innistrad, which covers specific cards from Core Set 2012 that have big, big implications for this exciting upcoming set!

30 thoughts on “Investing In Innistrad”