So I'll make it easy and just jump on the bandwagon, and bow before our new Phyrexian Overlords! Hooray! Actually I'm more excited about it all because this means its crash time in the financial and speculation community. New sets always give some of the freshest margins as we begin figuring out what to buy now and what to hold off on. While we don't know a lot of the new cards, we do already know a few of the mythics, and most of them are pretty good. We're going to put our faith in the MTGSalvation community this week and go with their "confirmed" list of new cards, and evaluate from there.

First guy I want to address? Urabrask, the Hidden. This guy is a beast (but not really, his creature type is praetor after all. 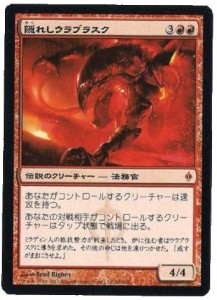 So what abilities does a 4/4 mythic creature for 5 have? Creatures you control have haste, and creatures your opponents control enter the battlefield tapped. Not terrible, though I think he costs a bit too much for his Kismet effect to help much. Awesome art, cool flavor, but I don't see him seeing any major constructed play at this moment.

Reason: Commander players will eat this thing up. Hes legendary, and has an awesome effect overall for a multi-player format. Might benefit you to have one or two in the first few weeks after the pre-release, but I wouldn't be investing in him too heavily.

Up next is one of the two mythics I would classify as the big hype cards. This one has the possibility to pan out, as its abilities are quite strong. Yep, I'm talking about Phyrexian Canceler. 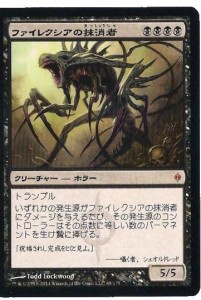 So, we give it similar art to a Phyrexian Negator, a very similar name (negator, canceler), make it cost 1 more, and make it a mythic. Oh, did I leave out the part where its 100X better?

Here's the translation on the card:

Whenever a source deals damage to Phyrexian Canceler, that source's controller sacrifices that many permanents.

I also misread it the first few times, but its a reverse Negator, if they lightning bolt it, they sac 3 permanents. This thing is nuts!

Reason: As awesome as this card is, it needs deck support to justify a higher price. It won't be long until people are building mono black, in all forms of both control and aggro to make the best use of this card, but I have a feeling that those projects will fall to the wayside. The rest of the support may be here for him in the remainder of the set, and time will tell.

The next card is a Grand example of Phyrexian power.

That's right, all bad jokes aside this one is for Elesh Norn, Grand Cenobite. For the small investment on 7 mana, you get a 4/7 Vigilance creature that gives all your creatures +2/+2, and all theirs -2/2. Awesome effect, and 7 is a good late game number for control decks against aggro. Will she see play though? Perhaps in a few decks here and there, but I don't seem her being a mythic staple card. Sadly, her biggest role will probably be commanding in Commander, where just like Urabrask, the Hidden, she will probably do the most good. Her abilities however may prove me wrong 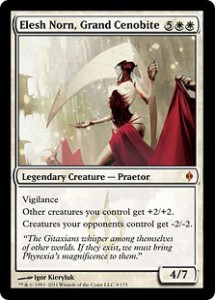 Reason: She's strong enough to see fringe play in constructed, and Commander players will love her even more than Urabrask, the Hidden. Assuming she's not the pre release or release party card, I would currently say she is decently positioned to be the mid level mythic of the set.

Side note: Ever have one of those feelings that you're looking at one of the promo cards? Yeah, I'm getting that here. It remains to be seen, but this has my vote for "most likely to be a promo".

Alright, so we've covered most of the mythics, leaving the "Big One" for last. Personally I feel cheated that they did this to a famous character of the old MTG story, but it was bound to happen again. I give you, Karn the Released!

He breaks the common conception of "4 mana planeswalker good, others bad" because seeing his abilities we can clearly see that he has some insane power. Here's the stats; 7 mana buys you a starting 6 loyalty. for +4, you can make target player exile a card from their hand. for -3, you exile target permanent. for a massive -14, you set aside all non-aura permanent cards exiled with Karn, and restart the game. Then put all cards set aside this way onto the battlefield under your control. 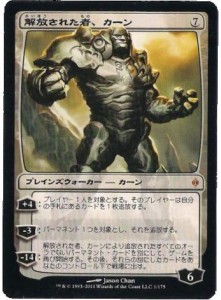 Alright, I'm a skeptic, I'll admit it. I know WOTC isn't too hot about making games start over, so this one is the only card that I'm currently looking at and thinking its possibly not real. We have been surprised by WOTC moves lately though, and part of speculation is working with unknown factors so I'll roll with it.

Reason: Seven mana is nothing to get to in today's deck environment. It has a way to protect its self, it gains massive positive loyalty, and its ultimate is probably one of the most "ultimate" feeling that I've seen aside from Jace and Bolas. This might be even more awesome than theirs, but just by a little bit.

Does this mean you should be buying Karn? Perhaps, but that's a decent chunk of change to wager on something that's not 100% confirmed. SCG did however say that the text may not be 100% accurate, so at this point its buyer beware. If this is the text on Karn however, I would expect a run on him the moment its confirmed. He is a lot of "firsts" for a planeswalker. First colorless one, first one that restarts games, first time I've considered getting more than 4 on pre order. Regardless, for the time being only Elesh Norn is confirmed. Give it a bit more time and we'll have more solid cards. Thanks for reading!

6 thoughts on “Our New Overlords!”