Once the news broke late last week that a pair of [card Stoneforge Mystic]Stoneforge Mystics[/card] will be included in the upcoming New Phyrexia Event Deck War of Attrition, the proverbial cat had been quite firmly set amongst the pigeons. When the previous two Event Decks were released, there was a lot of curiosity and speculation. How well were the decks designed? What was the value of the cards included? What affect would that inclusion have on the prices of the individual cards?

It's one thing when the card in greatest question is a long-time staple of a tier 1.5 deck like the Goblin Guide, but another beast entirely when it's the hot-as-blazes Stoneforge Mystic, the stalwart component of the very top-tier deck (Caw-Blade, and its variants). Languishing for some time as a $5 rare, she shot up to five times that amount in a very short time and has remained there ever since. This has become a situation not unlike the From the Vaults, where the sum of the parts is in obvious excess to the sticker price of the sealed product itself. For the other Event Deck, Rot Within, the only card getting any significant notice is a singleton Inkmoth Nexus.

This means that the following two things will occur once the Event Decks are released on June 10th.

1. Some retailers will honor the sticker price, and this will exert pressure to deflate the price of the Stoneforge Mystic

2. Some retailers will raise their retail price past the $24.95 sticker price, and this will exert pressure to stabilize the price of a Stoneforge Mystic, though the increased availability will still force prices in a downward direction

The amount that the first option happens relative to the second option will give you an idea where Stoneforge Mystic will end up, but that's a topic for the keen financial minds who make up Quiet Speculation's Finance team (and who are already hard at work on the matter). Our interest lies more in what the price of the Event Deck will be.

In my ongoing series The Precon Deck Buyer's Guide, I've collected pricing data from seven of today's leading online retailers. I'll be revisiting those same retailers to get an idea of how the market is playing out in this early stage for the New Phyrexia Event Decks. 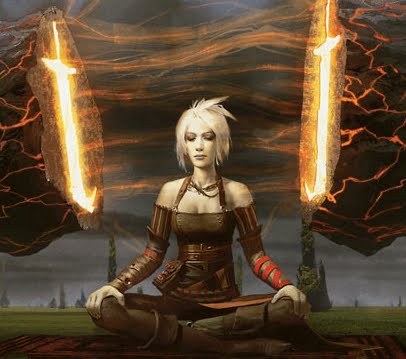 ABU Games (Boise, Idaho): Abu Games didn't have the Event Deck decks listed on their website. This being the kind of hard-hitting journalism you've come to expect from Magic Beyond the Box, I wasn't satisfied with leaving it there and instead gave the store a call. The clerk I spoke to, I'll call him 'S', didn't know offhand but kindly offered to go find out for me. After a brief hold, 'S' told me that they will not be doing preorders, but that I could expect to see them available for order once they'd been released.

Channel Fireball (San Jose, California): As one of the top retailers, I was not surprised to see both decks already up for order. At time of writing, Channel Fireball is asking $24.99 for Rot Within, the Green infect deck, which is the sticker price, but they've put up War of Attrition at $34.99. No cheap Stoneforge Mystics for you!

Card Kingdom (Seattle, Washington): No prices listed here, either! Their number isn't listed on their website (that I saw), so I used the massive power of the Internet to find it (See: Yellow Pages). This is a bit of a pet peeve of mine as I work for an insurance company, and I know the inability to get a live person on the line can be a major frustration to customers.

Once I called them, like ABU Games I was answered by a live clerk right away, and we'll call her 'M.' 'M' was extremely friendly, and gave me the best customer service I'd receive all day. Per 'M,' Card Kingdom's current practice is to list new sealed product for preorder a month in advance for large releases, and a fortnight in advance for the smaller ones. I next asked her about their expected pricing, and was told that they don't try to mark the products up "that much" over the MSRP.

In other words, we can reasonably expect to see preorder availability around May 27th, and that the price for War of Attrition will quite possibly exceed $24.99.

MTG Fanatic (Houston, Texas): No preorder information here either, and no phone number. I used the Internet again to source a landline for them, and was greeted by a robo-message. "Hello. We are not available now. Please try again."

StarCityGames (Roanoke, Virginia): The other site (besides CFB) that I most expected to see preorder availability from, and I was not disappointed. Like CFB, SCG had inflated their price for War of Attrition to $29.99. However unpalatable that may be to some, there's a silver lining here in that they actually reduced the cost of Rot Within to $19.99. If that's not enough for you, they also offer a package deal: both decks for $39.98. This means that once you add shipping into the mix, you're getting both decks for about retail price, a fair deal and the best on the day.

Troll and Toad (Corbin, Kentucky): No preorder information, making the day disappointingly scant, but unlike most of the others T&T had their phone number easily found on their website. Naturally, I rang them up and after passing through a phone tree (which I don't mind, I appreciate the efficiency increase) I landed on the line of 'T,' one of their customer service agents.

'T' had some surprising (and mildly alarming) news for me: Troll & Toad won't be offering any new sealed product, but instead be focusing on the singles market. I hadn't heard this anywhere, and I wanted some details. No sooner had I pressed 'T' for additional clarification on this policy, a fire alarm went off in their building and 'T' urgently, if somewhat politely, ended the call. For a brief moment, I wondered if I had asked one of the "forbidden questions" and 'T' had just pressed a button on her computer screen to eject from the call, but in all seriousness I hope things are okay down in Corbin.

Amazon (Everywhere): Amazon acts as a sort of mercantile aggregator, giving virtual floor space to a slew of small-time operators. Rot Within was listed with a price of $24.95, but no such luck with War of Attrition: it simply wasn't there at all.

To be fair, we're a bit early with our inquiries, though Channel Fireball and StarCityGames are poised to have the lion's share of early business as the others scramble to catch up. Quiet Speculation will continue to monitor developments both with Stoneforge Mystics and the decks themselves as we begin to feel out this new format. This being only the second set of Event Decks released, it will make for some interesting discoveries!

11 thoughts on “On Stoneforge: Precon Preordering”