With the release of New Phyrexia this past weekend, I wanted to do something with the new cards. So naturally my attention was grabbed by a card that was printed three blocks ago. I always forget about Bloom Tender. It has a very powerful effect, and it's an elf, which makes it a popular card to begin with, but these go great in any commander deck with green in it, which explains why I never see them in binders. 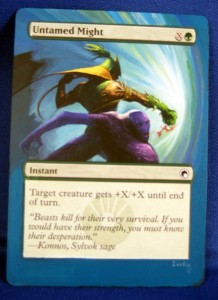 Before we begin today’s' project, I wanted to send a shout out to a reader. His name is Frank and he's been using the techniques he learned here to great effect. Aside from the the Untamed Might shown here, he also has altered a couple of Brainstorms which he has traded at $15 each. Let's break that down for a second. Frank took a $3 card, put an hour of work into it, and traded it for $15. That's $12 per hour, or a Scalding Tarn. Well done Frank!

Tending to the project...

I was initially fooled by the color palette of this card. The overall effect is a dark purple sky, when in reality the background is a fairly light shade of lavender. This caused me to use a black base coat, whereas I will suggest to you a white or purple base coat for your project. I also chose to extend the branch over the text box, so it was necessary to sketch that area out as well with the base coat as well. You may wish to leave this out of yours of course, but I think it draws the viewer in to the artwork very well. 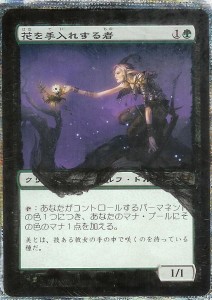 After some difficulty with the color matching (see above) I found that the mixture was rather a simple one. Use Naphthol Red, Ultramarine Blue, with a Touch of Titanium White to create the darker purple above and around the name box, and work your way lighter by adding white. I found that by adding just the smallest amount of water to the mixture, the colors blended smoothly to help match the subtle gradients in the sky. This gave me a very well matched first layer to work with. I also brought the color farther down the border of the card than usual to allow the branch to show along the right side. 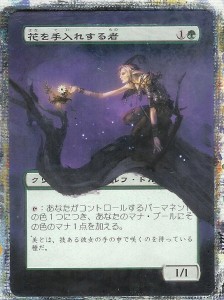 The branch itself is actually a very dark shade of purple. I used the same mixture that I used for the sky, and added some Mars Black, little by little until I reached that grayish dark purple hue. Once again with a slightly damp mixture, brush the color on as if the branch were receiving another base coat. From there, add the lavender color from the lightest parts of the sky to help match the highlights and bare spots in the bark. Be careful, even though this is a highlight, the color is still somewhat dark. I dry-brushed this color on to the base of the branch to add some texture.

At this point I let the project sit overnight, having been somewhat frustrated by the color matching debacle earlier. As I have said before, it's acceptable and sometimes beneficial to walk away from a project. This time away not only allows you to clear your head, but also may give you a fresh view of the project when you return. My fresh view the next day helped me notice that I could have blended the sky better in places, and that parts of the branch were not tended to properly.

With this new lease on the project, I mixed up that lavender color again, and repainted the whole sky. This time using a touch 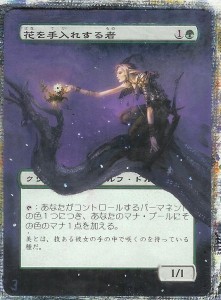 more water than last time to allow the old color to blend and show through a little. Doing this created a near perfect blending of colors with the original artwork (If I may say so). I added a little love to the branch by highlighting certain parts of it. With a very light lavender I began the process as if I were going to dry-brush the color on, but instead I just dabbed the brush along the contours of the wood to create the small patterns you see in the finished product. For a last finishing touch I took a small line brush (the smallest I have) and added the very small white dots which, while I don’t know exactly what they are intended to be, bring the whole piece together.

So far we have worked around the text box, and over the text box by varying degrees. Next week, we will be working without it! I haven't decided on a particular card yet, but I always love suggestions. Also keep sending me your work and ideas!

One thought on “Tender Blooms”