When I was growing up–we're talking the 80's–I was absolutely fascinated with Dungeons & Dragons. I'd come across it young when one of my schoolyard mates broke out the old 'red box'. We huddled around the steps poring through the books, passing around the plastic polyhedral dice and white crayon (for colouring in the numbers), and staring at the blank character record sheet as the gateway to limitless possibility.

Of course, those were heady and perilous days. For some, role-playing games (RPGs) were a dangerous psychological trap for the unwary, a notion which landed Tom Hanks his first major starring role. For others, the moral panic of the day decreed that the Devil not only infested our music, but his infernal reach extended to our pastimes as well.

Through it all gaming endured (the jury's still out on the music), and in the pages of Dragon Magazine at the local library there was one annual event which took on an almost mythical, Camelot-esque quality. Set in the far-flung reaches of distant Wisconsin (I was in Connecticut), every year I would read about Gen Con and marvel at the wonders found therein.

More than two decades later, Gen Con is not only still going strong but it's bigger than ever. It's hard to imagine that this Shangri-La of my youth was at the time drawing in only about 20% of what it attracts today; almost every year has been bigger than the last!

Last week we kicked off our Best Four Days in Gaming Giveaway, with the promise of a pair of entry badges to Gen Con, a Magic: The Gathering Commander deck, a custom Quiet Speculation-themed Commander life pad from MTGPad.com, and a Quiet Speculation t-shirt. Today we'll be announcing our winner, but before we do I'd like to discuss a bit about Gen Con itself, and give those attending (or thinking about attending) some idea of what's available.

Held every year since 1968, Gen Con moved from Wisconsin to its current home in Indianapolis, Indiana in 2003. For one long weekend, the Indiana Convention Center becomes a gamer's mecca.  From artists' and writers' symposiums to miniatures painting to a costume contest to a wall full of games to play, there truly is something here for almost any interest. While you'll find a full list of all the things to do at their website or Facebook page, here are just a few highlights to get you started. 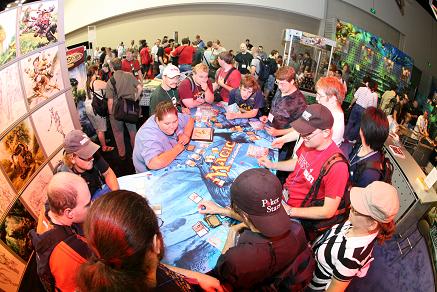 1. Have Jeff Miracola sign your Propaganda. Or Hollow Dogs. Or your brand-new M12 Manabarbs. Or any of the other one-hundred-and-seven Magic cards this year's Artist Guest of Honor has given visual life to.

2. Have an interest in breaking into the gaming industry? You could probably learn a few things from these distinguished gentlemen. Even if you're perfectly happy in your non-gaming career, isn't it always fun to pop the hood and see what's under there? These are some of the minds who built it.

3. Take on Tracy Hickman–the creator of Dragonlance–in the role of a murderous DM, with nothing between you but your Level 1 character, in the longstanding Gen Con tradition Killer Breakfast. Do you have the wits to stay alive as your partymembers are killed off, one more entertainingly than the next, endlessly replaced by eager members of the audience? And speaking of Dragonlance, say hello to Margaret Weis while you're at it.

4. Stop in at Wizards of the Coast's exhibition. See what's new at White Wolf. Check out some chain mail or try on a kilt. Then see what else is on offer at the nearly three hundred different exhibitor's booths that will be happy to show you their wares.

5. Immerse yourself in a real-life Dungeons & Dragons experience with True Dungeon. This year's adventure is The Lair of the Sea Lich, and after you've vanquished evil beneath the waves for a few unforgettable hours you can save your treasure tokens for next time, kick them down to a friend, or even sell them on eBay.

Now for the fun part: choosing a winner for the Four Best Days in Gaming giveaway!

There Can Be Only One

We had a number of entertaining 'bad beats' stories for both Commander and Magic in general, but in the end we only had one prize package to award. Each of our five judges–Sheldon Menery, Jack LaCroix, Carlos Gutierrez, Neale Talbot, and Robby Rothe–read through the stories posted by each contestant, then submitted their thoughts on the stories as well as their pick for overall winner. We put all five in a hat, shook it up and had Ertai's Lament's very own Sam draw one at random.

Neale perhaps said it best when he nominated Steven "for losing to a Myr Welder when playing mono-blue. It's always great to see such an assumed innocuous card bring down the pain. It also shows how thinking through your outs can get you past the toughest spots through some of the unlikeliest of paths in Commander."

Congratulations, Steven! You've won the Best Four Days in Gaming Giveaway! We'll be in touch shortly to get a shipping address, and your glorious prize package will be speeding on its way.

An honorable mention surely must go to reader @RelentlessRats for his bad beats story, which received a sympathetic mention from more than one of the judges. Carlos shared his reasons for the nod "because of the time and effort put into making his bad beat fun to read. ... It involved a mishmash of luck, miss-evaluation, misplays, and really was just a terrible beat story.  Really. I've just got to appreciate that a game that could have been summed up with 'sometimes [card=Azami, Lady of Scrolls]Azami[/card] happens' was actually pretty epic and entertaining!"

A special thanks to all of those who entered, and to our five judges. Truly, we would not have the community we do were it not for the labors and passions of each of you.

That's all for now, I'll be back next week with The Best Four Minutes in Reading. That is, of course, assuming you define that as a discussion on the Magic 2012 Intro Packs. See you then!