Hello everyone! My name is Pat McGregor and this is the beginning of a new Insider series.

I have had a few decent accomplishments in Magic, such a GP Top 8, two Star City wins as well as Top 8ing the Star City Invitational.  But I am not here to talk to you about all the sweet road trips I've taken.  I am here to tell you how I play most of my Magic: grinding out tickets in the comfort of my very own home.

Why, might you ask, is this local curmudgeon qualified to tell me about MODO and the deals and profits to be made within?

I am cheap.  Cheap as hellllll.

I shop with coupons and my wallet is full of frequent member cards for every restaurant, gas station or store that I go to.  I am a Market Maven, as you'd know if you have ever read the book Tipping Point by Malcolm Gladwell.

I sleep drink and eat deals.  This means that when I get invested in a system such as MODO, I immediately search for the most efficient ways to eek tickets out of everything I do.

This article will be a purely financial look at MODO, mainly honing in on the difference between trading and speculating in real life versus online.

Let's start off with a list of the main things that may not be apparent on the MODO market and what they mean to you as an investor.

These Are the Basics For Understanding the System:

You cannot exploit the normal knowledge gap from trade to trade.

You’re not trading with Johnny Pack Cracker, and Billy Rare For Rare.  You are trading with heartless robots that feed on your tickets.  The few people you do trade with are very hard to get value out of because they can easily look at what the bots are selling cards for. This is very different from real life and makes getting value on MODO much harder because you cannot use your salesmanship and personality to get good trades.

On the plus side, this means that when you find something you want to invest in, you can buy it in bulk in a very short period of time instead of trying to grind it out with traders.

A recent example of this was when Modern was announced.  A LOT of people made money buying all of the bots out of Modern staples within minutes.

On lower end cards (<1 tic), they are generally marking cards up 30%. On medium level cards (<5 tix), they make a 15-20% profit. And on everything above that, it is usually 15% or less.  Compared to real dealers who give nickels and dimes for cards, then proceed to sell them for dollars, this is a huge improvement.  Even on premium paper cards, you are very unlikely to get much more that 50% of what the dealer’s sale price on an item is.

In real life, a card has to go up drastically in value for you to be able to say you made money from buying and selling it for cash with no other work involved.  If you buy a paper card for $10, it typically has to go up to $20 before you even break even when working with dealers.  Online, however, it only has to go up to maybe $2 or $3 to break even.

This means that you stand to have far more “hits” as cards need to move up far less, percentage wise, for you to make monetary gain.  This also makes missing on speculations much less costly.  As long as the card in question did not go down too much, you can most likely sell it back to the bot you bought it from for a small to medium loss.  This is unlike real life, where your cards will be nothing more than a stack of shame.

Since there is only one avenue to get rid of cards (the classifieds), values drop very quickly.  A lot of people who draft sell all the rares immediately to get more tix for drafting again.

Liliana is currently about 17 tix and slowly stabilizing. Cards that have seen little or no play are even worse off.  Our good friend Skaab Ruinator is a whopping 2 tix online and release events haven't even been going for a week yet.  This is even more pronounced with non-mythics, which usually fetch a buck or two in real life end up being pennies online.

This is actually a very good thing when looking at it from an investors point of view: it costs very little to buy up a card in bulk.  Buying three or four hundred of a non-played rare is $20-50, compared to $300-400 in paper.  Which one are you more likely to take a chance with?

4.  There is No Casual Community

I realize that one, if not both, of the casual MODO players might attempt to refute this... but it's true.

For the most part, unless your cards are tournament caliber they are worth very little.  There are very few virtual kitchen tables that casual players are crowding around.  You cannot trade sweet tribal and EDH cards for value unless there are special [card Vampire Nocturnus]circumstances[/card]. This heavily skews the market towards the cream of the crop cards.

This is a big downside to online because there are far fewer formats to take advantage of when looking at a card's value. On the plus side, when a card that is both casual and competitive hits the market, it is usually much cheaper online.

The Zendikar fetches are a great example of this (note: Legacy is, for all intents and purposes, a casual format online).  For a long time Misty Rainforest's were less than 2 tickets since the only relevant format they were in was Standard.  Even now, most of the fetches are under 3, and Modern is only a few months away...

5.  Cards Only Hold Value If They Are Played

This has been explained in other Magic trading articles, but this essentially means that most cards are valued based on their current play ability, not what they used to be or what they have spiked to before.

Things like Frost Titan spike from almost nothing then drop immediately when new tech is released. When an article goes up with someone hawking a card as the “New [card Druidic Satchel]Squadron[/card] [card Daybreak Ranger] Hawk[/card]”, the price rockets up within hours on MODO.

However, a lot of the time this is due to speculation. Not necessarily playability or value.

Once it becomes apparent that not everyone wants to play Satchel Control, or that werewolves don’t historically beat [card Twilight Mire] any [/card] [card Underworld Dreams] mythical [/card] [card True Conviction] creature[/card], [card Bloodlord of Vaasgoth] including [/card] titans, the value drops just as quickly as it rose.

If you examine the price curve of Druidic Satchel, it goes up from .07 to 1.0 in only 12 or so hours due to Mike Flores praising Garruk’s man purse as "insane".

All of the bots were sold out and multiple people had classifieds up selling the card for 1. The only problem is that the card wasn’t actually being played in anything. It went back down to .12 a day later. 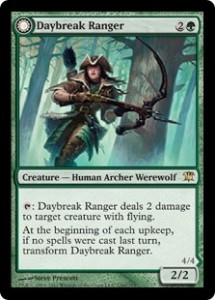 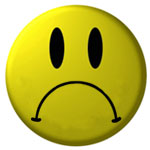 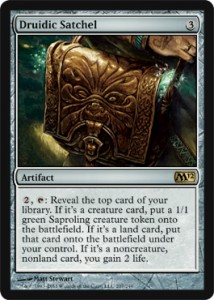 Druidic Satchel may have some niche place in Standard in the future, but the entire reason for the inflation was pure speculation.  It is sometimes difficult to figure out which cards this will happen to, so the best rule of thumb is to get out sooner rather than later with non-mythic,  [card Stoneforge Mystic]non-broken[/card] rares.

This exact same thing happened in real life with Brian Kibler’s boasting about Daybreak Ranger being good in the new Standard.  I can safely say that the same price spike and drop would have happened with Teen Wolf,  had he been released on MODO at the time of the article.

I am not saying you should not trust strategy writers. It is simply that these cards were not battle tested significantly to show that the decks they are used in would be anywhere close to Tier 1.

6.  There Is a Lot of Speculation On MODO

Following the previous point, it is especially important to realize when a card is going to stick at an inflated value because it is being played or if it is just a quick hype spike waiting for a drop.

Watch some daily results.  If the deck the new cards go in is nowhere in sight, dump them while you can.  People start playing new things immediately on MODO, so hype vs playability gets sorted out much more quickly.

7.  There Are No Collectors

A lot of players constantly cycle through all of the good cards in their collection on a yearly basis, selling out of and buying into every new format.  This is most pronounced in the Modern season. It spikes in popularity when it's PTQ season (January through March) and dies very quickly thereafter.

This happens with paper magic, too, but the prices seem to go down a lot further online than in real life, coming back to my previous point of things not holding value unless they are played.  This is where a good portion of the  long term money to be made on MODO is.

If you have a decent bankroll, just buy up all of the cards that are good in Modern right after the season ends and then wait 9 months.  If you are unsure of what cards will go up, just invest in dual lands and fetches.  Every single Modern deck will end up needing them and they always go up during the season.

You can actually buy Modern staples at any time up to the PTQ season's actual starting. You will just get better deals the earlier you do it.

So What Can We Take Away From All of This?

Thanks a lot for reading!  I realize this may feel fairly elementary for some, but I did not know most of these things when I entered the MODO community with my first Stronghold sealed. And I am happy to ensure you do.

7 thoughts on “Insider: Gaming the System”